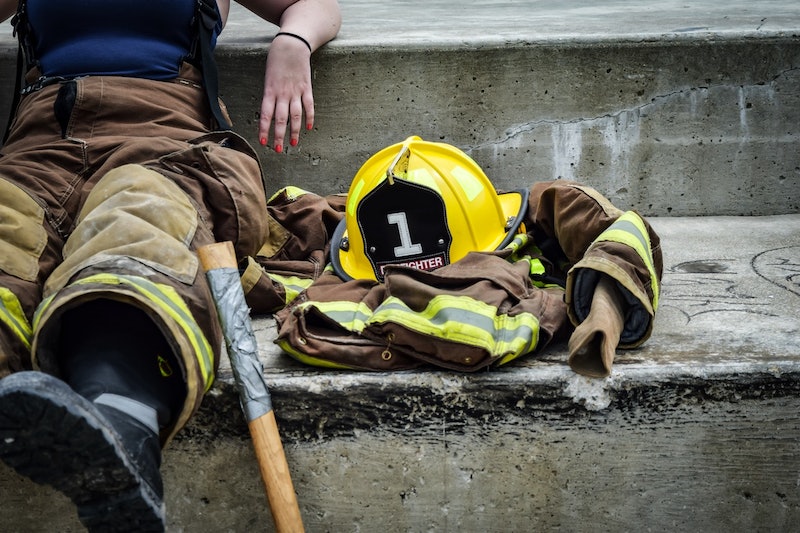 April 4, 2017 is Equal Pay Day, and while data proves that women make up to 22 percent less than men for doing the same job, many still refuse to believe the wage gap exists. A wage gap infographic from the Economic Policy Institute (EPI) illustrates some of the reasoning used to mansplain away why men still earn more than women in every field.

What's more is that the date chosen to highlight the wage gap between men and women is not arbitrary. April 4 is how far women have to work into 2017 to earn as much as their male counterparts did in 2016, according to the EPI.

In addition to wage-gap deniers, there are also people who don't believe women deserve or need an equal wage, you know because their husbands should be taking care of them. In a letter to the editor published Feb. 15 in both the Wasatch Wave and Park Record newspapers in Utah, Wasatch County GOP Vice Chairman James C. Green lobbied that women should not receive equal pay for doing the same job as men because (now, I'm paraphrasing a little here) it could disrupt the outdated patriarchal nuclear family unit that's designed to keep women at home barefoot and pregnant where they belong.

Mansplaining away the wage gap by reinforcing patriarchal mores designed to keep women submissive is repulsive. Here are some of the things you might hear on Equal Pay Day about why you earn less, and here's how to respond.

How To Respond: According to the EPI, there is much greater parity at the lower end of the wage distribution, likely because minimum wages and other labor market policies create a wage floor. However, women still earn less than men in almost every occupation even after controlling for race and ethnicity, education, experience, and location.

2. Mansplaining Myth: Men Earn More Because They Are More Educated

How To Respond: Women are paid less than similarly educated men at every level of education, according to the EPI's gender-pay-gap guide by Elise Gould, Jessica Schieder, and Kathleen Geier. And the wage gap tends to rise with education level. Women with advanced degrees often earn less than man with bachelor's degress.

3. Mansplaining Myth: Women Don't Need As Much Money Because They Don't Support Families

How To Respond: There are almost 10 million households in the U.S. headed by single mothers, according to the 2015 U.S. Census. What's more is that more than 50 percent of the population is single (meaning not married). Women don't pay less for things like housing, transportation, or medical care. In fact women often pay more for goods and services (like haircuts, razors, etc.) than men thanks to the Pink Tax.

How To Respond: The gender wage gap is largest at the top of the wage distribution, with women at the 95th percentile getting paid 73.8 percent of wages at the male 95th percentile, according to the EPI's Gender-Pay-Gap Guide. "Economist Claudia Goldin argues that women in high-wage professions experience a wider gender gap because they are penalized for not working long, inflexible hours, and such rigorous work schedules tend to weigh disproportionately heavily on women, who are still responsible for more housework and child/elder care than men."

How To Respond: After age 40, women’s wage growth plateaus, and then drops off earlier than men’s, according to the EPI. "The growth in the gender wage gap during this time of life reflects the disproportionate impact of family responsibilities on women’s careers. Other research shows that from the beginning of their working lives, women experience a gender wage gap that is still expected to swell significantly over the course of their careers, regardless of education or work experience."

6. Mansplaining Myth: It's Really Not That Big of a Gap

How To Respond: According to the EPI, the average woman worker loses more than $530,000 over the course of her lifetime because of the gender wage gap, and the average college-educated woman loses even more—nearly $800,000. That seems like a pretty big deal to me.

7. Mansplaining Myth: Things Are Getting Better

How To Respond: While women had been closing in on men in the gender wage gap, progress in recent years has stalled, and has barely budged during the past 20 years, according to the EPI.

The data doesn't lie. This April 4, the National Committee on Pay Equity is asking women to wear red to symbolize how far in the "red" women's wages are in relation to men's. And, if you run into a mansplainer on Equal Pay Day, show them the data.

More like this
25 Inspiring Quotes From Black Women To Celebrate Black History Month
By Kyli Rodriguez-Cayro and JR Thorpe
These Are The Fastest Electric Kettles You Can Buy
By Margeaux Baulch Klein
24 History-Making Black Women You Probably Didn't Learn About In School
By Ayana Lage and JR Thorpe
15 Black-Owned Liquor & Wine Brands To Add To Your Bar Cart
By Alexis Morillo
Get Even More From Bustle — Sign Up For The Newsletter
From hair trends to relationship advice, our daily newsletter has everything you need to sound like a person who’s on TikTok, even if you aren’t.