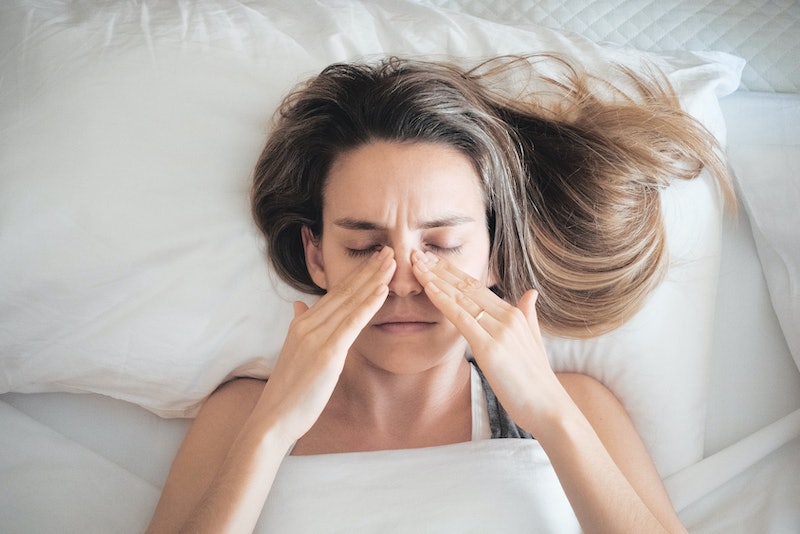 If you've caught the common cold this year, you might put a callout on social media for remedies to help alleviate your misery. And, literally everyone and their grandmother has advice for how to feel better fast, but some of these ways to cure a cold are actually myths. From wearing socks full of onions to sweating out a cold, while some of these myths might make you feel better, others are just plain bizarre, not to mention smelly AF. There are also a lot of misconceptions about how you can catch a cold. For example, your mom probably told you to put on a coat as kid so you wouldn't come down with a cold, but this actually isn't how you get sick.

According to WebMD, "A cold begins when a virus attaches to the lining of your nose or throat. Your immune system — the body's defense against germs — sends out white blood cells to attack this invader." While being chilly or wet doesn't cause a cold, being stressed, sleep deprived, and emotionally drained can lower your immune system and make you more likely to catch a cold. What's more, people who have allergies are also more likely to get a cold.

It's true that there are things you can do to alleviate your nasty cold symptoms, but because the common cold is a virus, things like antibiotics, which fight bacterial infections, won't cure it. WebMD advised that the best defense against a common cold is drinking lots of fluids, and your grandmother's old chicken soup cure actually can help because, "Chicken soup is comforting, plus the steam helps break up nasal congestion." What won't cure a common cold? These ways to cure yourself of a cold are actually just myths.

1. Sweating It Out Will Just Make You Hot

There's an old myth that getting all hot and sweaty when you have a cold can speed up the healing process. While this might make you feel better, it actually doesn't help you get over a cold faster, according to medical experts at Pharmacy­Online.co.uk, the Scotsman reported.

The first thing many people do when they start to feel a cold coming on is reach for the vitamin C. I'm sorry to break it to you, but medical professionals say this is a myth. WebMD reported that 65 years of studies about vitamin C revealed that vitamin C does not prevent colds, but it can shorten their duration if you take a lot. "One large study found that people who took a megadose — 8 grams on the first day they got sick — shortened the length of their colds." So, if you want to try this, you'll have to take eight 1,000 mg tablets of vitamin C, which is a lot of pills to swallow.

3. Putting Onions In Your Socks Is Just Plain Smelly

You'd have to be pretty desperate to try this one. The National Onion Association reported that an old myth suggested that putting onions in your socks before bed can help cure a cold. This myth began in the 1500s when people believed that putting raw onions around the house could ward off the bubonic plague. HealthLine noted that putting onions in your socks may also stem from the Chinese medicinal practice reflexology. I think you can skip this one unless you want to keep people away from you and your home indefinitely.

4. Antibiotics Are Never A Good Idea

Because the cold is a virus, antibiotics won't do anything to help cure it. What's more, taking antibiotics when you don't have a bacterial infection can actually make you more likely to develop antibiotic resistance. This means that when you do actually need antibiotics, they might not work, according to the Mayo Clinic.

OK, I will admit to using this one from time to time, but research indicates that hot toddies, while beneficial when you're well, can actually do more harm than good when you're sick. The Mayo Clinic reported that drinking warm liquids is a good remedy for feeling better, but you might want to skip the alcohol because it can actually lower your immune system, according to the National Institutes of Health. And, a compromised immune system is the last thing you want when trying to recover from a cold.

While a peppermint-oil diffuser might help you breath easier when you have a cold, it actually won't do anything to cure it. How Stuff Works noted that peppermint has been proven to kill some bacterias and funguses in a laboratory environment, but it hasn't yet been proven to do the same thing for the human body. I dab peppermint oil under my nose when I'm congested, and it does help me breather better, but that's pretty much where the cold-curing benefits end.

7. Echinacea Is As Effective As Doing Nothing

While often touted as a common-cold-miracle cure, echinacea appears on almost every cold-cure-myth list I came across. How Stuff Works noted that "Annals of Internal Medicine as well as research funded by the National Center for Complementary and Alternative Medicine (NCCAM) echinacea is no more effective than a placebo." However, placebo effect, believing you are taking a medicine that will make you better, might play a role in helping you recover more quickly.

While there is still no cure for the common cold, there are number of things you can do to make yourself feel better, which will make the experience less miserable. Just be careful not to mistake feel-good remedies for a cure. The best way to treat a cold is to take care of yourself by drinking fluids, getting a lot of sleep, and alleviating your symptoms until the bug works its way out of your system. Take advantage of this gift of time by marathoning your favorite show on Netflix. Seriously, there's no such thing as watching too many episodes of Gilmore Girls.