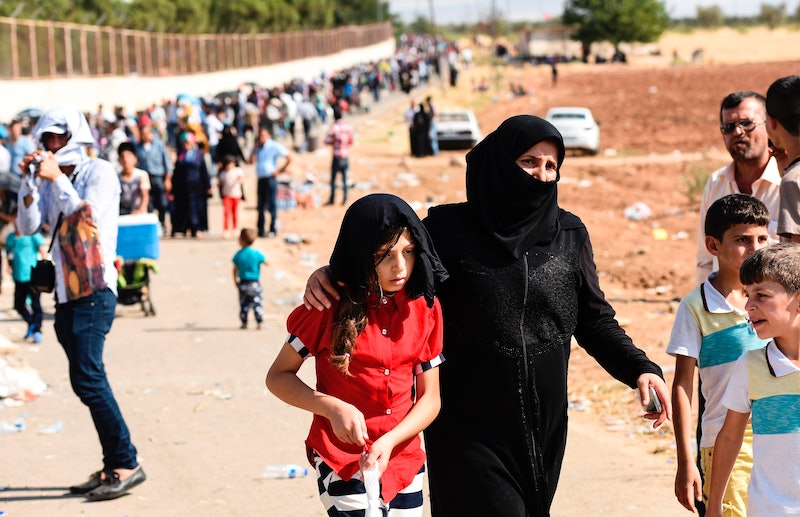 Amid a harrowing time for women's rights in the United States, it's important to constantly remember that it's not just women in the United States who're being needlessly hurt, oppressed, or legislated against. To the contrary, a comprehensive form of feminism demands not only a focus on the conditions of American women, but also on women across the world. So, in that spirit, there are seven ways in particular you can support women in the Middle East.

It's easy to get so laser-focused on what's happening within the United States, that you lose sight of what's going on in other parts of the world. There's nothing inherently wrong with focusing your energies on the struggle for women's rights domestically, to be clear, but it's imperative that women living in often-desperate situations abroad aren't forgotten.

Simply put, the plights of women internationally should be given just as much attention and treated with just as much urgency, because feminism is usually at its best when it centers on and recognizes the people who have the least power in societies. And thanks to the draconian policies of some repressive governments in the Middle East, the unavailability of vital medical services and reproductive rights, and in many cases the impact of U.S. foreign policy, countless women there have needlessly suffered or lost their lives. Here are seven ways to consider working towards positive change.

One of the tried and true methods to help improve conditions when people are suffering, whether it's in your own backyard or abroad, is to make a financial donation to a worthy organization that'll turn that money around to help people.

To highlight a couple of examples, Women for Afghan Women operates many several women's shelters within Afghanistan, and the international health organization Medecins Sans Frontieres (Doctors Without Borders) has played a pivotal role in providing essential health care to women and girls both in and out of conflict zones.

2. Volunteer Abroad In The Middle East

While some regions of the Middle East are positively fraught with danger right now, thanks in part to the devastation and displacement of the Syrian civil war and the ongoing conflict between ISIS and various state-backed forces, many people have nonetheless selflessly volunteered to help provide aid and support.

For instance, you could volunteer to help teach refugees English and maintain a women's center in Lebanon. Or, you could travel to Palestine to volunteer in women and children's development. Or you could get involved with a major human rights-oriented international organization the operates throughout the Middle East ― Amnesty International, for example.

The important thing, however, is to thoroughly research and learn about volunteer programs before you set out to work abroad, to make sure you're prepared for what you're in for, and to ensure your own safety wherever you end up going. If you do so, however, this could be a very rewarding and selfless experience.

One major way you can help reduce the amount of military interventionism and subsequent destabilization in the Middle East, which over the last couple of decades has disrupted, displaced, and cost the lives of countless women throughout the Middle East, is to make foreign policy and militarism non-negotiable voting issues for you.

Obviously, if you're politically progressive, you make feel compelled to ultimately vote for whoever wins the Democratic nomination ― it's effectively a binary choice, after all, so harm reduction may be the name of the game.

Make your voice heard and use your leverage during the primaries before it's too late. Protest, organize, flood the different candidates' offices with calls, and get your friends to do the same. Make it clear that for you, an end to constant military conflict in the Middle East isn't just a want, or a hope, but something you're basing your vote on.

While American military presence is often looked to as a potential solution to abuses and atrocities against women, the track record over the past several years ― like the spawning of ISIS out of the power vacuum of postwar Iraq, for example ― has not been positive.

Nor have America's military actions come without a staggering cost to innocent civilian life, including an ultimately unknown number of innocent women and children. It's been estimated that at least 180,000 Iraqi civilians have been killed since 2003, for example, in addition to more than 30,000 in Afghanistan. And while the Obama administration's publicly acknowledged civilian death toll via American drone strikes was up to 117, many journalistic outlets have stressed that the real number may be far higher. And under the first year of the Trump administration, such strikes have reportedly increased, and even more civilians are dying.

One majorly uncomfortable contradiction when the U.S. government talks about promoting women's rights throughout the Middle East is its ongoing, decades-long alliance with Saudi Arabia. The Saudi state is widely recognized internationally as one of the worst countries for women's rights in the world, barring them from driving, traveling, going to college, and tethering them under a system of male guardianship.

dIn short, to whatever extent the United States wants to promote women's rights around the world, its embrace of Saudi Arabia (largely over oil interests) thoroughly undermines all that.

If you're looking for one of the foremost causes you can support to ease the suffering and support the humanity of women and girls throughout the Middle East, you won't find a much better one than supporting the resettlement of refugees from war-torn Syria.

As it stands, there are estimated to be more than 5 million Syrians who're now refugees living outside their native country, and those people badly need new homes and nations to call their own. It's one of the foremost humanitarian crises of our time, and it's affected women disproportionately ― in fact, three-fourths of them are women and children under 18.

In short, this is something to protest, organize, and engage in activism about. Especially given the Trump administration's controversial and legally questionable ban on refugees and immigrants from six majority Muslim countries ― if you have the time, you should consider calling your senators and representatives and stressing the humanitarian urgency of this issue as often as you can.

If you're looking for a way to help improve conditions and bodily autonomy for Middle Eastern women, supporting institutions and organizations working for their reproductive rights is a fantastic way to help. Especially considering women and dissuaded and ordered against using contraception in some countries. Turkish president Recep Erdogan, for example, insisted that Muslims should not accept birth control just last year.

If you're looking for a good place to direct your donations, the International Women's Health Coalition is a prime example, a highly rated and longstanding charity that specializes in expanding access to sex education, abortion, and birth control around the world, including in the Middle East and Asia.

Any motions you can take to expand your activism from a domestic to global focus are steps in the right direction. The international community won't achieve true gender equality until people around the world stand up for each other — even if they live on opposite sides of the planet.

More like this
5 Ways To Stand In Solidarity With Women In America From The UK
By Sophie McEvoy
How To Fight For Reproductive Rights, Based On How Much Time You Have
By Courtney Young
The Families Of Grenfell Tower Are Still Waiting For Justice, Five Years On
By Bustle UK
Why You're Seeing Green Bandanas At Abortion Rights Protests
By Lexi Inks
Get Even More From Bustle — Sign Up For The Newsletter