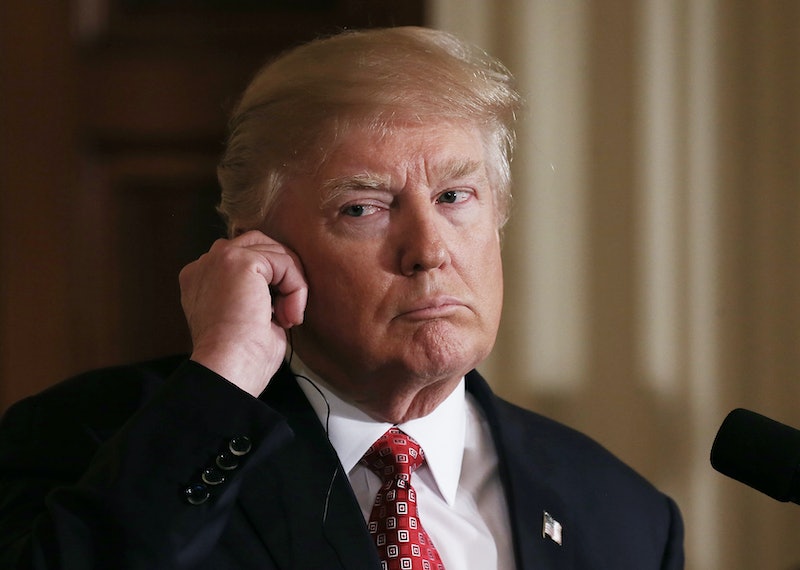 It's no secret that politicians sometimes play fast and loose with the facts. In fact, cynical though it may sound, it's often the name of the game. What can really show the measure of a political supporter, however, is how they confront where their leader of choice has failed them. Whether by breaking promises, or by highlighting their supporters' own double standards, politicians can sometimes force people to confront their own hypocrisies. And on that front, many Trump supporters are coming up short. And there are several ways Trump voters have proven their hypocrisy, both big and small.

To be clear, not every Trump supporter falls under this umbrella. Whatever you might think of the choice they made, everyone has their own reasoning for why they cast a vote, and not everyone who checked the box by his name on Election Day did so for the deliberately nefarious reasons that some Trump critics might suspect. And some of them have already changed their minds ― you need look no further than the @Trump_Regrets Twitter account for proof of that.

But there are also some of his most vehement supporters who made a lot of arguments during the campaign season that look awfully strange now. And ultimately, a willingness to honestly examine one's past decisions is crucial to a well-functioning and informed electorate. Here are seven areas where some of Trump's loyalists are coming up short on that self-reflection.

Between the selections of GOP megadonor Betsy DeVos as education secretary, Dr. Ben Carson as secretary of Housing and Urban Development, and Scott Pruitt to lead the Environmental Protection Agency, Trump has made it clear that getting qualified people who care about and understand the core missions of their departments is not a priority.

DeVos' confirmation hearing made it clear she lacks some very fundamental, rudimentary knowledge about the public school system she's now charged with running. Carson has no experience whatsoever in housing policy, and there still hasn't been a coherent explanation for why he got the job. Pruitt was actively suing the EPA at the time he got the job.

In short, despite Trump's claims to the contrary, he is not bringing in "the best and most serious people."

In the run-up to the election, some noxious alt-right social media figures and even Trump campaign surrogates stoked conspiracy theories about Hillary Clinton's health, which picked up even more steam after the Democratic nominee fell ill with a case of pneumonia late in the campaign ― Rudy Giuliani, for one, was particularly blunt about this rumor-mongering. Trump, for his part, routinely suggested that Clinton didn't have the "stamina" to be president.

Well, who's light on stamina now? According to The New York Times' report on Trump's antagonistic conversation with Australian prime minister Malcolm Turnbull, a staunch U.S. ally, Trump allegedly hung up just 30 minutes into what was meant to be an hour-long call. It's unclear why the call was allegedly cut short, but it doesn't bode well.

3. Being Chill With Goldman Sachs Again

Remember back when Trump was regularly taunting and attacking his GOP rival Ted Cruz, as well as Clinton, for their coziness with Goldman Sachs? Well, he's now got an ex-Goldman banker as his chief strategist, and a former Goldman investment banker taking over as Treasury secretary. Not exactly what that apocalyptic anti-international bankers campaign ad released right before Election Day suggested, huh?

Maybe you don't remember it, but it was widely portrayed as the Trump campaign's "closing argument." But if there's one thing that closing argument didn't say, it's "hey, let's stock the cabinet with Goldman Sachs bankers." To the contrary, it basically argued the opposite, but it seems Trump didn't take the message very seriously.

4. Careless Use Of Unsecured, Private Devices

People sure spent a lot of time fixating on Clinton's email server and handling of classified materials. It all seems so quaint nowadays, as the countless "but her emails!" memes all over social media attest.

And yet, it's becoming increasingly clear that the Trump White House doesn't necessarily handle security risks with the dose of caution it should. According to a report in The New York Times last month, Trump is still using an unsecured Android phone as president. This led Democratic senators Tom Carper and Claire McCaskill to call for further details from the White House about his cell phone usage, citing the considerable risks to national security that would be raised by the president regularly using an unsecured phone. The White House has so far not responded to their demand.

5. Forgiving & Forgetting All That "Lock Her Up" Stuff

It's ultimately for the best that there hasn't been a massive, forceful outcry on the part of Trump supporters for breaking his pledge to investigate and ultimately imprison Clinton. But a broken promise it was ― he even claimed she'd be in prison if he were president during one of the three presidential debates. It was not a subtle claim, even if many political observers saw it for the political play it was.

6. All Of The Sexual Assault Allegations

It's a simple matter of record that both Trump and Bill Clinton have been accused of sexually predatory behavior by multiple women, with the accusations against each spanning more than one decade. Both men have denied such behaviors, with Trump going so far as to publicly call his more than a dozen accusers "horrible liars," saying "the events never happened." And when Trump invited Bill Clinton accusers to a press conference in October 2016, the Clinton campaign called the move a "stunt."

In a statement to Bustle following the event, Hillary Clinton For America communications director Jennifer Palmieri said, "We’re not surprised to see Donald Trump continue his destructive race to the bottom."

In short, this gave rise to some of the most tortured logic on the part of ardent pro-Trump voices throughout the campaign. Namely, this logic involved attacking Clinton over allegations against Bill, while ducking tough questions about the accusations against Trump. Decrying and condemning one set of allegations while denying or ignoring the others, regardless of which party you belong to or which candidate you support, is a hypocritical weaponizing of sexual assault allegations that's far beneath the seriousness the issue demands.

The biggest premise behind those endless "lock her up" chants was that Clinton had recklessly compromised national security, and moreover, that she had allegedly lied about it. Clinton denied lying about it, but apologized for her use of a private email server. And ultimately, she was cleared of any illegal wrongdoing by the FBI. And just weeks after Trump's swearing-in, the chickens came home to roost for one of the Trump administration officials who personally led that chant at the Republican National Convention: General Mike Flynn turned in his resignation as national security adviser on Monday, Feb. 13.

The move was preceded by reports that Flynn allegedly discussed former president Barack Obama's late-term sanctions against Russia with the Russian ambassador to the United States before Trump took office. Flynn denied any serious wrongdoing, telling Politico that if he had crossed any lines, "the FBI would be down my throat." Russia also denied that sanctions were discussed at that time. Flynn allegedly misled Vice President Mike Pence regarding the content of the conversations as well. Any Trump diehard who was outraged at Clinton's behavior should be willing to admit that Flynn made his own missteps.

In short, the early weeks of the Trump era are putting anyone who crusaded against the allegedly controversy-saddled Clinton campaign in a pretty awkward position. The only question is how many people who voted for him truly do grow to regret that choice, and realize to what extent his salesmanship may have obscured his abilities and intentions.