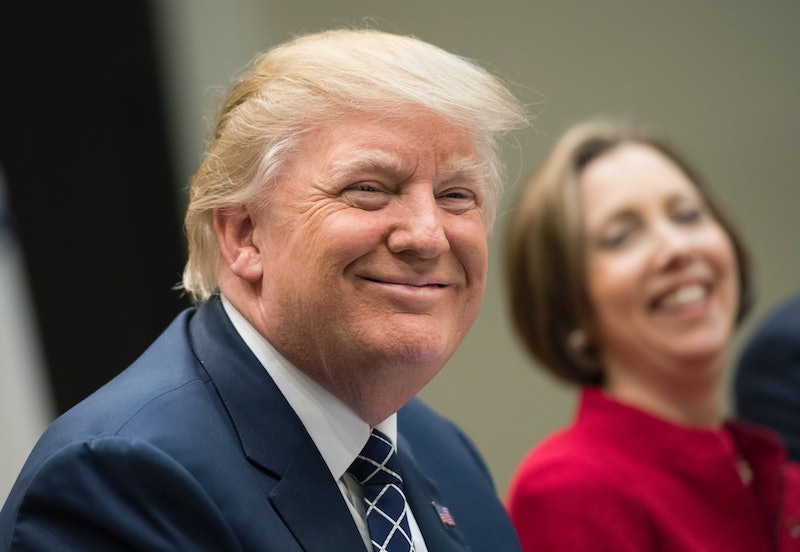 The Republican Party has unveiled its long-awaited Obamacare replacement plan and, so far, it's being trashed by people on both sides of the aisle. Democrats hate that it ends several of the central components of Obamacare, including its premium tax credits and Medicaid expansion. Republicans hate it because it only repeals parts of Obamacare, not the whole thing. And a lot of women hate it because they will be disproportionately affected by its consequences. There are many ways in which Trump's Obamacare replacement wants to punish women simply for being women.

That said, it's not a given that this plan will pass and become law; surprisingly, this is mainly due to opposition from within the GOP. Conservative House Republicans are slamming the bill as "Obamacare Lite" (which isn't an entirely inaccurate characterization), and demanding a full repeal of the law. Meanwhile, four Senate Republicans oppose the bill's rollback of the Medicaid expansion — and four votes in the Senate is more than enough to sink any repeal effort. But removing that part of the bill would almost certainly make it unpalatable to conservative House Republicans.

There are still plenty of negotiations to take place, and the bill will undoubtedly change as it moves its way through Congress. One thing's for sure, though: The bill that House Republicans and President Trump have endorsed takes aim at American women in many ways — here are seven of them.

The Affordable Care Act includes the "essential health benefits requirement," which requires insurance plans to cover a host of basic services — including maternity care. Trumpcare scraps this requirement in 2020, meaning insurers would no longer have to provide prenatal and maternity care in their plans.

One of the biggest ways Trumpcare would hurt American women is by defunding Planned Parenthood, which serves 2.5 million Americans every year. Currently, the federal government gives around $500 million in funding to the organization each year in the form of Medicaid reimbursements, but Trumpcare would make this illegal. Choking off this source of funding would almost certainly cause some of its clinics to close, which would severely limit many low-income women's access to the preventative care that Planned Parenthood provides.

Abortions only constitute 3 percent of the services Planned Parenthood provides. The flip side, though, is that almost half of all abortions in the United States are performed by Planned Parenthood, according to 2013 data from the CDC and the organization itself. By defunding the organization, Trumpcare would drastically reduce abortion access for hundreds of thousands of women across the country.

Here's one that's flown under the radar: Under Trump's proposal, married people won't be eligible for tax credits (which make premiums more affordable) unless they file a joint tax return with their spouse. As the National Women's Law Center points out, this means that women in abusive relationships won't be able to receive financial assistance unless they file joint returns with their abusers — which, of course, would require them to reveal sensitive personal and financial information to said abusers.

Trumpcare would cut off low-income women's access to contraception in two distinct ways: First, by defunding Planned Parenthood (80 percent of the organization's services are aimed at preventing unwanted pregnancies); second, by eliminating the aforementioned essential health benefits requirement, which requires insurers to offer birth control with no co-pay.

Trumpcare doesn't merely reduce abortion access by defunding Planned Parenthood, which primarily serves Medicaid recipients. The GOP plan also prohibits Americans from using tax credits to purchase health plans that cover abortion. This makes such health plans less affordable, and thus less attractive to consumers; that, in turn, will result in fewer and fewer health care plans on the private market offering abortion coverage at all. Eventually, this could conceivably result in the end of all abortion coverage through health insurance, private or public.

In the most general sense, the GOP health care plan will imperil low-income women by gradually ending Obamacare's Medicaid expansion. This will directly hurt low-income Americans by cutting off their only available health care options. Because poverty rates are higher for women than men, this is yet another portion of the law that will disproportionately hurt women.

Make no mistake: Rolling back Obamacare, especially in the way the Republicans have proposed, is a direct attack on American women.