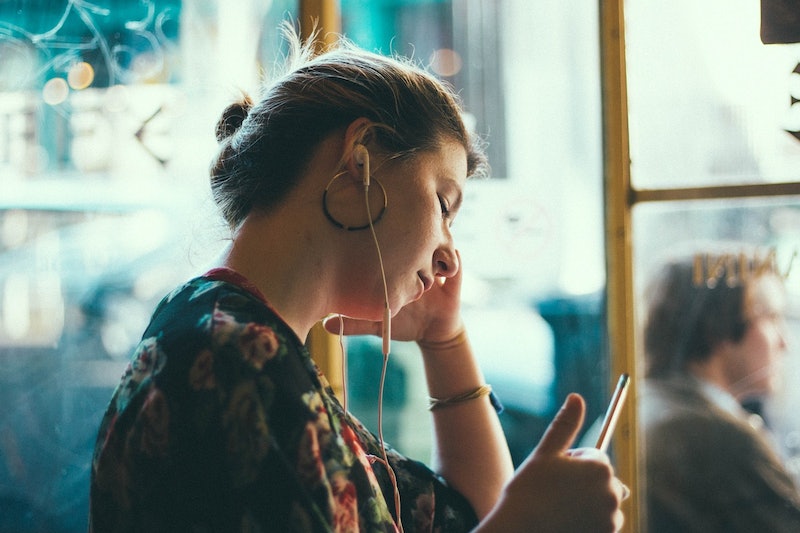 If you need a lot of alone time, the holidays can be especially exhausting. While part of this is due to constant socializing with family and friends, another source of stress might be from something you haven't considered. Your phone. Ways your phone is making your holiday stress even worse include depriving you of pure, technology free solitude, something most people haven't experienced since the advent of the smartphone. I'll be the first to admit that leaving the house without my phone makes me feel instantly anxious. What if I need directions? What if I miss and important text? What if I need help and need to call someone.

But, as an older millennial, I left my house without a cellphone for half of my life, and the fact that I am sitting here writing this is proof that I survived with no ill effects. And, four new studies published in Personality and Social Psychology Bulletin found ditching your phone is actually really good for you. In the studies, people who experienced just 15 minutes of alone time without their phones felt emotions less intensely, according to psychology today.

"People felt less excited, energized, anxious, and angry after sitting alone with no devices than they had before. They also felt calmer, more relaxed, and more peaceful," Bella DePaulo Ph.D. reported for Psychology Today. If you're feeling totally overwhelmed heading in the holidays 2017, taking some time for yourself without your digital BFF could be what you need to recharge your batteries. Not convinced that techno stress is real? Here are some ways your phone could me making you feel more stressed than is necessary.

A 2016 report from the American Psychological Association (APA) noted that people who constantly check their phones are more worried about how their behavior affects their wellbeing. However, worrying about being worried did not make these people curb their behavior. The APA dubbed 43 percent of Americans "constant checkers," and noted that "More than two in five constant checkers (42 percent) say that political and cultural discussions on social media cause them stress," though that did not make them check their social media accounts less often, the study highlighted.

Additionally, millennials reported the highest levels of technology-related stress and worry than any other generation. "The more people use their phone," Dr. Nancy Cheever, who conducted research on the relationship between anxiety and cellphone use at California State University, told ABC News, "the more anxious they are about using their phone."

ABC News reported that this research suggests that, "phone-induced anxiety operates on a positive feedback loop, saying that phones keep us in a persistent state of anxiety and the only relief from this anxiety is to look at our phones."

2. It Disconnects You From Family & Friends

Constantly engaging with your phone while in the physical presence of family and friends disconnects you from the people around you, the APA study noted. Pre-smartphone, people who chose to spend time together engaged with one another more versus our current cultural that has people in the same room ignoring one another in favor of checking in on their virtual pals.

3. It Makes You A Bad Listener

You've probably experienced being in an in-person conversation with someone who is not really listening to you because they're distracted by their phone. And, most of have also engaged in this behavior. Heading into the holidays you'll likely be seeing people you haven't had a chance to spend time with all year. If you're not fully present because of your phone you could be missing out on some great IRL interactions.

An article published on Psychology Today outlines an experiment Cheever conducted on CNN Reporter Anderson Cooper. She hooked him up to two machines, one that monitored heart rate and another that monitored electrodermal activity. She then took away his phone and called and texted him to measure his response — a large spike in anxiety each time he was not allowed to check his device. He also admitted that worry about what he was missing on his phone caused him to pay less attention while interviewing people.

"Earlier in the day when he was interviewing me, he admitted that he was not paying close attention to my answers because he had silenced his phone and put it on the floor at the foot of his chair and he was anxious about missing out on his texts and other messages," Larry D. Rosen Ph.D. wrote on Psychology Today.

Rosen also reported that when two people have an in-person conversation in the presence of a cellphone they are less likely to trust each other by the time the conversation is over. Even if neither party is checking their phone, simply having it in the same room can erode the relationship. "In one study researchers placed either one of the two participants’ phones close by as they communicated," he wrote on Psychology Today. "Following a 10-minute discussion between the two people, each person felt less close and less trusting of the other."

One way to potentially remove this pitfall from your upcoming holiday celebrations is to impose a no cellphone rule. This way everyone at your holiday gathering is actively engaged with one another versus worrying about their devices. If you do this it's important to make sure you let your guests know ahead of time so they don't freak out when they arrive and have to separate from their phones.

Digital communication causes a huge uptake in misunderstandings because you can't see the other person's face or hear their vocal cues. You also can't see what else they're doing, which can lead you ascribe intent that isn't really there when they don't text you back ASAP. Sometime people are driving or working and can't get back to you right away, and nine times out of 10 it has nothing to do with you.

"There’s a lot of other subtext (no pun intended), like how quickly do they respond, ‘I texted you right away and you didn’t text back, what does that mean?'" says Dr. Susan Weinschenk told Cosmopolitan. "When people text, to them, it’s very immediate, and if there isn’t an immediate response, you kind of feel like you’re being ignored." And, feeling ignored can make you do passive aggressive things like purposely ignore the person as a punishment when they finally do text you back.

6. You Could Develop Nomophobia

Nomophobia, fear of being without your phone or being dependent on your phone to complete tasks, is becoming so prevalent that a proposal was drafted to include it in the diagnostic and statistical manual of mental disorders, according to a 2015 study. The Guardian reported that another study found that people with high levels of nonophobia expressed physical symptoms like neck pain, and emotional symptoms like feeling lonely.

If you spend the 2017 holiday worried about your phone, you could be unintentionally making yourself less available to those around you, and you could also experience physical and mental feelings of stress and anxiety.

7. You're Not Dealing With Your Feelings

If thoughts of upcoming 2017 holiday gatherings are inducing feelings of stress, avoiding these feelings by distracting yourself with your phone could make you feel even more stressed, an article published in the Harvard Business Review, noted. "In my personal experience, mindlessly relying on my phone and computer has been a useful, albeit insidious, way of avoiding uncomfortable feelings," HBR staff writer Charlotte Lieberman explained. "After all, how many of us regularly accept and embrace those moments when we feel weird or bored or lonely?" while confronting your feelings can be scary, by avoiding your feelings, you may end up feeling more anxious and tired than if you dealt with them directly.

So, what's the solution? No one is suggesting that you get rid of your phone because that's just crazy talk. However, spending just 15 minutes alone every day without your phone can help you to feel less stressed. Whether it's reading a book or taking a phone-free walk, just being alone with yourself can help you hit the reset button, and increase your chances of a low-stress 2017 holiday. While it might feel weird at first, eventually you'll look forward to your daily digital detox, and you'll likely feel a whole lot less stressed.