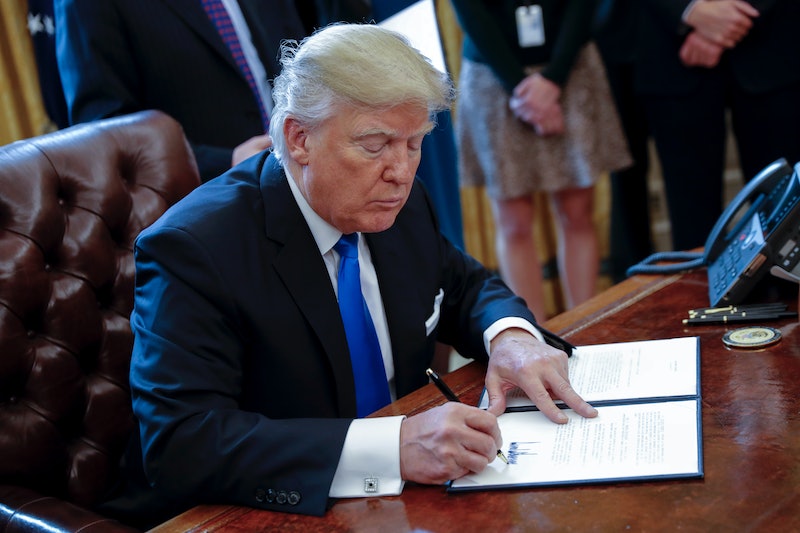 President Donald Trump has been busy since entering the Oval Office. In his first few days, Trump has enacted executive orders to unwind some of President Obama's legacy, including a memorandum to "ease the burden" of the Affordable Care Act (experts aren't completely sure yet what that means), a gag order on foreign aid groups which denies funding to any that even present abortion as an option to patients, and a reinstatement of plans to build the Dakota Access and Keystone XL pipelines. Trump is taking advantage of the power of the executive to make things happen quickly, not having to go through the slow process of building law in Congress. This was something that President Obama took great advantage of, especially when facing Republican control of Congress.

There are limits, though, to what Trump can and cannot do by using the power of the executive. It's still to be seen what he will do, but here are eight possible orders that his administration could enact in the coming days:

(Note, for the sake of simplicity, I'm not going to differentiate here between executive orders, actions, memoranda, proclamations, and other uses of executive authority, which are legally different but not really the point of this piece.)

Some of Trump's most heated rhetoric during the campaign centered on his opposition to immigration, especially those living within the United States illegally. In 2012, Obama enacted an executive order called Deferred Action for Childhood Arrivals (DACA), which those who were brought to the United States illegally as children to register with the government, removing them from fear of deportation and allowing them to obtain work permits. During the campaign, Trump was generally quite harsh on DACA recipients, but since the election, he has said he wants to find a humane solution for those protected, and his administration has so far continued the program apace.

One issue that's been fought via executive orders over the past few administrations is medical research using stem cells from human embryos. In 2001, President Bush ordered that no federal funding could go to stem cell research, citing his Christian faith. In 2009, President Obama reversed the ban, citing the potential medical benefits. Trump hasn't talked much about the issue (along with much of the political world), but if he wants to earn some support from pro-life voters, this may be a way to do it.

3. Preserve Or Expand Use Of Guantanamo Bay Prison

One of President Obama's very first executive orders was to close down the military prison at Guantanamo Bay, which has existed outside the American legal system and been accused of human rights abuses by numerous international observers. Obama's use of an order hit a snag when Congress stopped him from relocating its prisoners into the United States, but his administration has managed to remove a significant portion of its prisoners from its walls. President Trump said during the campaign that he wants to keep using the prison, and he could use executive orders more expansively than Obama did, keeping the prison open and even sending more foreign prisoners there.

Trump spoke frequently on the campaign trail against taking in refugees fleeing the Syrian Civil War and other international conflicts. Since refugee resettlement is under the purview of the State Department, Trump could stop the United States from accepting refugees, or seriously lower the acceptance rate down from the nearly 85,000 resettled in 2016.

One of the most controversial statements Trump made during the election was his call for a ban on Muslims entering the United States, which morphed into a call for "extreme vetting" of immigrants from Muslim countries. During confirmation hearings, Trump's nominees for secretary of State, attorney general, and secretary of Homeland Security all voiced opposition to Trump's plan to ban Muslims. But Trump can nevertheless enact some form of immigration limits from Muslim countries through executive action.

The Obama administration extended Title IX protections against discrimination based on sex to include transgender individuals, ensuring that U.S. colleges and universities have to treat transgender students according to their gender identities and allow them to use the corresponding bathrooms. The Obama administration also banned federal contractors from discriminating based on sex as well. Though Trump has been more conciliatory on transgender issues than many Republicans, these protections could still end.

7. Pull The United States Out Of The Paris Climate Accords

During the campaign, Trump called for withdrawal from the Paris Climate Accords, the global agreement among nations of the world to scale back carbon emissions. Trump, through his authority to handle international policy, could start the process pulling the United States out of the agreement. Even if he does not, he could easily slow or stop efforts by the U.S. government to meet its goals in limiting emissions.

Trump has repeatedly expressed his desire to enact tariffs in order to keep American jobs from shipping overseas. It's unlikely he could get this policy through Congress, since many Republicans and Democrats are against it. However, many economists and business leaders are concerned about the effects it could have to cripple the American economy by raising prices for consumers and businesses. But Trump could likely enact many of his proposed taxes on foreign goods through laws that allow the president to negotiate trade, and enact tariffs in times of war.

More like this
Prince William Condemns “Unacceptable” Comments Made To A Black Guest At Buckingham Palace
By Shahed Ezaydi
The David Beckham Qatar Controversy, Explained
By Sophie McEvoy
The 5 Best Chair Glides For Hardwood Floors
By Vanessa Spilios
These Restaurant-Quality Wine Sets Are Perfect For All Those Impossible-To-Shop-For People
By Jen Fiegel
Get Even More From Bustle — Sign Up For The Newsletter