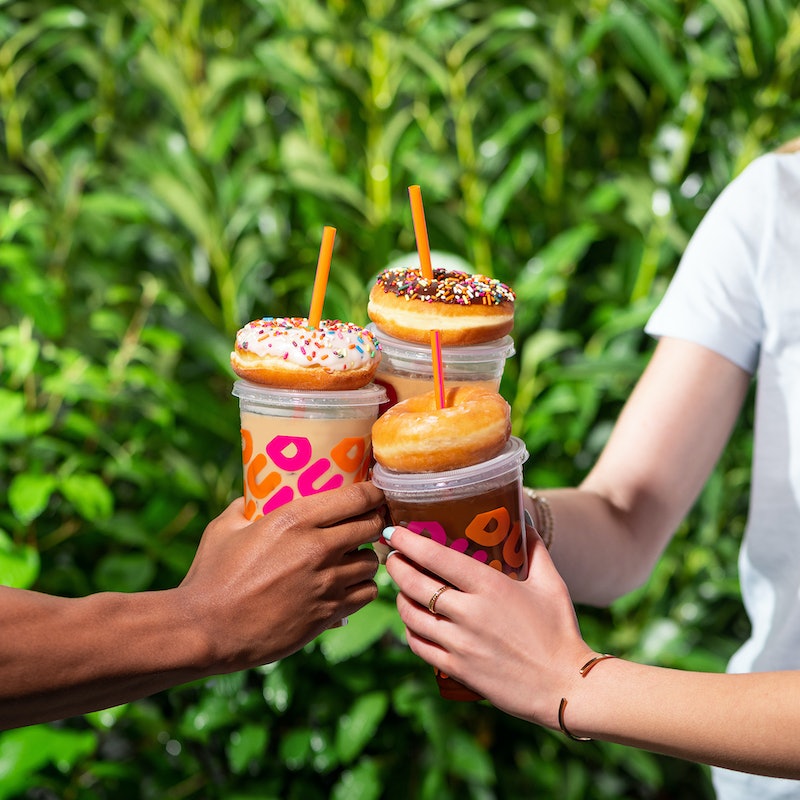 Donuts are a very versatile treat. They even have two different spelling iterations: donut and doughnut. They come in the classic round rings and the bite-size donut hole. They can be a cake donut or a yeast donut. They can be powdered or they can be glazed or they can be frosted. There is, basically, a donut for everybody. And on June 7, some of them will even be free.

This isn't just another unofficial food holiday created for Instagram. National Donut Day has historical ties. According to the National Day Calendar, "In 1917, the original 'Salvation Army Doughnut' was first served by the ladies of the Salvation Army. It was during WWI that the Salvation Army Lassies went to the front lines of Europe. Home cooked foods, provided by these brave volunteers, were a morale boost to the troops." Now on the first Friday of every June, we honor the joy that donuts bring and the women who brought them — here are a few chains getting in on the celebrations this year.

Roll up to a Krispy Kreme location on National Donut Day and receive a free donut. No purchase necessary. The limit is one donut per customer. This year Krispy Kreme wants customers to help them give away one million donuts at participating locations. And when that goal is reached, customers can expect a second free donut giveaway later in the month. Let us help Krispy Kreme and therefore, help ourselves!

Per a Walmart spokesperson, Walmart as 1.2 million glazed donuts to giveaway on June 7 — just stop in to one of the 4,000 participating locations and get one free glazed donut.

Early birds get the free donut at Cumberland Farms. Between 5 a.m. and 10 a.m., customers will receive a free donut with a dispensed beverage purchase. This includes iced and hot coffee. The deal is limited to the remodeled and new concept locations.

Would it even be a National Donut Day without a stop at Dunkin' Donuts? I think not. Customers will be treated to a free classic donut with the purchase of a beverage.

On National Donut Day, customers of Duck Donuts will be treated to a free bare, cinnamon-sugar, or powdered sugar donut in store. No purchase is necessary to dig into this pastry.

If you're a Kwik Rewards member, you'll have access to a coupon redeemable on Jun. 7. This golden ticket will afford you a free cake donut, Dunker or Glazer.

LaMar's Donuts is teaming up with the Salvation Army to help end child hunger. According to LaMar's, "During the summer months ahead, The Salvation Army will open its doors to children across the nation providing millions of meals to ensure that no kid goes to bed hungry." You can make a donation through LaMar's website. And then, on Jun. 7, you can receive a free donut at your local LaMar's with no purchase necessary.