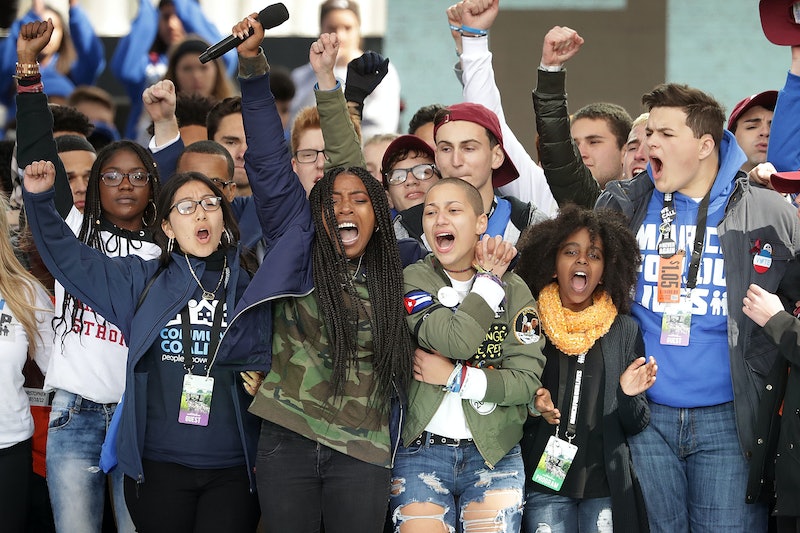 Washington, D.C. could soon become allow 16- and 17-year-olds to vote in federal elections. A new age requirement bill was introduced last week by a Democratic councilman and has already garnered significant support, sparking a national conversation about the pros and cons of lowering the voting age to 16.

The United States isn't the only country that's been having this debate recently. The United Kingdom has considered lowering its voting age — Scotland actually did so — as has New Zealand. Teens aged 16 can already vote in nations like Brazil, Austria, Cuba, Argentina, and Ecuador. Some places in the United States have also already lowered the voting age for local elections, including Takoma Park, a city in Maryland.

The age requirement question has taken on particular poignance in the wake of February's school shooting in Parkland, Florida. Survivors of that massacre astonished the world by rapidly springing into action and changing the nature of the debate over gun control in the United States. With so many minors proving themselves capable of being articulate and politically savvy, many onlookers have been wondering whether they should also be given the right to vote.

Here are some of the most important pros and cons being raised in this debate.

Voting is a habit, and those who start young are more likely to continue later in life. Some people argue that it's easier for young people to pick up the habit when they're in a relatively stable place in their lives — like when they're still living with their parents and going to high school, as opposed to when they're moving out, starting their first jobs, or attending college.

The example from Takoma Park suggests that minors are actually more likely to take advantage of the chance to vote than adults. Lowering the voting age could boost voter turnout.

Research by Jens Olav Dahlgaard, an assistant professor in political science at the Copenhagen Business School, shows that parents vote more frequently when they're trying to set an example for their children who have just reached voting age — if their kids are still living with them.

Because many people move away from their parents when they turn 18, lowering the voting age would increase the amount of time that parents and kids spend living together while they're able to vote, and could incentivize both to hit the voting booths more frequently.

Research published in Political Studies in 2006 asserted that 16- and 17-year-olds are generally less mature than their older peers. The Conversation reported that some people worry immature youths could be easily influenced, or even coerced, into voting a certain way by adults.

PRO: ... But The Essential Part Of The Brain Is Mature

A recent New York Times op-ed by adolescent psychology expert Laurence Steinberg advocated for the importance of distinguishing between "hot" and "cold" cognition in youths. Teenagers do lack elements of "hot" cognition, including impulse control and emotional regulation — basically, it's harder for them to make rational decisions under pressure.

But by the age of 16, teens have maturely developed "cold" cognition. That means that they can make rational decisions when they are calmer and have the time to process information, which Steinberg argues are the circumstances most people find themselves in when voting. By age 16, he writes, "adolescents can gather and process information, weigh pros and cons, reason logically with facts and take time before making a decision."

Forbidding 16-year-olds from voting is consistent with many other laws that govern their behavior until they turn 18. As the Law Dictionary laid out, teens at age 16 aren't allowed to work full time, apply for a credit card, participate in jury duty, or be held accountable for their own debts.

PRO: ... But They Have Many Other Responsibilities

According to the Fair Labor Standards Act, teenagers can hold jobs as early as 14 and legally must pay taxes as soon as they start earning independent income.

CON: Kids Can Be Politically Engaged Without Voting

Young people can still make their voices heard without voting, as the recent Parkland activism demonstrates. Many kids in school are involved in political clubs and are civically engaged through volunteering.

Sometimes minors who commit crimes are given more lenient sentences and greater confidentiality, a report from the Office of Legislative Research indicated. But according to the National Conference of State Legislatures, every single state also allows serious offenses to be "transferred" so that minors are prosecuted like adults.

This happens most to youths of color; a 2016 study in New Jersey by the WNYC Data News Team showed that nearly 90 percent of requests to "transfer" a minor into the adult system were for black or Hispanic kids. If a youth can be held responsible for following laws as much as adults, surely they should have a role in helping to choose the legislators who make those laws.

If D.C. decides to pass the new voting age minimum, 16-year-olds could vote in the upcoming 2020 presidential election.