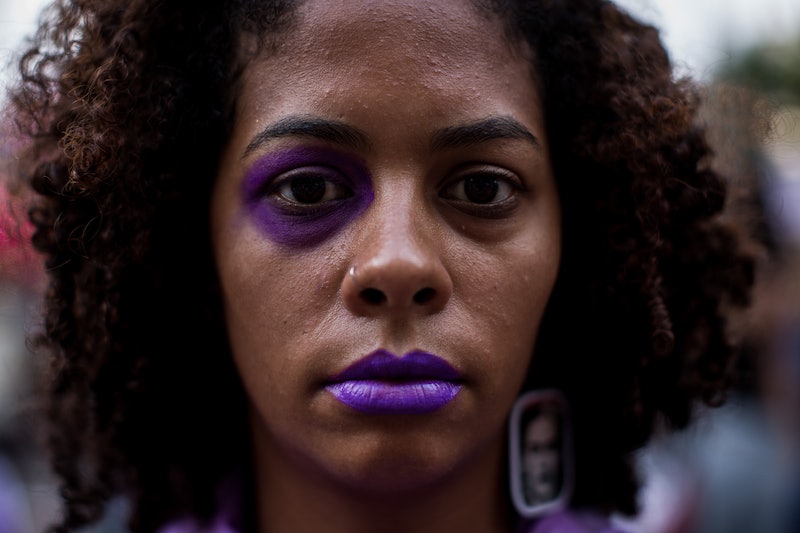 It comes as no surprise that over the years male politicians have uttered some truly cringeworthy things about women while on the job. And while one might have hoped that modern times would have brought more feminist-minded men into office, the election of Donald Trump seems to prove we're not quite out of the woods just yet.

But while the sexist rhetoric of Trump's 2016 presidential campaign may serve as one of the most glaring examples of a politician spewing antiquated ideas, he isn't the only male politician to have disregarded women's rights. Although we're not even halfway into 2017, we've already seen more than a few male politicians utter some fairly offensive things about women's rights.

Whether they're talking about abortion, rape, equal pay, or women's bodies, some lawmakers really know how to offend their female constituents. While there are a good many men fighting to close the gender pay gay, advance gender equality, and protect reproductive rights, some male politicians have unfortunately shown themselves to be far less supportive of women's rights.

From arguing against equal pay for women to justifying attempts to roll back reproductive rights, here are 8 backwards things male politicians have said about women's rights in 2017 alone:

1. A Right To Get Slapped

In January, far too many male politicians proved they're uncomfortable with the idea of equality. Among them was J. R. Doporto, a city councilor from Carlsbad, New Mexico who responded to the Women's March on Washington with a Facebook post warning women they had "a right to get slapped":

Just want to give a heads up to the women! You have rights! A right to cook and a right to clean. Today is Sunday and the NFL playoffs our on! I suggest you stop your b!tch!ng/protesting during this time. Because you also have a right to get slapped!

During a town hall meeting in May, Iowa Rep. Rod Blum repeated an argument commonly heard uttered by Republican politicians – that men shouldn't have to pay for women's health care services. Like many other politicians who've used this argument, Blum appeared blissfully oblivious to the fact à la carte insurance policies have already been shown to not work for a variety of different reasons.

Get rid of some of these crazy regulations that Obamacare puts in ... such as a 62-year-old male having to have pregnancy insurance.

What better way to dismiss efforts to close the gender pay gap than by dismissing women altogether? In February, Polish politician and European Parliament member Janusz Korwin-Mikke not only suggested women were less capable than men in sports and games of strategy, but claimed they were undeserving of an equal wage because they are weaker and less intelligent altogether.

4. You May Feel Like It's Your Body, But Really You're Just A Host

In February, the Oklahoma state legislature debated a bill that would have required women to obtain written permission from the man they had had sex with before they were legally able to have an abortion. In an interview with Intercept, Oklahoma State Rep. Justin Humphrey, the bill's author, defended the policy by arguing women were wrong to believe their bodies were their own.

I understand that they feel like that is their body. I feel like it is a separate — what I call them is, is you're a "host." And you know when you enter into a relationship you're going to be that host and so, you know, if you pre-know that then take all precautions and don't get pregnant. So that's where I'm at. I'm like, hey, your body is your body and be responsible with it. But after you're irresponsible then don't claim, well, I can just go and do this with another body, when you’re the host and you invited that in.

5. But Who Will Cook Dinner?

The Women's March on Washington may have inspired some of the most sexist commentary on women's rights this year. While people of all genders took to the streets in cities across the country as a means of showing their commitment and support for the rights of women and other marginalized groups they felt may come under threat during Trump's presidency, one local politician in New Jersey appeared capable of only focusing on his hunger pains.

John Carman, a freeholder, or part-time county-level elected official, in Atlantic County, New Jersey, took to Twitter with a meme wondering whether female protesters would make it home in time to cook dinner.

Will the women's protest be over in time for them to cook dinner?

In February, Vice Chair of the Utah Republican Party James Green argued against equal pay for women in a letter to the editor published by local papers the Park Record and the Wasatch Wave. Green was forced to resign after his antiquated ideas on equal pay became public.

If businesses are forced to pay women the same as male earnings, that means they will have to reduce the pay for the men they employ, simple economics.

If that happens, then men will have an even more difficult time earning enough to support their families, which will mean more Mothers will be forced to leave the home (where they may prefer to be) to join the workforce to make up the difference.

And as even more women thus enter the workforce that creates more competition for jobs (even men's jobs) and puts further downward pressure on the pay for all jobs, meaning more and more Mothers will be forced into the workforce. And that is bad for families and thus for all of society.

7. Have A Tattoo, Piercing, Or Plane Ticket? Then Buy Your Own Birth Control

While bemoaning the appearances of women participating in the Women's March on Washington in a Facebook post, Mississippi State Sen. Chris McDaniel wondered why they want free birth control when they can afford body modifications like tattoos and piercings. But for many women birth control isn't a luxury purchase, it's an vital preventive health care service.

I do have a question: if they can afford all those piercings, tattoos, body paintings, signs, and plane tickets, then why do they want us to pay for their birth control?

8. Smile For Us Today

Earlier this month, Texas State Rep. Jonathan Stickland interrupted a session of the Texas House to ask a female assistant parliamentarian to smile.

Can we get the parliamentarian to smile for us today?

To those who argue that a man telling a woman to smile is hardly a comment on women's rights, I say this: A man who thinks he has the right to tell a woman to change something about her appearance simply because it would please him does not understand the basic principles of gender equality.

More like this
How To Fight For Reproductive Rights, Based On How Much Time You Have
By Courtney Young
10 Times Boris Johnson Got It Wrong On Trans Rights
By El Hunt and Sam Ramsden
Harry Styles Called For "Backlash" In Powerful Statement On Abortion Rights
By El Hunt
LGBT+ Men Fleeing Afghanistan Were Denied Asylum By The Home Office, New Findings Show
By Sam Ramsden
Get Even More From Bustle — Sign Up For The Newsletter