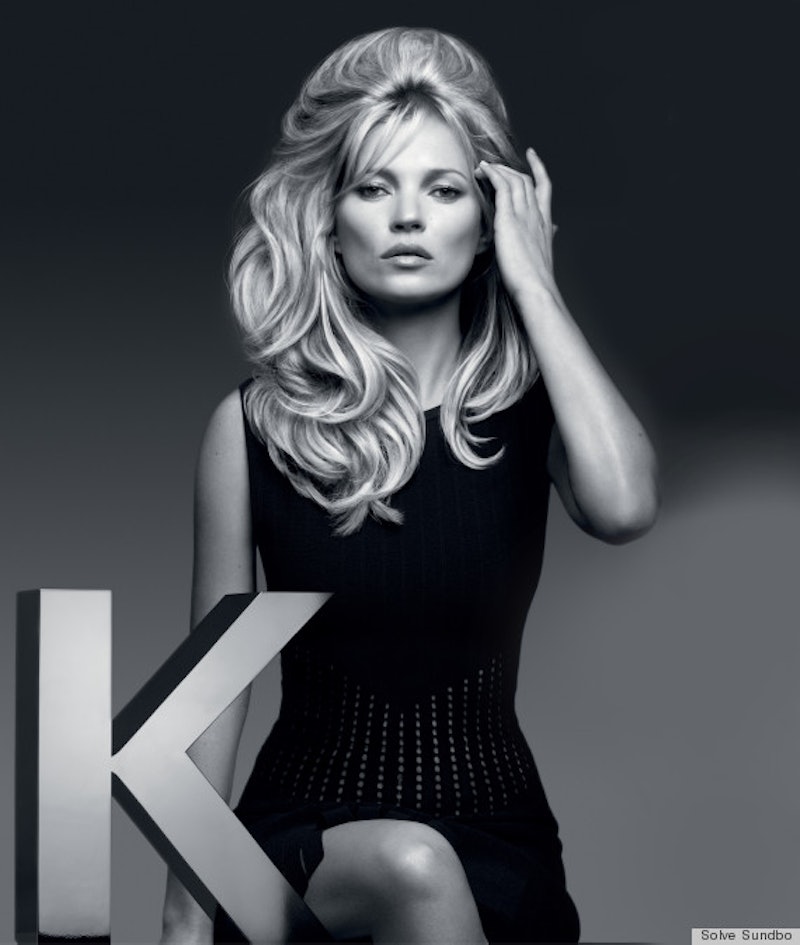 Kate Moss has been modeling for, well, literally decades. So it's no surprise that in her 20 plus years of being a world famous (maybe the most world famous) supermodel, she's done photo shoots that have made her look like she would fit perfectly into just about any other decade you could think of (this includes the future — because it's Kate Moss, and she looks good no matter what weird thing she's wearing). Moss has been called a timeless beauty, and whether that's because she is the most famous supermodel of our time or the fact that she simply does not age (no, really, it's scary). Who knows? But one thing is for sure — Moss looks good in every single decade, no matter what.

In her most recent campaign with Kérastase Paris, Moss channeled the one and only Brigitte Bardot and looked (dare I say it?) almost better than Bardot herself. Only Kate Moss is capable of something that amazing. From '40s glam to '70s mod to even Renaissance romance, Moss has proved that she would easily be considered the hottest thing on the planet no matter what time period she had been born in. Check out some of her best out-of-this-decade looks from recent photo shoots below. The award for most impressive, versatile 40-year-old supermodel goes to...

Brigitte, is that you? One of Moss' most recent campaigns, the Kérastase photos look like something straight out of the '60s.

This looks like it could be right out of a scene from Titanic, but it also has Grecian vibes as well. The Oscar de la Renta gown is timeless in itself, and combined with Moss' look, it's easy to place this photo in almost any decade.

Oh, hello, late '60s, early '70s Kate Moss. The topless thing just works here. If you weren't already amazed by the fashion power which is Kate Moss, I think this photo pretty much proves my point.

Kate Moss as a hippie is very Kate Moss in general, and it just works.

This dress definitely looks like something Rose could have worn in Titanic, so... yeah, timeless.

More like this
10 Times Haley Lu Richardson Dressed Just Like Portia
By Dominique Norman
15 Times Jenna Ortega Dressed Just Like Wednesday Addams
By Dominique Norman
Pamela Anderson's Most Iconic Makeup & Hairstyle Moments
By Olivia Rose Rushing
9 Valentine's Day Hairstyles For 2023 That Look So Dreamy
By Audrey Noble
Get Even More From Bustle — Sign Up For The Newsletter
From hair trends to relationship advice, our daily newsletter has everything you need to sound like a person who’s on TikTok, even if you aren’t.