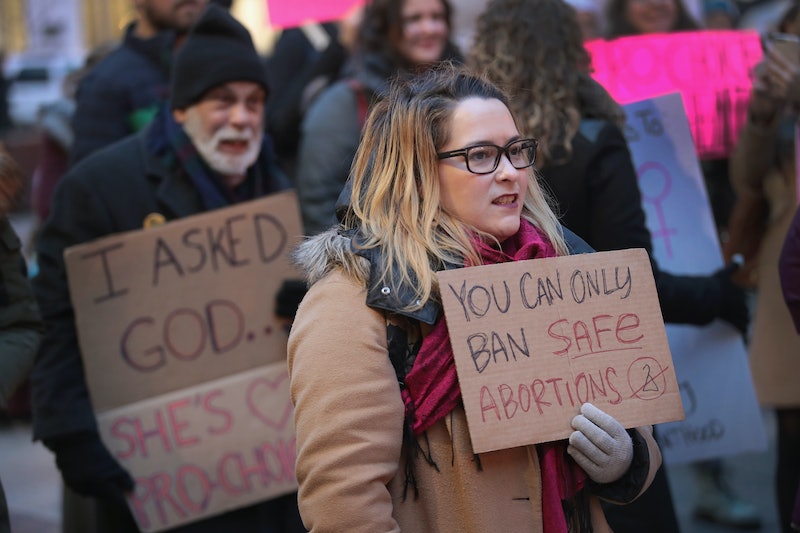 The advancement of anti-abortion bills through state legislatures across the country continues. Just hours after Alabama Gov. Kay Ivey signed a near-total abortion ban into law, the Missouri Senate passed a bill banning abortion at eight weeks of pregnancy. The bill now returns to the state House for a vote, and if passed in that chamber, will head to the desk of Missouri Gov. Mike Parson, who has signaled that he will sign it.

According to CBS News, the bill does not include exceptions for rape or incest. People who obtain abortions past eight weeks wouldn't be prosecuted, as the outlet reported, but doctors who perform the procedure would face five to 15 years in prison.

Missouri already has one of the most restrictive abortion laws in the country. According to the Guttmacher Institute, the state requires that people seeking abortion receive in-person counseling that "includes information designed to discourage her from having an abortion." There's also a 72-hour wait period in between counseling and the abortion, thereby requiring a person to take multiple trips to a clinic. The restrictions on insurance coverage for abortion further hinder access, per Guttmacher, and telemedicine abortion — which research has indicated promotes access to abortion care — is banned.

In a series of tweets on Wednesday, Parson urged Missouri state lawmakers to vote for the bill and send it to his desk. "It's time to make Missouri the most Pro-Life state in the country!" he tweeted. "Thanks to leaders in the House and Senate, we are one vote away from passing one of the strongest #ProLife bills in the country - standing for life, protecting women’s health, and advocating for the unborn."

The Missouri Senate vote comes right on the heels of Alabama's ban on abortion from conception, which virtually prohibits the procedure entirely. If Missouri's bill becomes law, it will be the latest in a string of increasingly restrictive state-level abortion bans. Georgia, Kentucky, Mississippi, and Ohio have so-called "fetal heartbeat" abortion bans on the books, outlawing the procedure as soon as fetal cardiac activity is detected, which can be as early as six weeks into a pregnancy. (Medical experts have noted that the term "fetal heartbeat" is itself inaccurate, and that cardiac activity is a poor measure of viability.)

None of these laws are currently in effect. They are all expected to face fierce legal challenges, which, as the architect of Alabama's bill said, is the point — to bring these laws all the way up to the Supreme Court in the hopes that justices will either overturn Roe V. Wade, the landmark ruling that effectively legalized abortion, or at least chip away at it.

Missouri's abortion bill faced strong opposition among Senate Democrats and abortion rights advocates. According to CBS News, state Sen. Jill Schupp said the bill "is just shaming women into some kind of complacency that says we are vessels of pregnancy rather than understanding that women's lives all hold different stories."

Should Gov. Parson sign this bill into law, there will most likely be a legal challenge awaiting it.