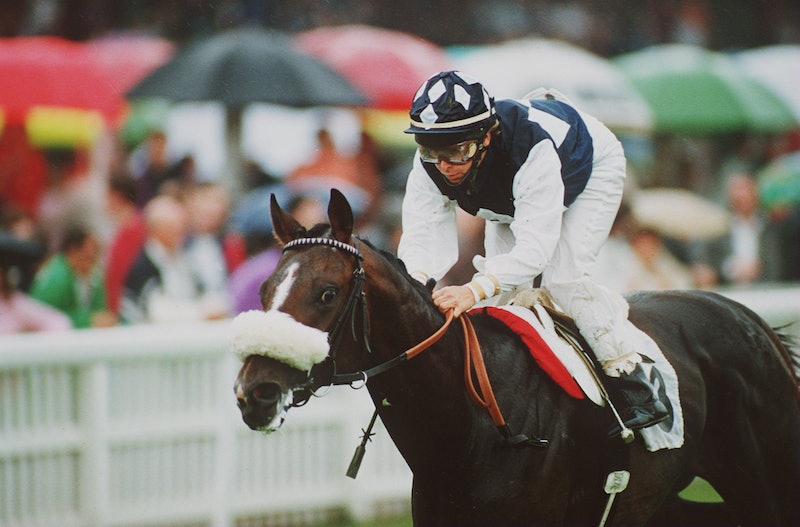 Don't let the lack of women in this year's Kentucky Derby fool you into believing that women haven't left their mark on horse racing. Although the sport undoubtedly remains a largely male-dominated world, women continue to break down barriers as jockeys, trainers, owners, and breeders. So while no women will ride in the 2017 Kentucky Derby, there's been more than a few inspiring feminist moments in American horse racing history.

While female trainers and horse owner have been fairly commonplace at the Kentucky Derby since the 1940s, it's a very different story when it comes to jockeys. In fact, in the race's 142-year history, only six women have ever ridden in the Kentucky Derby and the numbers don't get much better when looking American horse racing as a whole. Overall, women make up only roughly 10 percent of professional jockeys. According to the San Diego Tribune, just 75 of the 750 jockeys licensed in 2013 were women.

For the pioneering women of horse racing, breaking in to the traditionally male-dominated sport hasn't been easy. In 1969, the entrance of Diane Crump as the first female jockey to compete in a pari-mutuel, or betting, race was so controversial she needed a police escort at the event. "There were catcalls," Crump recently told CNN. "[People said,] 'go home, cook dinner, you need to go to the kitchen, you don't need to be out here getting other jockeys killed.'"

Since Crump's first controversial competition, a handful of women have gone on to compete as professional jockeys, inspired by the pioneering women that came before them. In celebration of the Kentucky Derby, here are a few of women's historic achievements in horse racing history:

1. A Horse Owned By A Woman Wins The Kentucky Derby

According to Kentucky Derby history, a Thoroughbred by the name of Elwood helped women break into the sport of competitive horse racing in 1904. Elwood was both the first Derby winner to have been bred and owned by a woman. Bred by J.B. Prather, Elwood was nominated for the 1904 Kentucky Derby by his owner, Laska Durnell, Although most of the then-few female horse owners used their husband's names when entering races, Durnell nominated Elwood under her own name and reportedly without her husband's knowledge.

In 1968, U.S. Olympic equestrienne Kathy Kusner became the first licensed female jockey after she sued the Maryland Racing Commission for denying her application for a jock's license on the basis of her gender.

3. A Woman Competes In A U.S. Pari-Mutuel Race For The First Time

In 1969, Diane Crump became the first female jockey to ride in a pari-mutuel race when she rode Bridle 'n Bit at Hialeah Park. The term pari-mutuel refers to the system of pool betting common to horse racing.

4. The First Woman To Win A Pari-Mutuel Race On A Major American Track

5. A Woman Rides In The Kentucky Derby For The First Time

In 1970, Diane Crump became the first female jockey to ride in the Kentucky Derby, finishing 15th out of a field of 17. While Crump was the first female jockey to ever actually ride in "The Run for the Roses," she wasn't the first woman to try. Toward the end of 1968, Penny Ann Early, who had been granted a jock's license shortly after Kusner, was denied the chance to become the first woman to compete in the Kentucky Derby when the male jockeys boycotted the race to keep her from participating.

6. The First Female Jockey To Ride In The Preakness

Patricia Cooksey, the second woman to ride in the Kentucky Derby, marked another major milestone for women riders when she became the first female jockey to compete in the Preakness in 1985 while riding Tajawa.

7. A Woman Wins A Triple Crown Race For The First Time

In 1993, Julie Krone won the Belmont Stakes, making her the first female jockey to win a Triple Crown race. She would later go on to become the first woman to win the Breeder's Cup in 2003.

Following a career filled with major accomplishments, Krone became the first woman to be inducted into the National Museum of Racing’s Hall of Fame in 2000.

9. Rosie Napravnik Sets A New Best For Female Riders In The Kentucky Derby

Although no female jockey has ever won the Kentucky Derby, Rosie Napravnik became the highest-placing female jockey to race at Churchill Downs in 2013 when she finished 5th with Mylute.