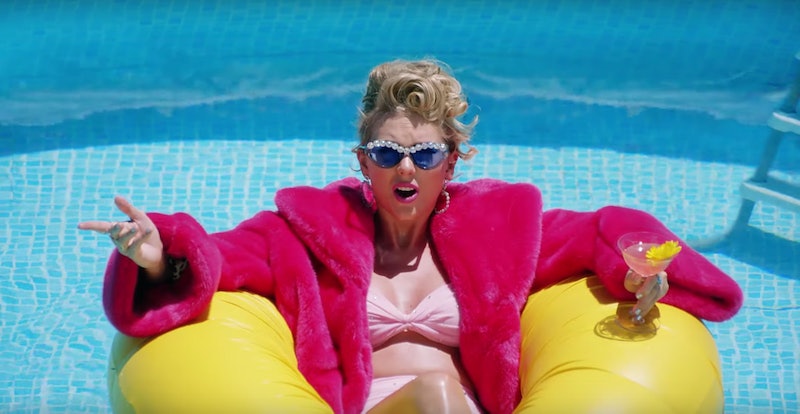 Taylor Swift is certainly doing everything in her power to drive away the Monday blues and fill us all with hope, love, and a lot of pastels. The singer debuted the music video to her latest single "You Need To Calm Down" on Monday, which celebrates Pride Month and calls out online bullying and anti-gay sentiment. It's a powerful message to be sure, but since there's a lot going on in the video, it may be difficult to pinpoint all of the Easter eggs in Swift's "You Need To Calm Down" music video that secretly may be providing clues about her highly anticipated album Lover, which will be released on Aug. 23.

Just like how her prior single "ME!" was chock-full of nods to not only the album's name, but also this latest song title, fans are now convinced that Swift's "You Need To Calm Down" single provides the same type of hidden messages within it and are doing everything they can to work out the clues, one Easter egg at a time. But considering everything that's going on in the video, it can be downright impossible to find them all even for diehard Swifties. So once you're done watching the video for the umpteenth time, check out all the clues below to see if there's any that you missed.

In the video, the talk show host is shown sporting a tattoo on her arm titled "Cruel Summer," which many believe indicates will be another single on the album.

2. Hayley Kiyoko Will Be Featured In Track 5

The singer pops up in the trailer park where the video is set and is seen wielding a bow and arrow. The arrow lands on a bullseye that has the number 5 on display directly in the center. Could this mean that Kiyoko will be featured in Lover on Track 5? It seems highly possible.

There's some debate over whether the number is 13 or 15, but given how often 13 seems to appear in the video, that seems like the safest bet. When it comes to these videos, every detail counts. So if Swift takes the time to wear a necklace with the number 13 on it, you better believe it'll prove to be significant. And since Lover is said to contain a total of 18 tracks, it's definitely possible this jewelry item is meant to draw attention to Track 13.

The video starts out with Swift waking up inside of a trailer, which definitely appears to have a round shape to it full of bright colors. It's almost as if she's revealing all of her Easter eggs about the album from inside of an Easter egg. That would be some Inception-level type stuff right there.

This one isn't particularly revealing, but the connection is still downright hilarious.

6. The Quote In The Painting Connects To Cher

A framed quote pops up multiple times throughout the video, reading "Mom, I Am A Rich Man," which could definitely end up being another song title. However, it's also an indirect nod to a quote Cher once said in an interview from 1996. "I think men are the coolest, but you don't really need them to live," Cher said at the time. "My mom said to me, 'You know, sweetheart, one day you should settle down and marry a rich man. I said, 'Mom, I am a rich man.'"

Just in case you thought it was a spelling mistake or anything.

8. The Writing On The Mailbox

At one point you can see a mailbox outside of a rainbow-covered trailer that reads "Love Letters Only." That's clearly a song title in the making, right?

Elle Woods, is that you? And please let this signify more pop culture nods in future tracks.

Needless to say, this music video is beyond epic and could very well be Swift's finest work to date. So if you weren't already excited about her new album, you definitely are now.