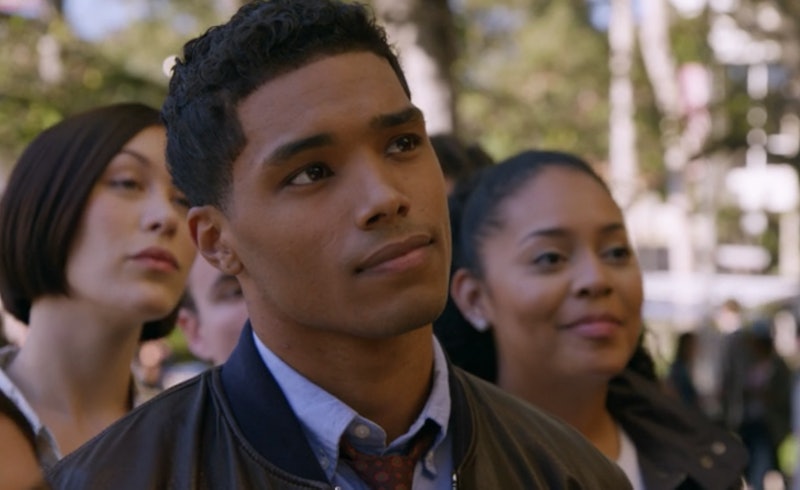 Spoilers for all of Season 4 ahead! After the Season 4 finale, fans are understandably coming up with theories about who Gabriel Maddox is on How To Get Away With Murder. Who is this new mystery man played by Rome Flynn (The Bold and the Beautiful)? No one knows for sure just yet and viewers probably won't find out until Season 5, if HTGAWM even gets renewed. But fans on Twitter have their suspicions already, based just on that one brief appearance.

At the end of Thursday's episode, Gabriel showed up at Middleton University for a tour. He seems like a typical good-looking college guy who knows he's extremely attractive. He couldn't help but hit on the woman checking him in for the tour by asking her for her name, her phone number, and also her email (really?). Eventually, he gave up after she refused him multiple times.

At the same time as Gabriel, Frank was also signing up for a tour (he must be looking to go to law school now that he passed the LSATS) and apparently, he knows this Gabriel. Frank, how many secrets do you have, bro? To add to the mystery, Frank called an anonymous individual about Gabriel and declared, "Hey, looks like the good times didn't last too long. Her kid's here."

What? Who is Gabriel's mom? It's another big conundrum in an already secret-filled universe. Creator Pete Nowalk opened up about Gabriel to reporters Wednesday after a screening of the finale. He described the character as "cool" and "mysterious," per the Wrap. Nowalk also said there's a reason Frank used the pronoun "her" when referring to Gabriel's mother.

"We really like to play with the pronouns here." He continued, "Obviously, Gabriel has a mother and Frank knows of that mother, or knows the mother. So that is a huge mystery and we're going to be giving hints about it all next season."

Nowalk admitted that at this point time Frank seems to be the only character who knows Gabriel. "It won’t be too long, but I think — you know, Frank seems to know who he is. But I don’t know who else does on the show." He added, "It’s going to be really fun to slowly — I want people to get to know Gabriel before we know his origins."

HTGAWM has a lot of explaining to do — and maybe these theories can help narrow down exactly who Gabriel is and why he's here: