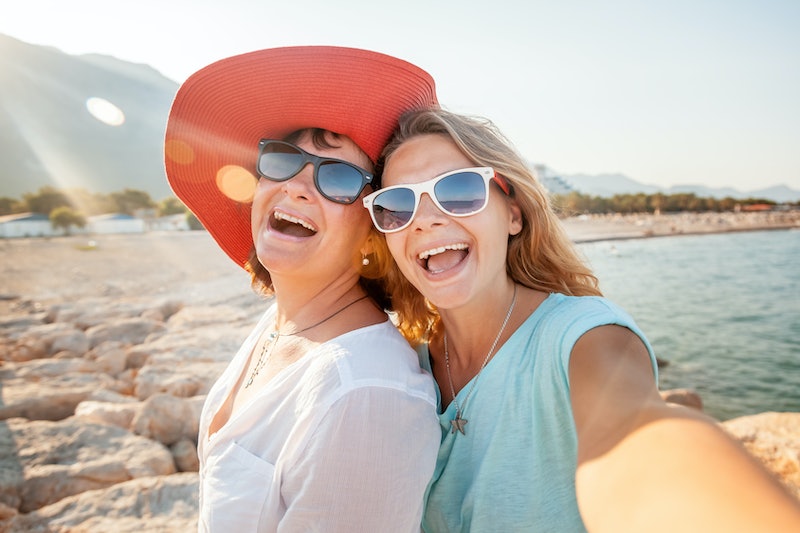 While treating your mom, or someone who's like a mom to you, to brunch for Mother's Day is a tried and true way to show your love, there are also some pretty rad Mother's Day activities to do with your mom this year that aren't brunch. Since your mom is likely expecting brunch, she'll be totally surprised when you treat her to something else instead. After all, variety is the spice of life, and you can go to brunch any old time. Plus, every place will likely be jam packed full of moms on Mother's Day because everyone and their sister is taking their mother to brunch. It's time to give brunch a break. According to the website Golden Moon Tea, brunch emerged as such a popular Mother's Day activity because when it originally began in early 20th century England, it was only for the white-gloved wealthy.

Thus, giving mom the same treatment on her special day elevated her to the status of the elite. Once Hollywood caught on in the 1930s, brunch became a coveted activity. "It was a meal championed by hotels since most restaurants were closed on Sundays and, with church attendance flagging after World War II, people were looking for a new social outlet that also let them sleep in a bit," Smithsonian Magazine reported. "Restaurants soon hopped on the bandwagon and began offering the decadent spreads of food and signature morning cocktails, such as Bloody Marys, Bellinis, and Mimosas." While brunch is certainly boss, there are a lot of other activities that will let mom sleep in, and that she likely gets to enjoy much less often. And, because brunch isn't as bougie as it used to be, it's doesn't hold the same allure as it did in the 1930s. So, consider upping your Mother's Day game for 2018 and thinking outside of the brunch box.

More like this
16 Friendsgiving Recipes Your Besties Will Love
By Alexis Morillo
How Long Does Leftover Stuffing Last? Here's When To Toss It
By Chelsey Grasso and Alexis Morillo
15 Ways To Deal With A Toxic Family During The Holidays
By Gabrielle Moss and Carolyn Steber
TikTok’s Viral Tunacado Sandwich Is The Internet’s Favorite Lunch Right Now
By Alexis Morillo
Get Even More From Bustle — Sign Up For The Newsletter