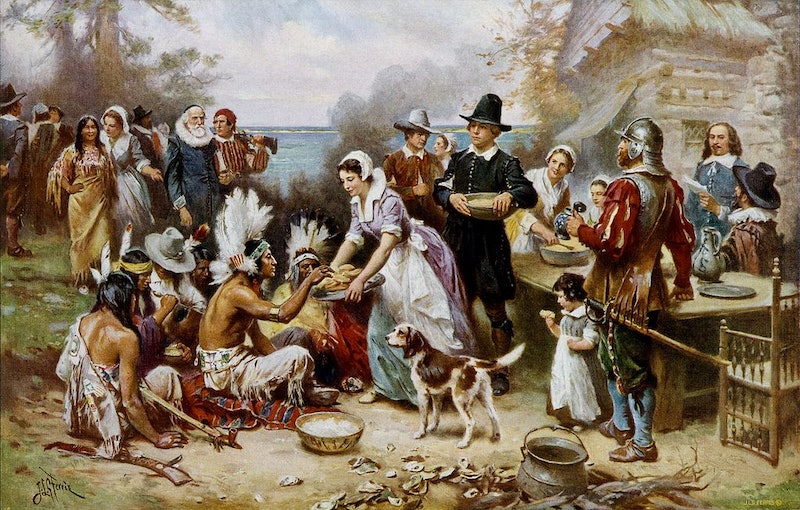 Most people were likely taught similar versions of the Thanksgiving story when they were kids. The story is supposed to go something like this: The pilgrims sail to the New World and land on Plymouth Rock, where they struggle to learn how to survive on a land that's different from the one they left. Luckily, some kind Native Americans show them how to grow corn and help them build alliances with nearby tribes. With the help of the Native Americans like Tisquantum, who you might know as Squanto, the pilgrims learn to live in the New World, and they celebrate with a Thanksgiving Day feast that they share with their new Native American friends. Americans continue to celebrate that version of the story on the fourth Thursday of November as a national holiday.

But that version of the Thanksgiving story is mostly based on myth, according to National Geographic. There's very little historical record of the first Thanksgiving as Americans know it, says National Geographic, which is why Thanksgiving wasn't celebrated as a national holiday until 300 years after it was originally thought to have occurred; President Abraham Lincoln officially declared "a day of Thanksgiving" in 1863, in the midst of the Civil War.

What historians do know about the events surrounding the real Thanksgiving doesn't match up with the stories you heard as a kid. The tale of pilgrims sharing a celebratory meal with their Native American neighbors reflects a revisionist version of history that hides the truth behind what really happened all those years ago — a truth that can be somewhat harsh, but needs to be heard.

It is absolutely vital to debunk Thanksgiving myths because they perpetuate stereotypes about indigenous people in this country, contributing to their modern-day oppression. These are just nine of the myths about Thanksgiving you were told as a kid and what actually happened.

More like this
15 Black-Owned Liquor & Wine Brands To Add To Your Bar Cart
By Alexis Morillo
The Mysterious Gunther Corporation From 'Gunther’s Millions' Has Dissolved
By Brad Witter
10 Equally Romantic & Heartbreaking Books From British & Irish Authors
By Shahed Ezaydi
Rachel Nickell’s Son Wants The Police To Take Accountability Over Errors
By El Hunt
Get Even More From Bustle — Sign Up For The Newsletter
From hair trends to relationship advice, our daily newsletter has everything you need to sound like a person who’s on TikTok, even if you aren’t.