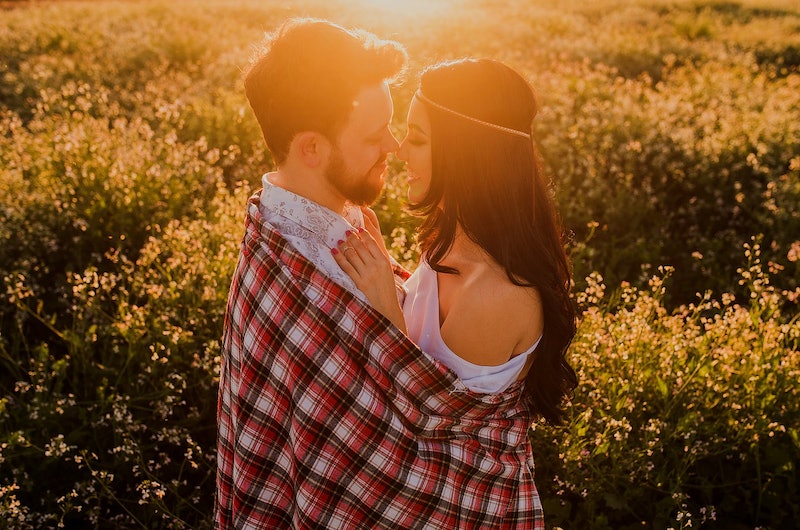 Having some sexual chemistry and spark is essential for any relationship, but it's important to not forget the whole love and respect part of it, too. If you and your partner only have one commonality (the bedroom), it might be a sign your relationship is too dependent on sex and could use a few extra points on the romantic end. So, if you're always darting for the bed upon meeting, it might prevent you from getting to know your partner on a deeper level, to really see whether there's a true connection there.

As a certified health coach, I work with clients on improving their relationships and feeling more fulfilled, accepted, and energized by those around them. And, of course, your significant other holds a heavy weight. Usually (though relationships can differ), a solid, intimate relationship requires both the physical and emotional aspect, where you can bond between the sheets but also through healthy dialogue and activity (non-sexual, here). If there's too much sex, there's probably not a whole lot of time for the other stuff, which is where relationship compatibility really comes into play. Here are 9 signs your relationship is too focused on sex and why you should make time for chemistry, outside the bedroom.

1. You Don't Talk About Non-Naked Matters

Sure, communication about what you like sexually is always great for a relationship, but if the dialogue stops there, it could mean you're both too dependent on sex. "Frequently, one or the other partner wants more or less intimacy. If you don’t seem to have a connection beyond the sexual, the first question to ask is, is that how you both truly want it? If not, the next question is, can you build in more depth from where you are now," says Carol Queen, PhD, Good Vibrations Staff Sexologist, To Bustle.

2. You're Always Touching In Public

Some couples are more PDA focused than others, but if you consistently find yourself groping your partner in public, not fully being aware of your surroundings, it could mean that sexual energy is just too damn high, says Queen. For instance, if you're at an art gallery, and you're the couple in the corner making out (instead of appreciating the paintings), it could signify a dependency issue.

"You know your relationship is too dependent on sex and not deep enough when the goal is always sex. If you are always thinking about sex with that person, sexting that person, or all you ever do when you are together is have sex," it could be a clear sign, says Shirani M. Pathak, a licensed psychotherapist and founder of the Relationship Center of Silicon Valley to Bustle.

Staying home can be fun, but if you're never experiencing fresh air together or going on real dates, it could mean the relationship is too physical. "Another great sign is if you want to go on actual dates, and your sexual partner never wants to or makes up excuses, then, you're likely a booty call and your relationship is too dependent on sex," says Pathak.

"Deep relationships require vulnerability, emotional intimacy, and communication. If these aren't present in your relationship, it's likely not deep enough," says Pathak. Try sharing a personal story and look for his or her reaction. If it's more apathetic, it could mean that the relationship is too dependent on sex and is missing the emotional part.

6. You're Only Happy When Having Sex

Let's say you fight a lot, or the conversation is stale, when you're not doing the deed. If you're only happy when you're having sex, it could mean the relationship won't be sustainable or grow, long-term. "Positive interactions, such as through shared sports, foods, or similar, also are important to avoid boredom and dissatisfaction. Putting all your positive 'eggs' in the sex basket is risky," says Heather Cohen, a research scientist consulting for Liberos, a sexual biotechnology company to Bustle.

7. You Feel Shy Outside The Bedroom

"If you only feel close to your partner when having sex, the relationship has become too dependent on it," says Kimberly Hershenson, LMSW, a NYC based therapist, to Bustle. "You should feel you can talk to your partner about anything and receive their support. If you are using sex as a way to cope with issues instead of growing and sharing as a couple this is a problem," Hershenson adds.

8. You Make Up Solely With Sex

Hey, having some hot makeup sex is never a bad thing (am I right?), but there's a fine line when it comes to really getting over the issue and improving for future situations. So, if you're not addressing the problem through communication, before having sex, it could indicate dependency, says Ana Aluisy, couples therapist in Tampa, FL, to Bustle.

9. You Only Hang Out Late At Night & Alone

If you're only seeing each other late at night (for sex) and refuse to get to know each other's friends and family, it could mean that you're not looking at the relationship from an emotional, long-term standpoint, and it's too heavily revolved around sexual chemistry, says Aluisy.

If you notice any of these signs, it could mean your relationship might only exist in the bedroom, and less in the outside world. If you're both on board, it should be fine, but it's best to check in with your partner to see where he or she stands.