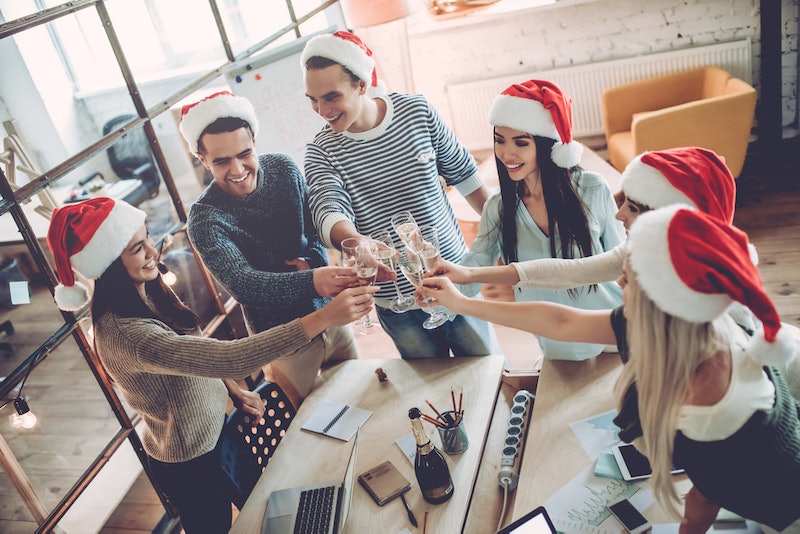 Anyone's who seen the "Little Kicks" episode of Seinfeld where Elaine makes a fool of herself at an office party fears they're one glass of wine away from their own embarrassing little kicks dance. As it turns out, those fears are well founded. Regrettable things people have done at holiday parties include drinking too much, hooking up with a co-worker, and telling off the boss. If you think it can't happen to you, new research from OnePoll in conjunction with online invitation company Evite found that one in three people have committed a work holiday party faux pas.

Um, guilty. I once made out with a co-worker (who, to be fair, I was dating) in front of everyone during a work holiday party. My behavior was slightly less embarrassing because at the time I was working as a bartender where that sort of thing wasn't totally out of the norm. If you work in an office, letting loose at the annual holiday party could come back to bite you in the butt. However, despite there being a 33 percent chance you'll make a fool of yourself at the office holiday party, you're probably pretty unlikely to skip it.

In fact, you may even be looking forward to it like 75 percent of those polled. "Anything can happen at an office holiday party, which is why it’s no surprise that the majority of employees look forward to it every year," Evite's in-house party specialist Julian Clark said in a press release about the study. If you do end up being the one in three who does something regrettable, here's what you're most likely to do.