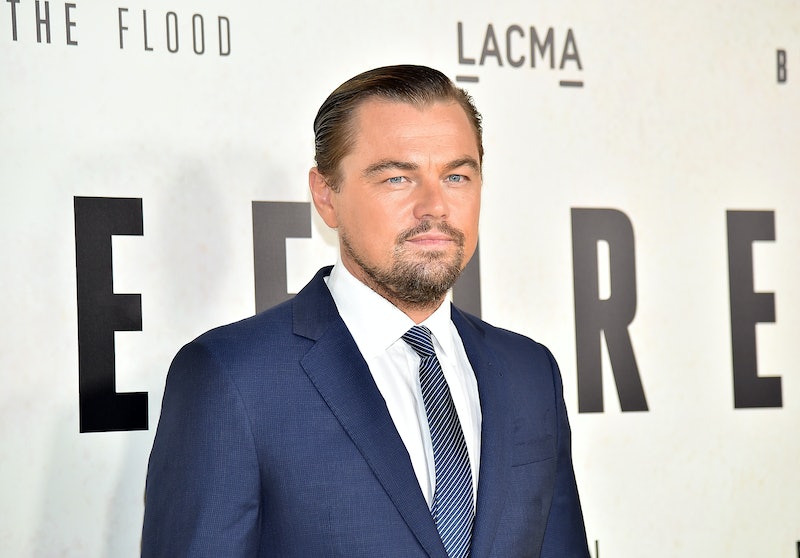 Leonardo DiCaprio is teaming up with Martin Scorsese once more to star in the director’s upcoming film based on Erik Larson’s 2003 nonfiction novel of the same name, The Devil in the White City. The film will be set in 1893, and it’ll tell the story of an architect named Daniel H. Burnham and an infamous serial killer named Dr. H.H. Holmes, whom DiCaprio is set to play. Scorsese told The Toronto Sun that the film’s script is still being written, so not too much is known about it just yet, but there are some very interesting things you should know about DiCaprio’s serial killer character.

The actor has played numerous intriguing, complicated characters throughout his decades-long career, so it's no surprise that his next role looks like it'll be equally as outrageous as the rest. As the film will show, H.H. Holmes was a serial murderer said to have claimed the lives of around 200 victims in various gruesome ways. It sounds like the movie will be a pretty wild ride but, before DiCaprio officially steps into the shoes of this character, let's take a moment to go through just a few things you should know about Dr. H. H. Holmes since he'll be appearing on the big screen soon enough.

1. He Was One Of America's First Serial Killers

Nothing ruins the mystery of movie-watching experience faster than that “based on a true story” bit during the opening credits. So you can imagine how creepy it is just knowing that H.H. Holmes was a real serial killer in the late 1800s, and he’s actually considered one of America’s first, according to Biography.

Born on May 16, 1861 in Gilmanton, New Hampshire, Mudgett changed his name to Dr. H.H. Holmes (an apparent homage to Sherlock Holmes, as Larson mentions in his book) in 1886 after he began working in a pharmacy. History.com mentions that the owner of said pharmacy mysteriously disappeared before Holmes eventually took over the business.

3. He Built A “Murder Castle” To Torture His Victims

Between 1891 and 1892, Holmes had a “Murder Castle,” which he dubbed a hotel, constructed in Chicago. It was a three-story building that he used as his own living quarters and a place to torture and kill his victims. According to Time, the “castle” apparently had windowless rooms, gas chambers, chutes made for disposing of the dead bodies, and even an incinerator to burn the bodies of his victims.

4. An American Horror Story Character Was Based On Him

If you’re an American Horror Story fan — particularly of the fifth season, Hotel — then Holmes' story likely sounds familiar to you, since Evan Peters’ character in that season, James Patrick March, has more than a few things in common with him. To refresh your memory, March was a serial killer (check) in a creepy hotel (check) who used various rooms and chambers to kill his victims in very gruesome manners (double check). The Line-Up notes that Peters' character was inspired by Holmes.

5. He Sold The Bones Of His Victims To Medical Schools

According to Murder by Gaslight, Holmes would dump dead bodies down a chute where they would go straight to a basement complete with a furnace and a dissecting table. The site also claims that he'd usually remove the flesh from the skeletons of the bodies, clean the bones, and sell the remains to medical schools.

6. He Was Also A Con Artist

Holmes was eventually caught by the authorities, but it wasn’t actually because of his murders. As explained by Crime Museum, it was, instead, due to an insurance scam — which was one of many — gone awry.

As Crime Museum points out, the insurance scam in question involved Holmes' “business” partner, Benjamin Pitezel. Holmes created a plan for Pitezel to fake his own death so that he could then run off with his life insurance money. Somewhere down the line, he decided to just murder Pitezel for real, but by then the authorities had already been onto him. He eventually stood trial and was hanged for Pitezel’s murder in 1896 at Moyamensing Prison in Philadelphia.

8. He Was Paid For His Confession

According to Mysterious Chicago, Holmes was paid by a number of newspapers to confess to his crimes. But the reason that there’s still not very much known about his life or his murders is that he gave different accounts of his doings to each source. He confessed to murdering a total of 27 people, though the number could be well over 200.

9. His Remains Are Being Exhumed Right Now

According to CrimeFeed, Holmes requested to be buried in a “double-deep coffin” covered with cement to prevent anyone from stealing and dissecting his remains, but he also may have made the request in an attempt to make it more difficult for his body to be identified. Rolling Stone reported in early May that body is now being exhumed because of a theory stating that the con artist convinced another prisoner to be executed in his place so that he could flee the country. But Larson, for one, isn’t convinced, as People reports; he recently told the AP that he has “absolute confidence the body in that grave is Holmes.”

So, yeah, Holmes' story is super creepy, to say the least, but I'm sure that won't stop me from buying a movie ticket.

More like this
Everything To Know About Jordan Peele's 'Nope'
By Alyssa Lapid, Morgan Leigh Davies and Radhika Menon
12 Documentaries & Films About Cults From Netflix UK To Hook You From Start To Finish
By Kay Leong
The ‘Squid Game’ Season 2 Renewal Teases A Creepy New Figure & A Return
By Brian Anthony Hernandez and Bustle Editors
The “Beatrice Six” Were Awarded $28 Million After Their Wrongful Convictions
By Brad Witter
Get Even More From Bustle — Sign Up For The Newsletter