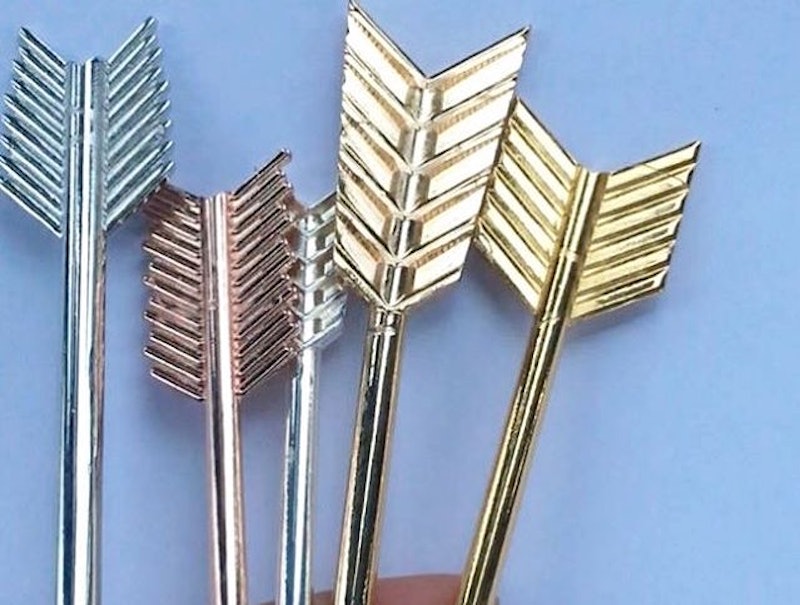 Unless you've been living under a rock for the last four months, you know that Storybook Cosmetics is the biggest thing to hit the beauty industry since matte lip glosses. The brand announced their inaugural collection of Harry Potter-inspired makeup brushes via there until-then unheard of Instagram page back in August, and, not surprisingly, the Internet went totally insane. The rest, as they say, is history (ha.).

Since that first blow-up Instagram post this summer, Storybook has teased more Harry Potter products, Mean Girls, Wizard of Oz, and Romeo and Juliet palettes, and, most recently, a Star Wars-inspired lightsaber shaped brush set. They kill it with their ideas time and time again, and their fan base seems to be growing by the minute — they have 171K Instagram followers, and according to their Q + A account @StorybookKeeper, they received thousands of orders per minute when they launched their brushes in October.

Needless to say, Storybook Cosmetics has become a major name in the beauty industry in only a matter of months. “Our Wizard Wand makeup brushes have changed not only our business but our lives!” says Erin Maynard, one of the three sisters behind the brand who I had the pleasure of interviewing via e-mail.

Here are nine things she shared with me about the brand and what all of their fans and followers can expect in 2017.

1. It Was Inspired By Geek Culture

"For a long time we talked about the need for a cosmetics company to tap into the exploding "geek culture" and finally one day, we decided to be the ones to do it!" says Maynard. "It all started when Missy said 'Makeup brush wands.' And Mandy and I replied with 'Yep.' And it was settled. We are truly obsessed with makeup and wizards, it was just an epiphany one day. We stayed up all night talking about it."

2. The Team Had No Idea They Would Find Success So Quickly

The Storybook success story is as heartwarming as it was crazy. "We didn't expect the viral reaction at all! It's pretty unreal to have our brand mentioned as a top trend/beauty brand for 2016," says Maynard. "We still can't process that this is all real...and our company!"

3. They Had To Push Their Launch Date Up Two Months

The internet can be an impatient place, as the Storybook team learned early on. "The viral nature of the product launch catapulted our business into hyper-drive," says Maynard. "We were planning to launch in December originally but the internet was begging for them sooner so we started a pre-sale and sold out almost immediately."

4. It's Run By Identical Triplets

And each one of them is responsible for a different aspect of the brand. "We may be identical triplets, but we all have different gifts and talents so it is kind of divides itself out," says Maynard. "I do the business functions like manufacturing, ordering, sales, etc. Missy lives in LA so she is meeting with makeup labs now to develop out our cosmetics line. And Mandy is an amazing designer so she does all of our prototypes, artwork, and packaging.” I wonder if they ever pull MK + A switcheroos in business meetings.

5. The Founders Are Spread Across The Country

Did anyone else have a vision of a room with bunkbeds decorated with all kinds of Harry Potter gear, and a shared bathroom with every beauty product imaginable? Sadly, that's not exactly the case. "We work from our homes in Omaha and LA," says Maynard. "We are in constant communication with each other via text coming up with new ideas!" FYI: This is their mom. How amazing is that?!

6. Their Mission Is An Important One

7. They Have A Favorite Collab

Good news for Storybook fans everywhere: "We are currently working on creating a full-line of cosmetics," says Maynard. "We are hoping to have some of the new products out in early 2017!" says Maynard. New products in the works include a Storybook Cosmetics Quill & Ink™ liquid eyeliner with a classic feather quill and ink pot, more exclusive eye-shadow palettes, lipsticks and a new set of brushes.

9. They Will Never Stop Appreciating Their Fans

"It's pretty amazing, what fans can do to support your dreams!" says Maynard. "We just want to thank all of our fans for their patience! We want them to know that it is so going to be worth the wait! Just like a great storybook, amazing things take time!"