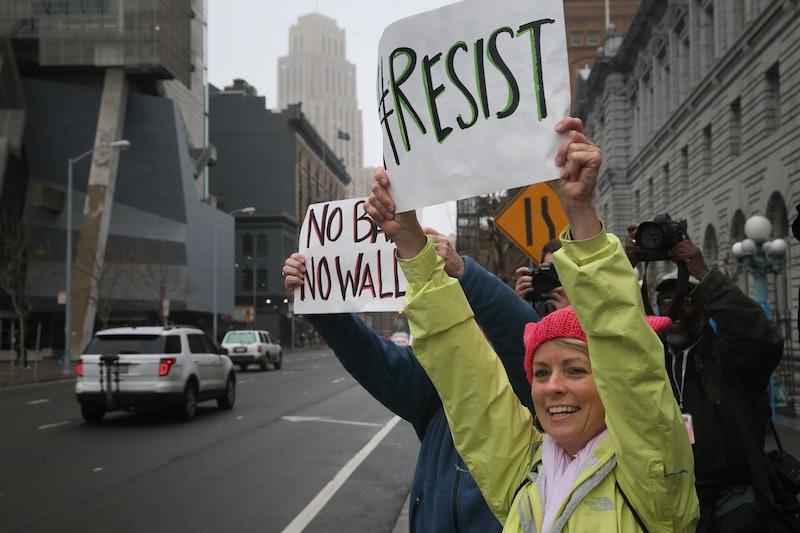 Since Donald Trump was elected president, protesting has surged into the mainstream. The Women's March drew millions around the globe, and many of Trump's executive orders have been met with staunch, immediate opposition nationwide. Learning how to protest effectively can be a daunting task, particularly for people who don't have previous experience in organizing or political activism, but the past several weeks have made it clear that millions of Americans are eager to try.

The #GrabYourWallet boycott is one example of an anti-Trump protest that appears to have had significant results. Founded last fall by Shannon Coulter and Sue Atencio, Grab Your Wallet seeks to convince companies to stop selling Trump-branded products through organized boycotts.

After sales of Ivanka Trump products at Nordstrom reportedly plummeted by 70 percent, the department store announced this month that they would discontinue sales of the Ivanka Trump brand entirely. Other retailers have followed suit: Neiman Marcus also recently announced it would stop selling Ivanka Trump items, and Sears and Kmart just discontinued online sales of Trump Home products.

Donald Trump tried to fight back by tweeting criticism of Nordstrom, but the president's angry words only helped the department store, whose stock rose seven percent afterwards.

At a time when many Americans feel powerless to fight back against the Trump administration's rhetoric, policies, and alleged conflicts of interest, Grab Your Wallet seems to have been uniquely successful at persuading companies to change. Bustle spoke with Shannon Coulter to get her advice for implementing successful protest strategies.

It's no coincidence that #GrabYourWallet was born as a hashtag. Its roots in Twitter enabled potential participants to learn about it and spread the word quickly. While it may seem obvious to use social media to promote a protest movement, Coulter used Twitter to identify the desire and passion for a protest movement and worked from there.

She tells Bustle that the idea was born last year while she was venting on Twitter about how she was frustrated that companies continued to work with the Trumps, "profiting directly from a campaign that I associate with hate and intolerance and misogyny." The strong response she got to those Tweets is what inspired her to start the movement.

2. Don't Be Afraid To Start Simple

One of the most daunting things about protesting is feeling like you have to do too much too quickly. Grab Your Wallet, conversely, originated using tools with which many Millennials are already quite familiar: a simple Google doc that anyone could see and reference. (The boycott now operates through an official website, but the spreadsheet found there is still fairly similar in form to a Google doc.) Moreover, despite its basic setup, the existence of the document enabled Coulter to monitor the numbers of people visiting the spreadsheet, which helped give her a sense of the potential size of the boycott.

3. Be Accessible And Available

If you've posted about #GrabYourWallet on social media, you may have already been retweeted by Coulter, who frequently monitors activity on the hashtag and interacts with people across the country who've posted their frustrations with the Trump brand. Coulter's feed functions as a summary of all major news about the boycott, coupled with testimonials from individuals around the country who have joined in. This helps participants from around the country feel like they are part of a bigger movement, and it also enables Grab Your Wallet to respond quickly to any questions or controversy. For example, a section on the GYW website that explains the motivation behind each boycotted company.

4. Plan To Deal With Changes

Another advantage to Grab Your Wallet's spreadsheet-based structure is that it allows the boycott to adapt to change. When Nordstrom announced that it would no longer be selling Ivanka Trump products, all Coulter had to do was remove it from the boycott list. Participants who had formerly been boycotting Nordstrom were quick to show their support for the retailer online, posting screenshots of online orders and pictures of trips to the mall. After Nordstrom changed its policy, GYW simply moved other companies higher up on its boycott list. As of this writing, a "top ten companies we're boycotting" list on the website currently includes Amazon, Bed, Bath & Beyond, and Macy's, among others.

5. Emphasize What People Can Do Right

Self-critique can definitely be a good thing, but some activist organizations or spaces can be so self-critical that it can feel as though there's no right way to protest. Grab Your Wallet avoids this by explicitly featuring retailers that they've determined to be "Trump-free," including Barnes & Noble, and encouraging consumers to shop there instead of Trump-supporting alternatives. Providing a positive action, as well as a negative one, makes protesting seem more achievable and even appealing.

6. Use Protest To Empower Participants

While some acts of protest are necessarily difficult, that doesn't mean that protesters need to feel worn-down and exhausted. Grab Your Wallet seeks to empower women by helping them recognize the power that their financial decisions have to affect change. "I think that young women are ... an epic, epic force in the boycott," Coulter tells Bustle. "The stores in question recognize that they are the future of their consumer base, so they have a lot of interest in courting them and keeping them as customers. So ,if young women were to make themselves heard on this front, it has enormous influence."

If an anti-Trump Millennial woman doesn't have the money to send thousands of dollars to Planned Parenthood or the ACLU, learning to make more conscious decisions about the spending habits she already has can be an empowering way to stand up for what she believes in. Many of the companies that have stopped selling Ivanka Trump products report doing so because sales plummeted — meaning that the individual decisions of hundreds or thousands of women added up together. The ultimate message that GYW sends its participants is that an individual's choices have value and clout.

"The actionable, concrete thing that the company can do is key for successful protest," Coulter says. Grab Your Wallet did not merely seek to shame companies who had worked with the Trumps; it gave them a tangible alternative to being boycotted. "All or close to all of the participants would love to return to these companies as customers, but they don't feel they can do that in good conscience right now," Coulter says. The Grab Your Wallet protests presented retailers with a clear choice: continue to sell Trump products and risk losing business from valued customers, or stop selling those products and be removed from the boycott list.

Just because the Trumps themselves may be unpersuadable in terms of their views or policies, it doesn't mean that other parts of society aren't. "For me," Coulter tells Bustle, "[Ivanka] is not the center of this, for me the companies that we're boycotting are at the center of this, and the action is aimed at helping them ... to help society evolve toward a more respectful, inclusive direction." Trump's rhetoric is less damaging if it's spoken in a society that refuses to spend its money supporting it.

One of the most unique things about Grab Your Wallet as a modern anti-Trump protest is how very easy it is to participate. Not shopping somewhere, of course, takes no time and no money. Coulter also points out that boycotting enables people to participate who otherwise don't like to talk politics openly. "A lot of Millennial women are in the first part of their careers and they are rightly concerned about making their participation in political movements known to the general public, so it's great to be able to just express private concern as a consumer without necessarily having to go fully public with it," Coulter says.

The private purchasing nature of the boycott enables people in swing or red states to participate without necessarily being drawn into an argument about politics.

Ultimately, not every form of protest will look like Grab Your Wallet. Some effective protest methods may require unspecific aims or high barriers to participation, for example — but the apparent success of this movement suggests that many of its primary benefits could be applied to resisting Trump elsewhere. The case study of Grab Your Wallet, and its apparent success, can tell us a lot about how those protests can be effective going forward.