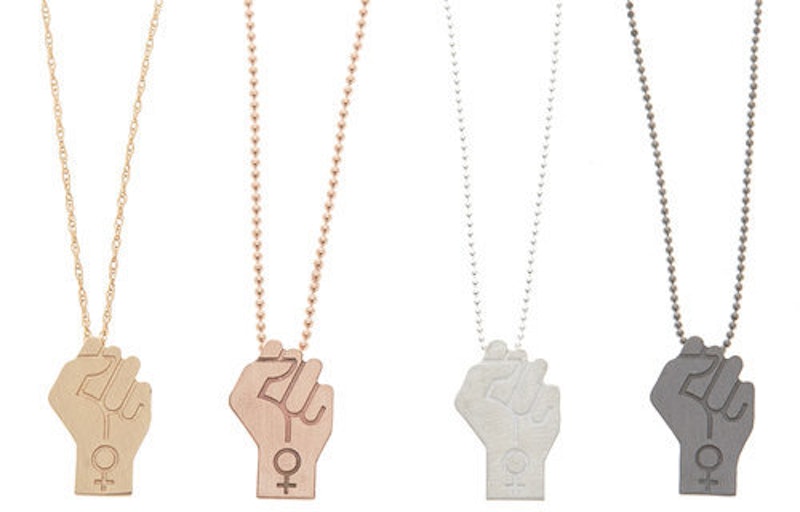 Sometimes you want to wear your beliefs and solidarity on your sleeve. But knowing that your charitable fashion actually gives back in a meaningful way can be difficult. In anticipation of the Women's March, several brands are releasing products that are protest ready — but only some of them actually make an impact. All of these items donate all proceeds to the Women's March or women's organizations, so you can look great at the protest and support the cause all year 'round.

There are tons of different forms of political attire out there. I'm talking shirts that have feminist slogans on them, hats with logos on them, and even jewelry that speaks for itself. No matter what item you choose, there's a bigger message than just what you're wearing. Where your money is going is just as important.

Not only do these below items make a statement, but they also donate directly to women in need. Choose one or combine them all for the ultimate charitable outfit. The choice is yours.

Just like Justin Bieber and Kylie Jenner, the Women's March has a merch line of it's own. You'll get a shirt to remind you of the second-annual event as well as give a donation to the cause. The top is only available for a limited time, so you'll want to shop fast.

You might remember this item from last year. Stella And Bow created this completely charitable item after President Trump uttered the words "nasty woman" and the brand is bringing it back for a second chance to shop. All proceeds from the bracelet go towards Planned Parenthood.

This collection was created to celebrate how 2016 changed us all. You have the choice of the slogan "2016 Made Me" followed by either "Wiser," "Nastier," "Blacker," "Gayer," or "Braver." Every single penny of the limited edition shirt goes to the ACLU.

It's time to flip the patriarchy on its' head, and this shirt is the first step. The brand has an entire website filled with charitable designs, but this shirt particularly donates proceeds to Southern Poverty Law Center. Extra Official has mugs to hats to everything in-between.

From now until Jan. 20, 100 percent of the sales from this necklace in all shades will go to Planned Parenthood. After that, it will go back to the 15 percent donation that it typically entails.

Remember the original day and look great with this girl power pin. Each one is limited edition and donates all proceeds to the Women's March.

7. Power To The Polls Sweatshirt

Power to the Polls Unisex Sweatshirt, $45, The Outrage

While your on the site, there are tons of great charitable clothing to shop as well. Just like the pin, every single penny goes to support the Women's March.

There's also the option of going straight to the source. Odds are that the charity of your choice has their own merch for sale, and there's no better way to know your proceeds are going to the cause.

It'll be a chilly march for many, so why not bundle up with a charitable item? Every penny from this hat goes towards the National Coalition Against Domestic Violence on top of being adorable.

Whether you're looking to march with others or simply donating through these items in solidarity, there is no wrong way to support the cause. Of course, there's also the option of donating directly to the Women's March or your favorite women's charity.

Power to the women.

More like this
8 Charities To Donate To During Black History Month
By Alexis Morillo
42 Black Owned Fashion & Beauty Brands To Support Today & Always
By Mekita Rivas, Shea Simmons, Kui Mwai and Dominique Norman
5 Signature Accessories Carrie Bradshaw Wore Over & Over Again In SATC
By Dominique Norman and Kelsey Stiegman
This 'One Tree Hill' Wardrobe Error Is Going Viral On TikTok
By Brad Witter
Get Even More From Bustle — Sign Up For The Newsletter
From hair trends to relationship advice, our daily newsletter has everything you need to sound like a person who’s on TikTok, even if you aren’t.