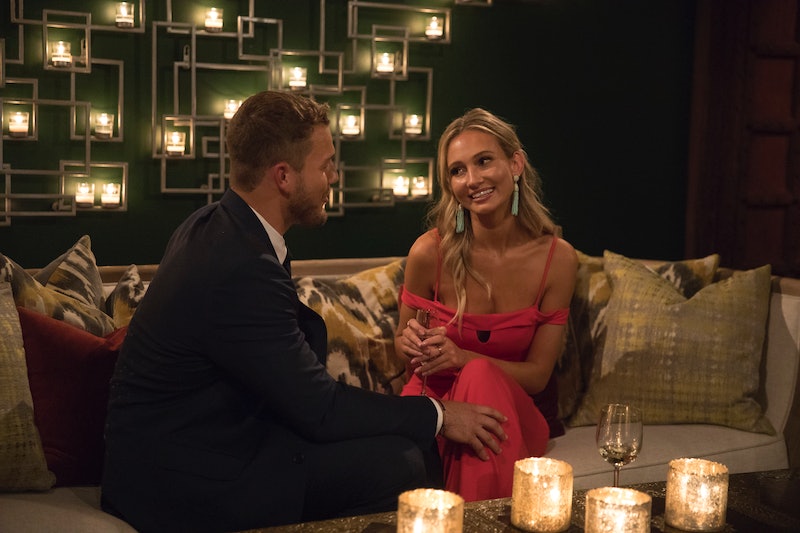 If you're a fan of The Bachelor, you know that the first episode of the season is special because of the always-entertaining and sometimes-wacky limo exits. But, one Bachelor contestant's limo exit, featuring a fake Australian accent, on the Jan. 7 premiere of the upcoming season may just take the cake for the most amusing of all time.

On Jan. 3, the official Bachelor Twitter account released a sneak peek at one of the contestant's... interesting manner of getting lead Colton Underwood's attention. The contestant, Bri, greeted Colton very casually. And she did so complete with a surprisingly good Australian accent. The only thing is, she's not Australian at all.

"I was hoping that you're kind of a sucker for accents," she told Colton during the greeting, after he asked about the accent (and she suavely said that the accent, specifically, was from Australia). In one of her In The Moment interviews, she revealed, "I'm not really Australian but you have to do what you can to stand out." Well, faking an Australian accent is one surefire way to do just that.

The Bachelor Twitter account punnily captioned the video, "Is this lie going to take her down (under)?" So, fans could be looking at a potential #AccentGate during the upcoming season, depending on how Bri handles this whole ruse, of course.

This whole accent situation is simply wild. But, as it turns out, it's made Bri something of an instant favorite amongst Bachelor fans and haters alike because of how truly hilarious the whole matter is.

How's This Gonna Go Down?

It's unclear just how long Bri is going to keep this whole accent thing going. Is she waiting for a rose on the first night? Final six? Hometowns?! As this user pointed out, the longer she waits, the more hilarious this becomes.

Bri's got a fan in this Twitter user. They said that they're watching this season simply to see how this pans out.

The contestant's Australian accent "scam" is the reason why this user is rooting for her. Imagine if Bri keeps this ruse going throughout the entire season? Yikes.

This Twitter user imagines a world where Bri makes it to hometowns, still has the accent, and makes her family go along with the silliness, too. And that's a world I want to live in.

Another user is so into this faux Australian accent idea that they've watched the Bachelor's clip "30 times." Same.

As for those from Australia, they're not all down with Bri's take on the accent.

One user jokingly called Bri a "hero" for using a fake Australian accent. So, count them as yet another instant fan.

As another user pointed out, Bri technically didn't lie to Colton about where she was from. She simply said that the accent she was speaking with was from Australia. You have to give her points for creativity.

This user from Australia is actually super into Bri's faux accent. They're so into it, in fact, that they're rooting for her to win it all.

You just know that Bri's clever ruse is going to inspire some ideas for future Bachelor contestants. Maybe, like this Twitter user said, you'll be hearing a faux Scottish accent this time next year?

Yet another fan said that this clip is "the best thing I've ever seen," which kind of says it all.

While it remains to be seen just how far Bri makes it in the competition (with or without her faux Australian accent), it's clear that the contestant has already captured the attention of many with her wild take on the classic limo exit.