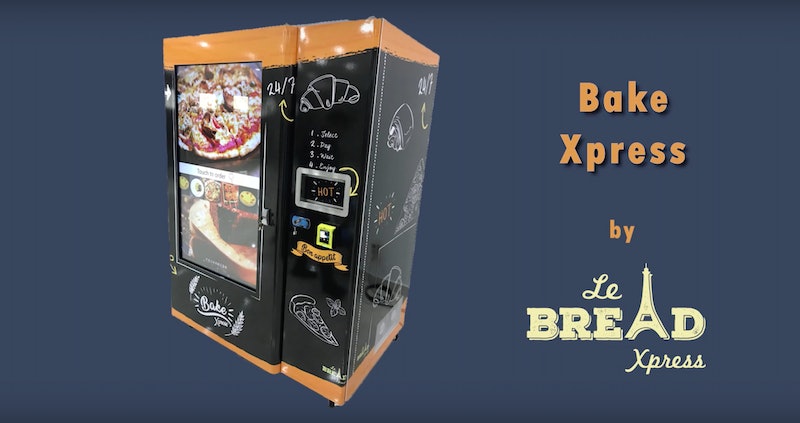 “Le Bread Xpress” is your average, ordinary vending machine in the way that a Transformer is your average, ordinary car. It works like this: The machine is stocked with about 100 par-baked loaves, provided from a local, wholesale bakery. The loaves finish baking in small batches inside the vending machine. When someone swipes their card and makes a purchase, the machine doles out a warm, freshly baked baguette. Not just a slice of bread that’s heated up — bread that actually finished baking inside the vending machine. So, customers get fresh, hot bread and we all get one step closer to the machines winning.

Benoit Herve, CEO of Le Bread Xpress, explains in this 2017 video for AJ+ the vending machine is technology meets French artisanal food. The customer’s experience with Le Bread Xpress is less than a minute from swipe to snacking on bread with each loaf coming out in about 30 seconds. For that reason, Herve prefers to call his machine a “micro-bakery” rather than a vending machine, according to SF Gate. I will call the machine whatever it wants so long as it gives me fresh bread and promises never to hurt me.

SF Gate’s Alix Martichoux taste-tested one of Le Bread Xpress’ baguettes, even giving a blind taste test to colleagues to see if they could tell the difference between a local bakery’s baguette and the one from the vending machine. What does vending machine, ahem, micro-bakery bread look, feel, and, more importantly, taste like? “The real Le Bread Xpress baguette had a much thicker crust [than the local bakery’s bread] that you could hear crunch as you tore into it,” Martichoux described. “The outside was still dusted with flour, making it look more artisan, and the inside showed much bigger air bubbles in the dough.” Dusted with flour?! Are machines perfecting ... rustic imperfections?!?

So, could people decipher the robot bread from the human bread? If they could, they didn’t care. “Pretty much everyone picked the Le Bread Xpress loaf as their favorite for its crunchy crust and airy interior,” Martichoux wrote.

As if freshly baked baguettes weren’t enough, Herve is developing vending machines that can also make warm croissants, quiches, and fresh pizza. If you’re looking to give the freshly baked robot bread a try in the U.S., you’ll need to go to San Fransisco. It’s in Stonestown Galleria near San Francisco State, per SF Gate’s article.

“The issue with the U.S. market is the need and the customer taste for fresh bread is not the same as Europe and Canada," Herve told SF Gate. "American people, when they go and buy bread, they want to buy something they can eat right away. Unless you put some cheese or charcuterie next to the machine... they’re not just going to eat bread.” Who are these Americans who don’t appreciate fresh bread? Show me to them and I will lovingly prove them wrong with crusty carbs and many ciabatta loaves.

Like with any machine-driven, robot usurping, there are a few setbacks to Le Bread Xpress, food waste being a big one. Any of the machine’s baked baguette loaves sitting for more than 90 minutes are discarded as to not serve customer’s dried-out or stale baguettes.