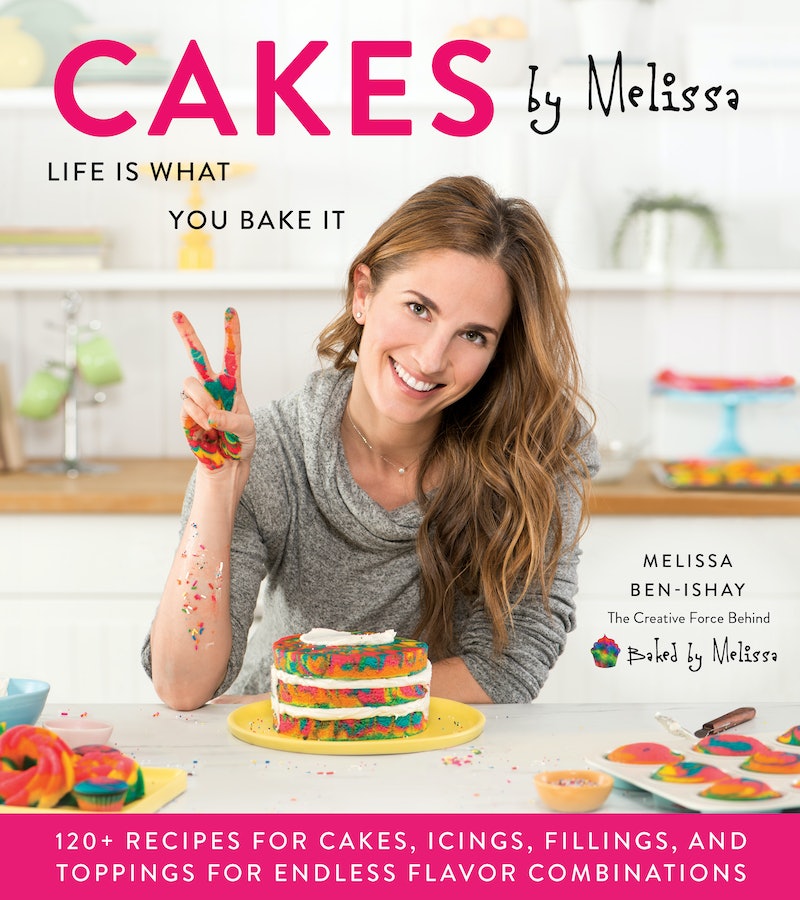 Since 2009, Baked by Melissa has cornered the market on treats that are both beautiful and teeny tiny. Today, Bustle is excited to announce that Melissa Ben-Ishay (yes, the Melissa) is getting into the publishing game. You read that correctly: Baked by Melissa is releasing a cookbook, so all your bite-sized dreams can finally come true.

Like so many success stories, Baked by Melissa sprang from disappointment. After being fired from her publishing job in 2008, Melissa Ben-Ishay decided to pursue what had always been a passion: creating miniature treats that tasted great, but weren't a meal unto themselves. A li'l soupçon of sugar. A boop of macaron. A truly satisfying bite (or three) of cupcake, all with Melissa's signature flair. Once they released a line of eight gluten-free cupcakes in 2015 and macarons in 2016, it was official: Baked by Melissa was the cupcake spot in New York.

On shelves October 3, 2017, Cakes by Melissa (published by William Morrow, an imprint of HarperCollins Publishers) will feature more than 120 recipes for cakes, icings, fillings, and toppings that you can mix and match to create a perfect, personalized dessert. In addition to the secrets behind Baked by Melissa favorites like Tie-Dye cupcakes and Chocolate Chip Pancake cake, Melissa will be sharing a host of new recipes and never-before-seen tricks, including a fill-in-the-blank recipe form and a crash-course in baking basics.

Even sweeter? We've got the exclusive cover reveal:

Ugh, it's so freaking cute.

"I can't wait to share this book with everyone! It includes all of my favorite recipes for cakes, icings, stuffings and toppings, and it's laid out in a unique way that follows my own creative process," Melissa tells Bustle. "My goal is to empower people to bake outside the lines and make mouthwatering cakes they've only dreamed about for them and the people they love."

Craving a sneak peak inside? Of course you are. Check out this behind-the-scenes video for a taste of what's in store (and no you can't make me stop these dessert-related puns):

What sets Cakes by Melissa apart from the crowd is her ability to empower readers in their baking adventures. If you've ever watched a cooking show, you've probably heard contestants nervously whispering amongst one another about the science of baking, and the necessity for precision. That's all true (Mary Berry and Paul Hollywood have drilled that into my brain), but adhering to that rules, rules, rules mentality can mute creativity. Melissa takes the opposite stance. Try new flavors! Try new textures! Don't see a recipe for something you've always wanted to make? Melissa provides the tools for discovery.

I know that October feels endlessly far, but the book is available for pre-order now. And if you simply can't wait to get your paws on some Baked by Melissa treats, you do have options. For Manhattanites, there's same-day delivery. For the rest of us, there's nationwide shipping on their online store.