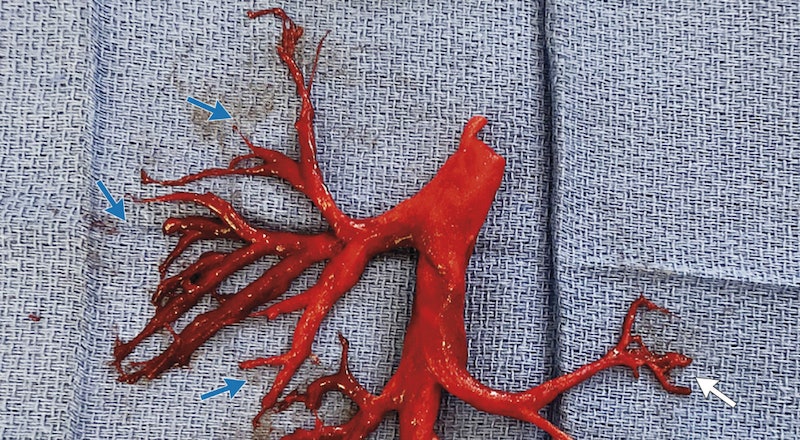 An amazing medical anomaly has garnered national attention after The New England Journal of Medicine tweeted a photo on Dec. 4 of a blood clot shaped like a bronchial tube. Unlike a typical amorphous blood clot, this image depicted something more akin to tree roots or sea coral, only a vivid a red. What’s more, doctors didn’t remove this six-inch-wide clot from the patient; the patient coughed it up in one piece.

Sadly, the patient involved in this case did not survive his illness. According to Gizmodo, the blood clot came from a 36-year-old man who had been suffering from chronic heart failure. The patient had been admitted to the intensive care unit, says Gizmodo, and was then hooked up to a pump designed to help circulate his blood throughout his entire body. Unfortunately, he died a week later due to complications of heart failure, Gizmodo reports.

But the patient’s death has left the medical community with a very rare medical case, the doctors who cared for the man told The Atlantic, because the clot essentially cast to a bronchial tube, and then was coughed up without breaking apart. The doctors say the device the patient was hooked up to caused blood to pool inside his lower right lung through a small fissure, says The Atlantic, where it started to clot despite the fact that the patient was taking anti-coagulants.

“We were astonished,” George Wieselthaler, a transplant and pulmonary surgeon at the University of California at San Francisco, told The Atlantic. “It’s a curiosity you can’t imagine — I mean, this is very, very, very rare.”

Doctors aren’t completely sure how the clot was able to make it out of the patient’s body intact, says Gizmodo. It’s possible an infection in the patient’s body caused a build up of fibrinogen, a protein in blood plasma that helps blood clots form, making the clot more rubbery, Gizmodo reports.

These kinds of clots are rare, but it’s not the first time it’s happened. In 2005, a 25-year-old pregnant woman coughed up a blood clot that was also a cast of a bronchial tree, according to the European Journal of Cardio-Thoracic Surgery. But in her case, she was able to recover fully and even delivered a healthy baby at full term. A case from 1926 was much more severe, according to JAMA. A 34-year-old woman coughed up a cast of her trachea, both bronchi, and several bronchioles, says JAMA, and died about 24 hours later.

In several news articles related to this story, you might've seen quotes in which the doctors say the patient had “no further episodes of hemoptysis.” According to Mayo Clinic, hemoptypsis means coughing up blood from some part of the lungs or respiratory tract. Coughing up blood isn’t always a sign of something super scary, says Mayo Clinic; it could be chronic bronchitis, chronic obstructive pulmonary disease (COPD), cystic fibrosis, a foreign body, pneumonia, or a blood clot. Mayo Clinic does recommend seeing a doctor if you are coughing up blood to find out exactly where the blood is coming from. Is it your stomach or your lungs? Is it trauma or an illness? A doctor can help you figure that out.

While this is an absolutely amazing medical case, it’s sad the patient didn’t survive to see the world in awe of what his body produced. The human body certainly is capable of unimaginably beautiful things.