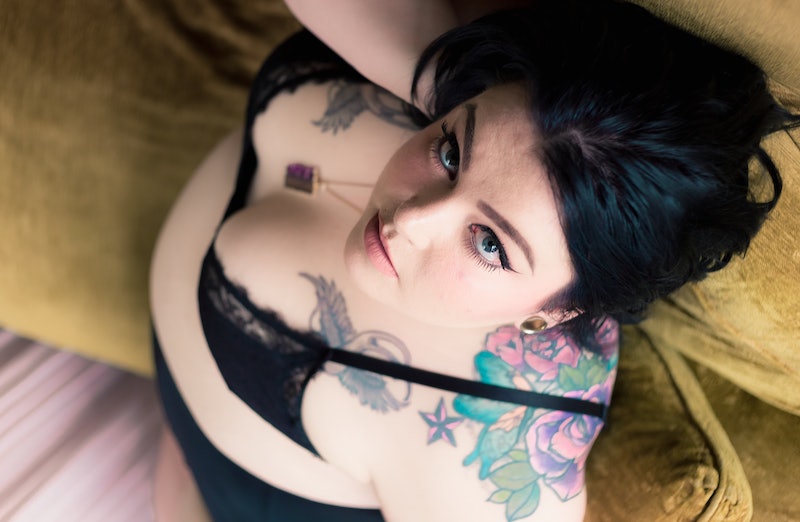 "Large breasts are still a very 'coveted' and fashionable thing," Nancy Whittington-Coates of Sugar Darling muses in an interview with Bustle. "They are also what a lot of people see as the redeeming feature of a fat woman and are integral to what many deem to be an 'acceptable fat' figure: One with big boobs, a small waist, and a plump bottom."

Although she's been fat her whole life, Whittington-Coates has never been "acceptably" fat. With "too many rolls, too cellulite covered thighs, too big a chin, and way too small boobs," she sometimes feels like her body is far removed from the images of mainstream plus size models one might find by searching Google: Perfect hourglasses with curves in the "right" places.

Though her breasts aren't the greatest body hangup she's ever contended with, other insecurities have started to fade after a lot of hard work. Finding self-love is almost always a lot of hard work, after all. It's largely the fact that it remains very difficult to find dresses that fit her bottom half perfectly without slipping off her chest that makes her covet larger boobs.

The alternative and vintage-inspired style blogger was actually eight years old the first time she experienced tangible body prejudice. It was during an acting class. Its theme was "animals" and the protagonists were meant to be a brave lion and a lethargic, simple-minded baboon. The boy chosen to play the lion volunteered Whittington-Coates for the latter role. "He looked me straight in the eye, pointed to me, and in front of the whole class and teacher said, 'She should be the baboon because she is big and fat and lazy like an ape.'"

But considering her parents, sister, and almost the entirety of her extended family have always been thin, and few of her classmates up until high school were anything but, her body's otherness was never not-obvious to her.

Depictions of beauty in artistic mediums undoubtedly contributed to Whittington-Coates' negative perception of her body, and her chest specifically, as well. "My parents both love fashion and the arts and so my childhood was fueled by movies and coffee table books where of course the thin glamorous woman is queen," she tells Bustle. "So this is what I saw as the ideal and always knew was not me," her lack of a full bust being one reason she arrived at this conclusion.

In watching Whittington-Coates disrobe for a photo shoot now, it seems difficult to believe that her breasts — or any part of her body — remain a hangup. There's something almost ethereal to the way she moves, a slight huskiness to her voice adding to the dream-like aesthetic. She has with her a light floral wrap that could easily be used to cover up certain parts of her body, or frame them in a more "flattering" light. Although she keeps it with her for a few shots, the blogger does not hesitate to discard it.

"I won’t lie. When I was walking to the bathroom to strip down to my undies it felt very surreal and there was a flutter of nerves," she tells Bustle. "I had brought a floaty cover-up with me mostly because I loved it but partly as a bit of covering if I felt I needed it, but when asked if I’d mind doing shots without it I felt no misgivings about throwing it aside." Although she describes her teenage self as "rebellious and ballsy," a younger Whittington-Coates wouldn't have felt able to pose in underwear, showing off the areas of her body she felt most vulnerable about.

"I used to hate photos of myself because all I could see were my 'flaws' next to everyone else looking fabulous," she adds. "But personally, I have found modeling invaluable to my self-esteem and appreciating parts of me that I disliked before."

It's been seeking out women with body types similar to her own that has made all the difference to Whittington-Coates. "I’m a very independent person, I like to think that all I need is my own pep talks," she says. "But boy is it wonderful to see someone like Cynthia Ramsay Noel (of Flight Of The Fat Girl) or model Megan Kimberling whose bodies are so similar to mine baring them so proudly online." Although one might argue that our body image or sense of self should not be dependent on others, there's a lot to be said for representation: For seeing people in a body like yours — a body you've long been told, directly or indirectly, is not good enough — living loudly and boldly and posting fatkini or midriff-exposing tops with no apology.

In fact, immersing herself in the fat positive community online has been vital for Whittington-Coates across the board. "I can give no better advice than to search out [fat positive people] and talk to them, even if that's just online," she says. "Let them be the cheerleaders in your head and use their articles and photos as inspiration. If you’re not comfortable talking, then just read their words and take them in fully."

The notion of engineering one's surrounding has also been a powerful tool. As individuals, we might not have the power to fully alter the mainstream imagery we're consuming. We cannot single handedly make it so that Hollywood directors begin casting more plus size women, including those whose bodies are boxy or flat-chested or lumpy rather than curvy. We as individuals cannot ban toxic weight loss advertising from morning TV.

But we can "stop reading articles that tell you that your self-worth is dictated by your clothes size or whether you have perfect skin or if your arm fat jiggles when you wave to your friends. [We can] mute those people who only post antagonistic statuses, stop buying magazines that body shame, and unfollow those diet accounts full of fat shaming before and after images and extreme detox plans. [We can] try to spend less and less time with people who make you feel any discomfort or shame or make you think that you deserve anything less than a full and happy life because you weigh more than the archaic BMI scale says you should."

We can shed the weight of the humans and institutions telling us that we must first change in order to be worthy of self-love. And toss that weight aside like the forgotten cover-up we once used to hide.