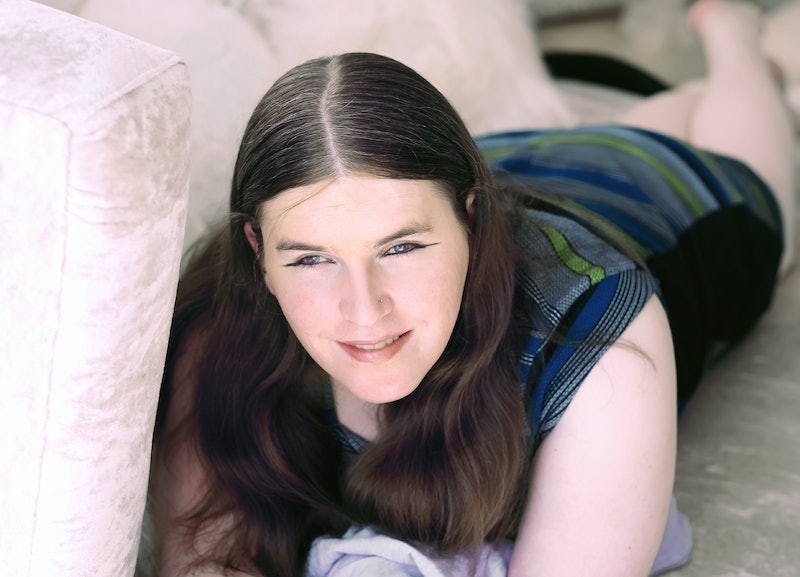 "This is going to sound a little up-myself but I'm generally in love with the shape of my body," Pipa Riggs tells me when she is first approached to model for A Body Project. "I have some stretch marks, [but] I've recently started loving them [...] I adore my eyes, although they're the thing that's most obviously 'broken.'"

As a 3-year-old, Riggs' eyesight was poor enough for her to be clinically registered as visually impaired. By six years old, in 1995, she was classed as blind. "Now my sight is extremely limited," she later tells Bustle in an interview. "I have virtually no functional sight in my right eye and very limited sight in my left. I can maybe see the shape of people and on a good day I may be able to guess the color of their top if they’re [close by] and the lighting is good."

Despite referring to herself as socially awkward, something she attributes to her eyesight, it soon becomes very clear that the camera loves Riggs. "I love attention," she later jokes. "Preferably positive [attention]." She would probably model regularly if there was more of a "demand for baggy, queer crips." For now, however, her blog and Twitter feed are largely dedicated to de-stigmatizing both of those characteristics.

Throughout conversations with Riggs, it often seems like her struggles with her eyes are less about her lack of sight and more about people's perceptions of her lack of sight and the appearance of her eyes in general. At nine months old, for example, she underwent surgery for a squint. "If I had any functional sight in my right eye, this would [have] probably made it useful," she says. But "the surgery [was] for all intent and purposes a cosmetic one [...] Since I've never known any different with regards to having functional sight in my right eye, it has felt like a cosmetic procedure all my life. [It's] weird knowing that people see part of your body as an anomaly."

Her right eye also happens to wander, turning in whichever direction it fancies going. "It's really frustrating when medics ask you to look in a certain direction and you have to repeatedly explain [that] it does whatever it likes and I've no control over it," she muses. "One nurse wouldn't stop [asking], to the point where I was nearly crying and this was after I told her no more."

Before coming out as gender nonconforming, Riggs was also limited by what she calls the "do it yourself" attitude that seems to come with assuming a masculine identity, lest you want to be perceived as fragile that is. "Now, I feel that I can ask for help without being seen as 'weak,'" she tells Bustle. "[Transitioning] has allowed me to be more vulnerable."

That vulnerability can manifest in asking others to serve as "talking mirrors" of sorts, guiding her if ever she needs to know whether her makeup is blended properly or if her hair is neatly arranged. But this also requires a certain level of trust. "Trusting other people is really difficult," she adds. "And has been more difficult of late when I've been strangely misgendered."

Defusing any body hate (or eye-specific hate) that may arise as a result of outside forces often comes down to "realizing that all people have different eyesight, eye shape, and color." But Riggs also has lizards and Harry Potter to thank for her tangible self-acceptance. "I learned that geckos move their eyes separately, which is both cool and it means if I'm a 'freak' then that whole species is, too... no offense to any geckos," she jokes. "Mad-Eye Moody from Harry Potter also made me feel quite cool. You can buy a cloak and a wand, but I've got the original magic eye!"

All that said, Riggs also thinks it's critical to "allow yourself some space to dislike or hate parts of your body" from time to time. As long as you also give yourself space to question why it is that you're feeling this way in the first place. "When you're hating on whatever, ask why. If it's because it doesn't fit with what you want, fair enough," she says. "However, if it doesn't fit in with what you see in the media, then look at (or ask) what the actual real people on the street look like. The people that we blend in with everyday or try to. Being an individual is not having the 'perfect' figure, because that's what the media and everyone else is about, but having an individual body and rocking it like a neon orange pair of jeans."

In Riggs' case, photos are not only essential for allowing her to see her eyes as something beautiful, but to literally help her see herself altogether. "If I want to see myself, I have to take selfies," she says, which she can then look at with the help of a magnifier. "My biggest fear, which is vane as hell, is for me to lose all my sight and not to be able to see myself. This would mean leaving my self-image to whoever is my talking mirror."

It isn't vane, though. Cultivating positive self-image, whatever that means to you, never is.

If you have to be vulnerable sometimes in order to get there, that's OK, too. "There was one pose, I can't remember exactly which, but it was outside and I was eating [or] smelling a flower looking up at the camera," Riggs muses, reflecting on her photo shoot. "This pose made me feel really vulnerable, not unsafe [...] It felt like any mask slipped off and I was being 100 percent me."

And perhaps that's what the whole self-love thing comes down to. Allowing yourself to be 100 percent, well, yourself — even if you need people's help along the way.

More like this
Instagram & Facebook May Finally Lift Their Notorious Nudity Ban
By Allie Fasanella
Selena Gomez Dismissed Trolls' Comments About Her Body After The Golden Globes
By Stephanie Topacio Long
The Case For Using Your Fanciest Beauty Products Every Single Day
By Carolyn Steber
Wavy Hair Girlies Rejoice, Rhyme & Reason’s Wave Revival Regime Is Here
By Darshita Goyal
Get Even More From Bustle — Sign Up For The Newsletter
From hair trends to relationship advice, our daily newsletter has everything you need to sound like a person who’s on TikTok, even if you aren’t.