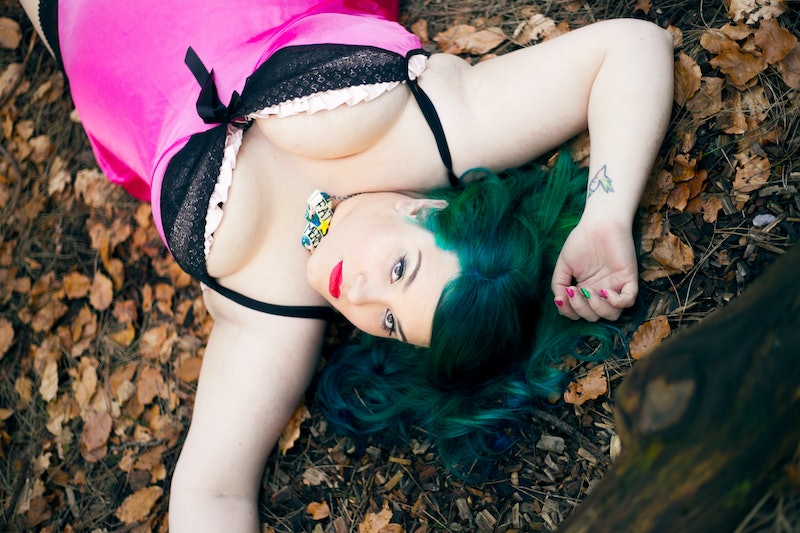 With award-winning photographer Substantia Jones of The Adipositivity Project and Manchester-based photographer Paddy McClave, Bustle presents A Body Project. A Body Project aims to shed light on the reality that "body positivity" is not a button that, once pressed, will free an individual from being influenced or judged by toxic societal beauty standards. Even the most confident of humans has at least one body part that they struggle with. By bringing together self-identified body positive advocates, all of whom have experienced marginalization for their weight, race, gender identity, disability, sexuality, or otherwise, we hope to remind folks that it's OK to not feel confident 100 percent of the time, about 100 percent of your body. But that's no reason to stop trying.

When Sarah Martindale was in her mid 20s, she began experiencing immobilizing lower back pain. Despite self-identifying as a body positive feminist, she noticed that the deterioration of her joints seemed to coincide with going up a few dress sizes. A lifetime of anti-fat messaging began to seep in, and she blamed the aches and pains in her body on her size.

"I was taught from a young age that fat is bad," she tells Bustle. "My mum was always considered 'overweight' or 'obese' and has battled with diets my entire life." As a small child, Martindale remembers another older relative encouraging her to suck in her tummy. "No one wants to see that," they said.

The fatphobia she was exposed to didn't stop the older, and larger, she got. Far from it. "There is a huge amount of information out there, coming at us from all sides, telling us that we are not good enough," she says. "The media does it constantly, [...] the medical profession is largely uninterested in finding the true cause of our problems, and this spills over into family and friends who 'just want what's best for you.'"

Although the first doctor Martindale saw for her pain quickly recommended weight loss, she was eventually referred to a physiotherapist who determined the real cause of the problem: hypermobility syndrome. To be hypermobile is to have a wider range of movement in the joints throughout your body than what is considered average. Although the condition can lead to increased flexibility (and is commonly beneficial to dancers and gymnasts), downsides include weakness in the joints since more muscle is required to support them. Sprains and dislocation are pretty common, too, as is pain throughout the knees, fingers, hips, and elbows.

Looking back on it now, the diagnosis is one that essentially confirmed that Martindale's size wasn't responsible for her discomfort. At the time, however, she still couldn't help but correlate her weight to her limitations. "When my hypermobility syndrome was at its worst, I really struggled with a feeling of failure, that my body had let me down and that it was because I had 'let myself go,'" she tells Bustle. "As a body pos woman, I [...] felt so much guilt for feeling that way."

Martindale feels that separating her weight from her condition was further complicated by outside perceptions of her body. Her fat wasn't the thing that was making it difficult to walk to the park, but no one else would believe that.

"One difficult part was that when people saw me struggling when I was in public — when I would have to stop every few minutes to rest — I always felt that they assumed I was stopping because I was fat and therefore unfit," she says. "So there is a crossover there between what is actually happening internally and the external appearance. I have worked hard to stop caring about the way others perceive me, but there is definitely a psychological impact from this kind of thing if you allow it to affect you."

Given Martindale was an active participant in body positive and fat positive activism, she knew logically that fat does not have to mean unfit, and, perhaps more importantly, that being unfit or unhealthy (regardless of one's size) does not equal being reprehensible. But a lack of resources within the size acceptance community for her particular situation (something so internal and unseen) made it even more difficult to apply the concepts she so believed in to her own life.

Thankfully, she found support groups and charities that helped people with hypermobility syndrome. "When I was struggling to walk because my muscles around my spine were weak, I looked to those groups for comfort and camaraderie," she notes.

In time, she also began to make simple changes to her day-to-day routine in the aid of decreasing her pain. Finding a suitable desk chair, for example, was a small change that made a massive difference. "Recognizing and accepting my limitations" has been the greatest turning point for Martindale. "For example, I know that if I sit for a long time without support for my lower back, I will suffer for it. I know now that if I seek out a suitable chair or find a way to support my back with a pillow, it won't hurt. I know that my weakened ankles don't allow me to walk in heels, as much as I would like to. If I don't put myself in these positions, then I am not setting myself up to fail. I have realistic expectations of my body now and it has made an enormous difference, taking away that layer of disappointment or feeling of failure."

Too often, particularly as fat people, we are made to feel like failures if our bodies have different needs to those of our thin counterparts. Whether we need a chair without arms in order to sit comfortably, or we can't find a dress that fits at a clothing store, the blame is so regularly placed on our bodies and the "inconveniences" they cause. It's easy to fall into the trap of placing the blame on ourselves, and our size, rather than on the mentalities that lead to weight bias and body shaming.

When Martindale began doing that, she stopped blaming her fatness for a medical condition beyond her control. One that, in reality, she'd had since childhood. She remembers bending further and more easily than her peers in PE, so she knows her hypermobility wasn't a product of weight gain.

"Right now, hypermobility is something I live with quite comfortably," she adds. "I have learned how not to piss my body off and it in turn doesn't piss me off. I have no doubt that I will struggle if and when the syndrome flares up again, but for the time being, we are co-habitating quite successfully."

In the end, she didn't have to lose any weight in order for that to happen.

More like this
Instagram & Facebook May Finally Lift Their Notorious Nudity Ban
By Allie Fasanella
Selena Gomez Dismissed Trolls' Comments About Her Body After The Golden Globes
By Stephanie Topacio Long
6 Asian Beauty Rituals That Will Soothe Your Skin, Scalp & Mind
By Jennifer Li
15 Vegan Makeup Brands To Shop For Cruelty-Free Glam
By Audrey Noble
Get Even More From Bustle — Sign Up For The Newsletter
From hair trends to relationship advice, our daily newsletter has everything you need to sound like a person who’s on TikTok, even if you aren’t.