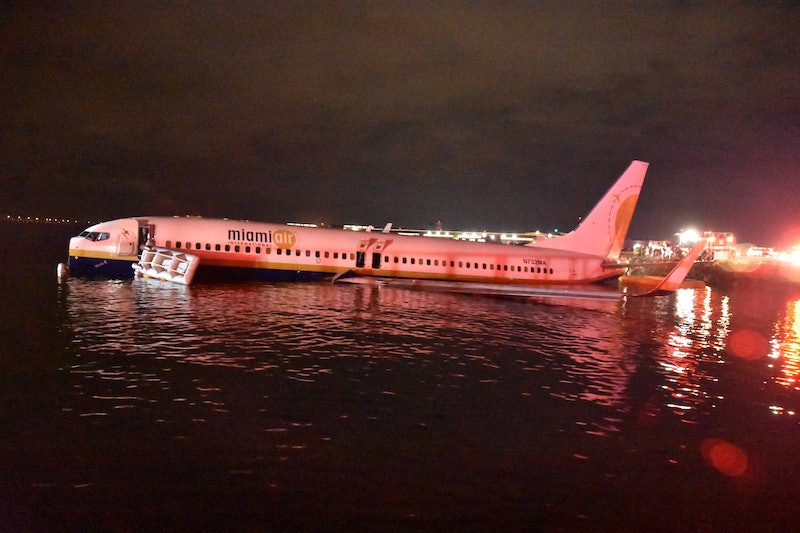 A plane being chartered by the U.S. military from a naval station in Guantanamo Bay, Cuba, skidded off the runway at the naval air station in Jacksonville, Florida, before landing in the St. Johns River late Friday. Although no fatalities or critical injuries have been reported, federal officials are investigating as a Boeing 737-800 was involved.

According to the National Transportation Safety Board, a 16-person "Go Team" arrived to investigate the crash in Jacksonville on Saturday. "The NTSB is investigating the runway overrun of a Miami Air International Boeing 737-800 that overran the runway at NAS Jacksonville and came to rest in the St. Johns River in Jacksonville, Florida, on Friday," the agency said in a statement shared on Twitter.

In a statement released late Friday, Naval Air Station Jacksonville said there had been 136 passengers and seven crew members on board, all of whom had been accounted for after the incident. According to NPR, 21 adults were treated for minor injuries sustained in the incident at local hospitals.

According to Vox, the plane is part of charter airline Miami Air International's fleet of Boeing 737-800s, a model different from the 737 MAX 8 aircraft which was grounded earlier this year after two fatal crashes. A spokesperson for Navy Region Southeast told ABC News the military has a contract with the charter airline for twice-weekly "rotator" service between the base in Guantanamo Bay and the U.S. mainland. Passengers eligible to fly via the "rotator" service include military personnel and their families as well as civilian employees and contractors stationed or working at the Guantanamo base.

In a statement shared on Twitter, Boeing said it was aware of the incident and was gathering information. "Boeing extends its well wishes to all those involved as 136 passengers and seven crew were reported on board," a follow-up statement from the company read. "Boeing is providing technical assistance at the request and under the direction of the U.S. National Transportation Safety Board (NTSB) as the agency conducts its investigation." Bustle has reached out to Boeing for additional comment.

According to NPR, officials told reporters that it remained unclear what had caused the plane to skid off the runway. A passenger traveling on the plane at the time of the incident told CNN the plane "literally hit the ground and then it bounced" during landing. "It was clear that the pilot did not have complete control of the plane because it bounced some more, it swerved and tilted left and right," the cable news outlet reported passenger and civilian defense attorney Cheryl Bormann said. "The pilot was trying to control it but couldn't, and then all of a sudden it smashed into something."

Bormann told CNN the plane's crew was quick to direct passengers in emergency landing procedures, ushering them onto one of the plane's wings and then into a raft in the water.

"I think it is a miracle," The New York Times reported Naval Air Station Jacksonville's commanding officer, Capt. Michael P. Connor, told reporters of the incident during a press conference Saturday. "We could be talking about a different story."