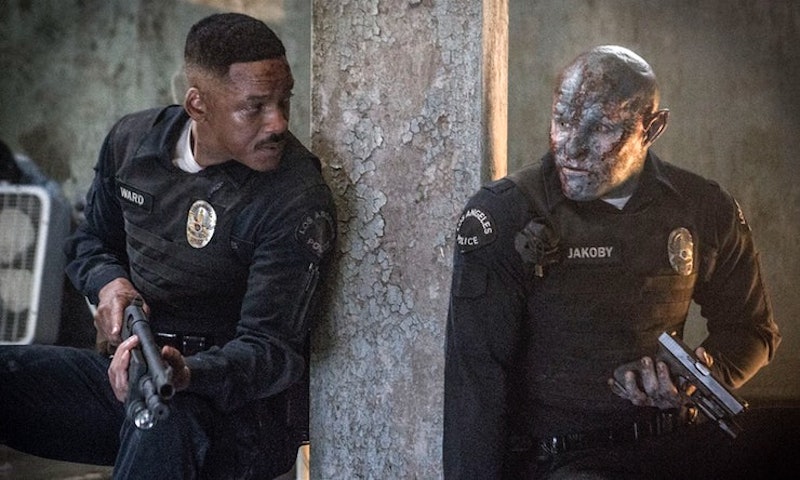 If you haven't heard of Bright, Netflix's big-budget studio-without-a-studio film released straight to streaming, it can be neatly summed up by the name that made the rounds on Twitter: The Orc Cop Movie. Said orc cop (Joel Edgerton) is partnered with Will Smith as Ward, orc-racist and also a cop, to patrol the streets of a universe where fantastic creatures live alongside humans. If you're already curious about the world of Bright, you're in luck — a Bright sequel is already in the works.

If you feel like you haven't been able to go on Netflix without seeing the movie's ads plastered all over, that's exactly the point. To promote their expensive new movie, the streaming service didn't treat it like a regular studio picture. Instead, Netflix VP of product innovation Chris Jaffe told Fast Company, “We’ve found the most effective way to drive viewing is on the service.” That meant most of their efforts went towards data crunching the viewing habits of Netflix's over 100 million users to figure out who would most want to watch Bright. According to Fast Company, Netflix's algorithm checked over 100 factors on a 24-to-eight-hour basis for individual viewers, determining who saw promotional spots for the film. Pretty cool, huh?

And the in-house promotion won't stop with Bright's release. As Jaffe said, "It doesn’t matter that Bright is launching in 2017. That premiere experience will happen for years.” Netflix will continue tweaking and honing the experience with customized artwork and ads angled specifically for different user tastes, taking in more user information and feedback as they go, and targeting new users as they roll in.

Whatever else, Netflix seems extremely confident their gamble will pay off, or at least have money to burn — Bloomberg not only confirmed two days before Bright's release that Netflix had already locked Smith in for a sequel, but that the service was spending approximately two billion dollars on creating new content, with over 80 films slated for production. The majority of the films will be low- and mid-budget, but a few will be the blockbuster-scale size of Bright, including, one can assume, its sequel.

While the only firm intel is that Smith is locked to come back, Bright director David Ayer, also the man behind polarizing big-budget action film Suicide Squad, told Thrillist, "I wouldn’t hate making another one!" No word yet on whether writer Max Landis, who reportedly got $3.5 million for penning the original, will return to write a sequel, especially considering how controversial he is. No matter who comes back, you can be sure that the sequel will be as explosive as the first movie, and probably as divisive. Bright currently has a 28% Fresh rating on Rotten Tomatoes, and many people have had thoughts on the widely-seen film.

As for the plot itself? Speculations run rampant, but (spoilers ahead) near the end of the film, Smith's character Ward touches a magic wand without exploding, revealing him as the one-in-a-million human Bright (a character who can manipulate magic). He and his partner cover up the multiple deaths Ward caused with the wand, blaming it on gangsters to hide Ward's true identity. With that reveal left wide open, Bright's sequel will likely focus on the ramifications of Ward's newfound powers, as well as continue with the original's attempt to stop the resurrection of the Dark Lord.

In any case, the sequel is slated as part of 2018's Netflix boom, and with its star-power assured, we'll be hearing more about Bright 2 soon enough.