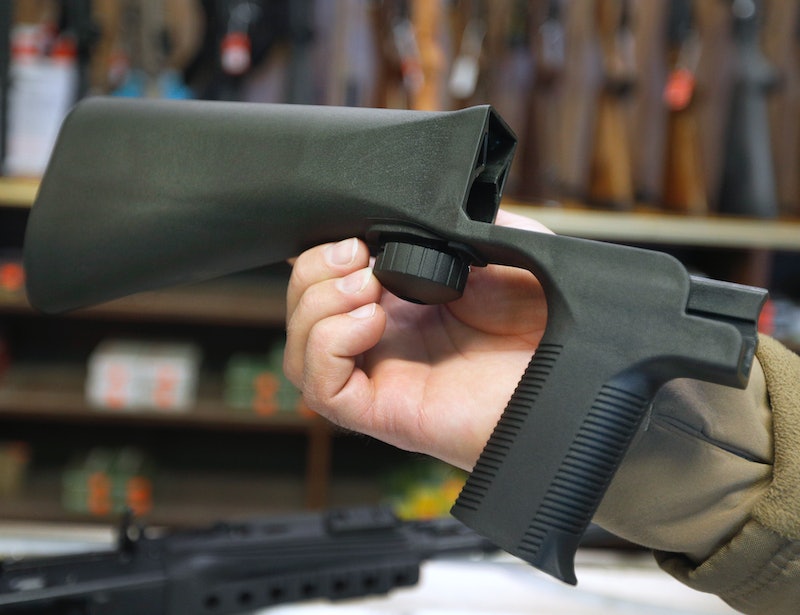 The Justice Department announced Tuesday that bump stocks have been banned. The controversial handgun accessory, which allows shooters to fire bullets from semi-automatic weapons faster than would normally be possible, drew national scrutiny after they were used to kill 59 people in Las Vegas in 2017. Under the new ruling from the Trump administration, bump stocks will be illegal to possess 90 days from when the regulation is formally published, which CNN reports will likely be Friday.

In announcing the new policy, the Justice Department said that because bump stocks "allow a shooter of a semiautomatic firearm to initiate a continuous firing cycle with a single pull of the trigger," they qualify as "machineguns" — which are illegal — under existing law.

"A semiautomatic firearm to which a bump-stock-type device is attached is able to produce automatic fire with a single pull of the trigger," the Bureau of Alcohol, Tobacco and Firearms, a division of the DOJ, wrote in its new ruling. "With limited exceptions, the Gun Control Act [of 1968] makes it unlawful for any person to transfer or possess a machinegun unless it was lawfully possessed prior to the effective date of the statute. The bumpstock-type devices covered by this final rule were not in existence prior to the effective date of the statute, and therefore will be prohibited when this rule becomes effective."

Owners of bump stocks will have 90 days from when the regulation is published in the federal register — probably Friday, according to CNN — to either turn in their bump stocks to a local ATF office or destroy them. The ban could be subject to legal action from gun rights organizations, which have long warned against the specter of the federal government forcing Americans to hand over their firearms; however, no such action has yet been announced.

In a statement to Bustle, the National Rifle Association said it was "disappointed" in the ruling and suggested that it was unfair to Americans who had already bought bump stocks.

"We are disappointed that this final rule fails to address the thousands of law-abiding Americans who relied on prior ATF determinations when lawfully acquiring these device," the NRA said in its statement. "As we recommended to ATF in our comments on the proposed rule, Congress made it possible for the Attorney General to provide amnesty for firearms regulated under the National Firearms Act. The Attorney General should have exercised that authority to provide a period of amnesty under this rule.”

After the Las Vegas shooting, the NRA said in a a statement that "devices designed to allow semi-automatic rifles to function like fully-automatic rifles should be subject to additional regulations," and called on the Justice Department to "immediately review whether [bump stocks] comply with federal law." However, it didn't call for them to be banned entirely.

President Trump announced his intent to ban bump stocks earlier in the year, and in March, then-Attorney General Jeff Sessions announced a proposed rule similar to the one that was unveiled on Tuesday.

The final regulation was signed by acting Attorney General Matt Whitaker, Sessions' former chief of staff. Whitaker assumed office without Senate confirmation after Sessions resigned in November; many legal experts have argued that this was unconstitutional, and there are several lawsuits challenging the legality of Whitaker's appointment and office-holding.