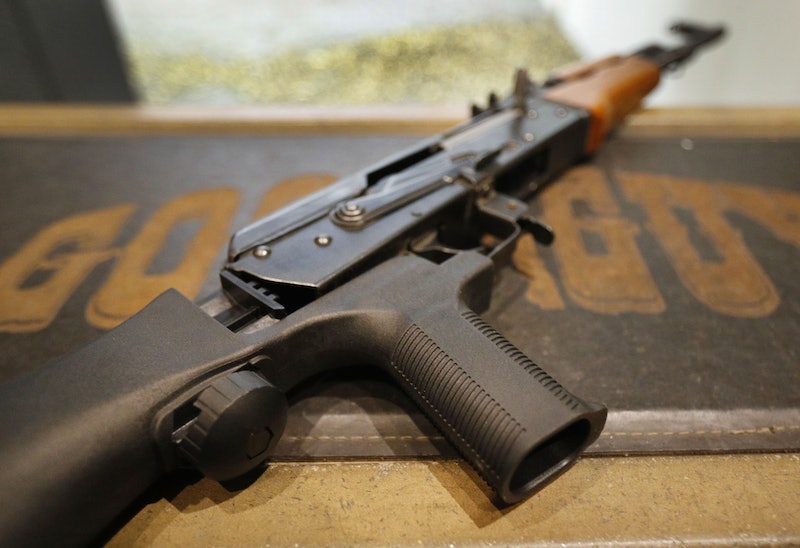 Despite opposition from some lawmakers and the National Rifle Association, the Trump administration is reportedly set to enact a federal bump stock ban. The administration initially promised the ban following the October 2017 shooting at a country music festival in Las Vegas, which killed 58 people and injured over 500.

It was the deadliest shooting in American history, in part because the gunman used bump stocks, attachments placed on semi-automatic weapons to allow them to fire more rapidly, kind of like they are fully automatic. Under the Obama administration, bump stocks were categorized as firearm accessories, and therefore not subject to federal regulation. But earlier this year, at President Trump's direction, the Department of Justice (DOJ) released a proposal to classify bump stocks within the federal regulations for machine guns. As such, if the ban holds up, anyone in possession of "'bump fire' stocks, slide-fire devices, and devices with certain similar characteristics," will be given 90 days to turn in or destroy their devices.

"Bump stocks turn semiautomatic guns into illegal machine guns," a DOJ official told CNN on Wednesday. "This final rule sends a clear message: Illegal guns have no place in a law-and-order society, and we will continue to vigorously enforce the law to keep these illegal weapons off the street."

The president again signaled a move to eliminate bump stocks after the Parkland shooting in February, although that massacre — which resulted in the death of 17 students and teachers — did not involve bump stocks. The Bureau of Alcohol, Tobacco, Firearms, and Explosives (ATF), a part of DOJ, has flip-flopped on whether or not it has the power to regulate bump stocks without authorization from Congress, but now appears ready to enforce a ban.

However, if it's enacted, the ban will almost certainly be met with legal challenges from gun rights advocates and Republican lawmakers. Sen. Dianne Feinstein, who co-authored a bill to ban bump stocks and assault-style weapons after the Las Vegas shooting, has also warned against inevitable legal battles over a ban implemented by DOJ, and argued in favor of congressional action instead. "The fact that ATF said as recently as April 2017 that it lacks this authority gives the gun lobby and its allies even more reason to file a lawsuit to block the regulations," she said in a statement in March.

Even if the ban goes through, there's evidence to suggest that it might not do a whole lot to prevent gun violence on a large scale. Center for Disease Control data shows that only 2 percent of gun deaths in America come from mass shootings — on top of that, according to Mother Jones, most mass shooters don't use bump stocks. A study from Harvard's School of Public Health found that homicide is actually more directly related to gun ownership — basically, where in communities with more guns, there's more gun violence.

The ATF bump stock ban would also leave out other modifications that make semi-automatic weapons more deadly, like trigger cranks. But gun reform advocates say the enforcing the ban through DOJ — instead of a comprehensive bill like Feinstein's — might be what lawmakers loyal to the gun lobby want. “Vegas was the 9-11 of gun crimes, and you would have expected there would be swift action, but there wasn’t,” David Chipman, a senior policy adviser at Giffords, a gun reform organization, told Mother Jones. "This whole process is going on so members of Congress don’t have to be on the record taking action."