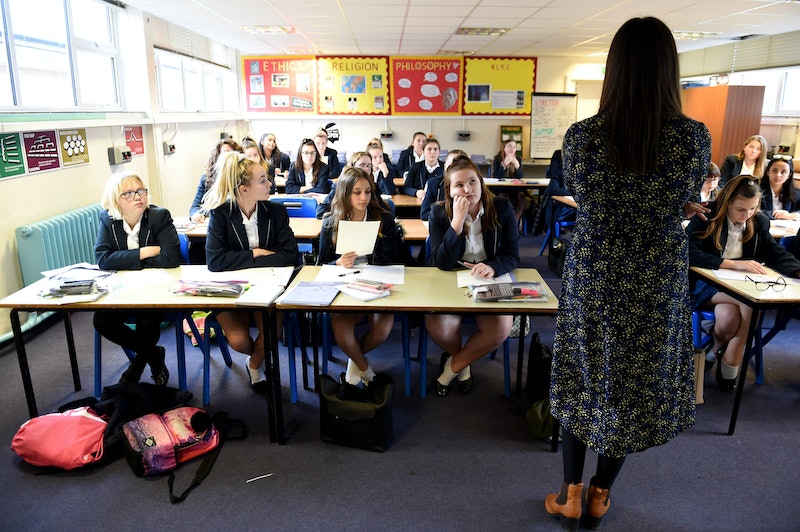 A decades-old state law is forcing a California teacher to pay for her own substitute teacher as she's fighting cancer, KGO, an ABC-owned station in San Francisco, reports. The incident has caused outrage among parents at Glen Park Elementary School, and is drawing new scrutiny to the Golden State's education code.

The second-grade teacher, who requested that news organizations not identify her, is on medical leave for the rest of the school year as she battles breast cancer, the San Francisco Chronicle reports. During that time, the cost of hiring a substitute teacher to fill her shoes will be deducted from her salary.

San Francisco United School District spokeswoman Laura Dudnick tells CNN that in San Francisco, the average cost of a substitute teacher is $203.16 per day — and stressed that the teacher's predicament is the result of state law, not the city's policy.

“This is not unique to San Francisco,” Dudnick told CNN. “This is not a district-only rule.”

San Francisco gives teachers 10 days of paid sick leave every year, according to KGO. Under a 1976 California law, teachers who exceed their allotted sick leave may take up to 100 days of extended medical leave — but only if they pay for the wages of the substitute teacher who fills their place.

As the Chronicle reports, California teachers do not pay into the state's disability insurance program, so they can't draw from it. And although it may seem outlandish, a provision in the 1976 law allows school districts to deduct the cost of hiring a substitute teacher from a full-time teacher's paycheck even if no substitute is actually hired.

“Parents were outraged and incredulous — like, this can’t be,” Amanda Fried, whose daughter attends Glen Park Elementary, told the Chronicle. “There must be some mistake.”

The president of a local teacher's union told CNN that when it comes time negotiate contracts next year, her union will seek to make improvements regarding the city's policies on catastrophic and extended sick leave.

"The issues involving teachers' use of extended sick leave and the catastrophic sick leave bank, as well as the school district's use of a daily substitute dock rate, are governed by law and the collective bargaining agreement," Susan Solomon, president of United Educators of San Francisco said in a statement to CNN. "UESF is consulting with our members on their priorities for contract negotiations next year. As always, we look forward to making improvements in this and other parts of the contract."

A GoFundMe page has raised over $13,000 to pay for the teacher's medical expenses, but it's no longer accepting donations, BuzzFeed News reports.

Fried told the Chronicle that, although parents at Glen Park Elementary were incredulous after learning of the state's extended sick leave policy, many teachers at the school were not.

“The teachers have sort of shrugged — like, yes, that’s how it is,” Fried said. “That makes it even more sad, because teachers expect to be treated poorly.”