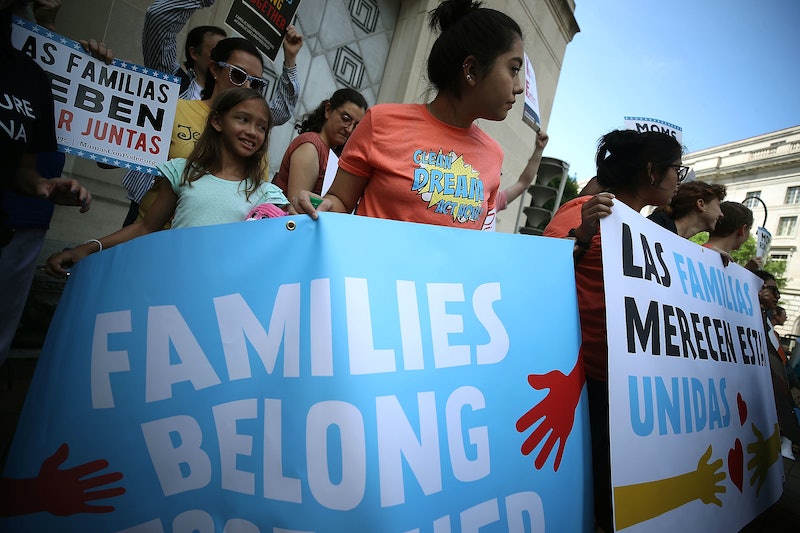 Upon first glance, the descriptions sound like scenes from a dystopian novel. But these were the apparent conditions of migrant children in "Casa Padre," a Walmart-turned-detention center, as reported by several media institutions' reporters on Wednesday.

A small group of journalists for the New York Times, Washington Post, MSNBC, and the Wall Street Journal were given access into a former Walmart super-center in Brownsville, Texas. About 1,500 migrant boys are reportedly living there. The Post reported that the "Casa Padre" sign has replaced Walmart's logo.

The detention center is currently being run by Southwest Key Programs under a federal contract. Its president Juan Sanchez told The Journal, "You’re going to see a lot of kids. This has been a time of getting a lot of kids really fast."

It's a move that the current administration has expressed no guilt over. A spokesman for the Department of Health and Human Services (HHS), Kenneth Wolfe, justified the detention center to The Journal, "HHS is legally required to provide care and shelter for all unaccompanied alien children referred by [Department of Homeland Security], and works in close coordination with DHS on the security and safety of the children and community"

According to The Post, the ex-Walmart center now has classrooms as well as "recreation centers" for the children who entered the United States with their parents by crossing the southern border. The children had been forcibly separated from their mothers and fathers under President Donald Trump's "zero tolerance" anti-immigration stance.

MSNBC correspondent Jacob Soboroff told his network that the children were "effectively" incarcerated in the center where they follow strict routines. According to The Journal, children are given only two hour breaks outside where they can play basketball and volleyball. But that's about it.

"The boys’ nearly every movement is monitored by staff members," The Journal reported on Wednesday. In comments to the publication, HHS figures said that their department is considering building detention facilities for immigrant children in military bases.

Such intentions sound similar to reports of Trump's administration eyeing the option of building "tent cities" for young immigrant children. It's hard to see how such developments will take place without severe criticism from observers.

As it stands, the ex-Walmart detention center is already being condemned for its controversial nature. Dona Abbott, who directs the refugee program for Bethany Christian Services, warned The Journal about the psychological ramifications of forcing children away from their parents. "We really believe children best cared for in their family," she said.

Of course, after reading such reports, many must have wondered where the children's parents are at the moment. As a result of crossing the American border, dozens of parents of the immigrant children await to hear about their fate in federal prisons. For some, it may take up to six months to be released. In the meantime, their young ones wait in the detention center.

It almost sounds like a lucrative business opportunity for Sanchez's Southwest Key Programs. At this moment, his program is looking to expand hosting capabilities, such as placing more beds, at the existing 27 facilities in states like Arizona and California. This would be, obviously, to create more detention space for the immigrant children.

The young ones, including preteens, are given fruit cups and mixed vegetables at meals, according to The Journal. Surrounding them are staff members who monitor their activities as well as murals of the current president and his predecessors.

A prominent mural in the detention center for Trump depicts a strange quote that the children see pretty much everyday. "Sometimes by losing a battle, you find a new way to win the war," it says. It turns out to be a sentence from his book, The Art of the Deal, on page 249. The book was ghostwritten by Tony Schwarz who, now, "deeply, painfully" regrets writing it for the president.

More like this
Why Eurovision 2023's Host City Won’t Be Revealed For A While Yet
By Sam Ramsden and Rachel Mantock
25 Things I've Reduced My Life To, In Addition To WFH In My PJs
By Ginny Hogan
7 Things We Learned From Rebekah Vardy's First Post-WAGatha Christie Interview
By Sam Ramsden
What We Know About Where Caroline Watt Is Now
By Catharina Cheung
Get Even More From Bustle — Sign Up For The Newsletter