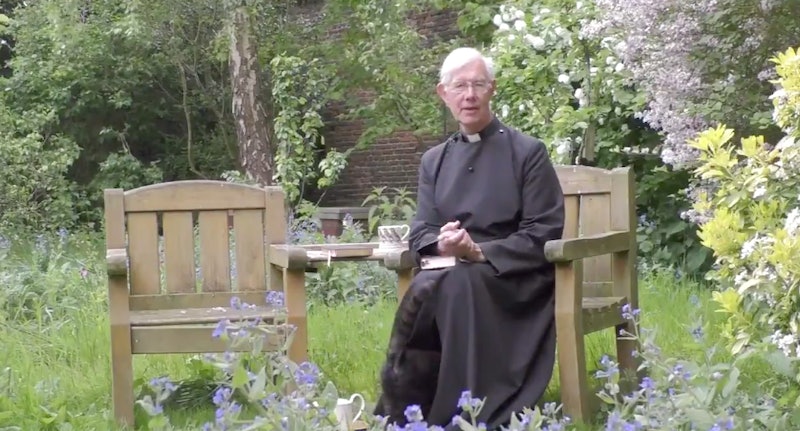 No, this isn't a crude punchline in a Carry On film; this is 2020 and any feline caretaker who's tried to do anything on video throughout the coronavirus crisis will tell you, they ain't camera shy. The video of a cat disappearing under the Dean of Canterbury's robes is not only hilarious, but also so so relatable for anyone who cohabits with a cat.

The video shows the Dean of Canterbury, the Very Rev. Robert Willis, speaking to his flock in somber tones and dressed in the formal attire befitting a man of the cloth. The dean is sitting on a chair during his daily broadcast of morning prayer from the gardens of Canterbury Cathedral. It's a nice summery and picturesque scene and all's well until one of the dean's four cats, Leo, comes into shot. He confidently slinks towards the dean, his tail swaying from side to side, and disappears under the clergyman's black robes, proving that he's just as disrespectful of personal space as your average moggie.

Judging by how much cats love to chill under the clothes horse, these robes might well be the dreamiest place for one to hang out. The combination of the bold as brass Leo and the dean acting as if absolutely nothing is going on makes for a perfect viral video.

Seemingly Leo is the most fame hungry of the reverend's kitty quartet. So much so that ITV reports officials at Canterbury Cathedral said of the videos, "whilst he would be happy to be in every one, we have tried to include the others to prevent them getting jealous."

The incident has, of course, inspired plenty of memes. People wondered what would happen if the vicar's cat met other high-profile felines.

Others made the connection that Canterbury is also for being to location of some well-known tales/tails.

All jokes aside, if you look a little bit closer though, as some have pointed out, you might well wonder where the heck that cat has actually gone.

Maybe it's a portal to a far better place.

Now that's a world I'd like to live in.

More like this
Forestcore Is About To Take Over Your TikTok FYP
By Sam Ramsden
Pret & Costa’s Coffee Is The Strongest On The High Street, According To Which?
By Sam Ramsden
Here’s What TikTok's "Mascara” Trend Is *Really* About
By El Hunt
Matt Hancock’s TikTok Is The Most Matt Hancock Thing Ever
By Sam Ramsden
Get The Very Best Of Bustle/UK
Sign up for Bustle UK's twice-weekly newsletter, featuring the latest must-watch TV, moving personal stories, and expert advice on the hottest viral buys.