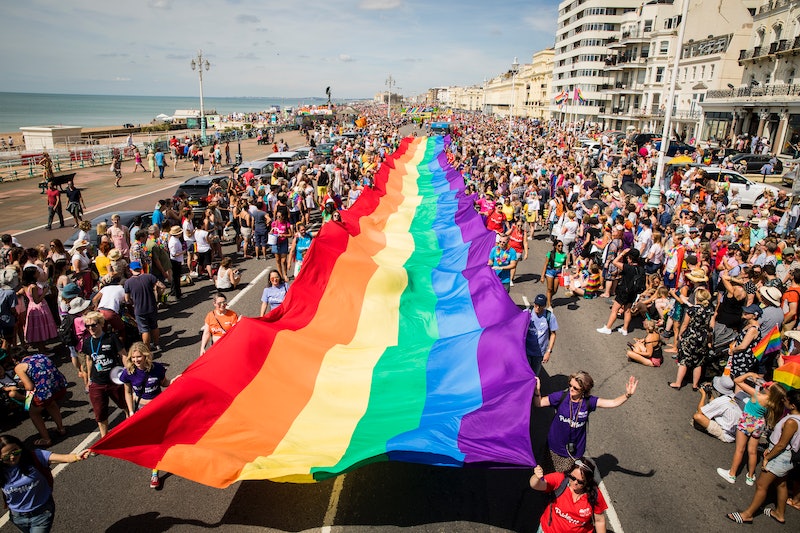 A clergyman from Rhode Island is facing major criticism this weekend, after he shared an inflammatory instruction for his fellow Catholics. Thomas Tobin, a Catholic Bishop, said Pride Month events are harmful to children, and discouraged other members of the church from attending them. His remarks went viral, and Twitter pushed back against them — voraciously.

"A reminder that Catholics should not support or attend LGBTQ 'Pride Month' events held in June," Tobin tweeted on Saturday. "They promote a culture and encourage activities that are contrary to Catholic faith and morals. They are especially harmful for children."

Many of the responses to Tobin's tweet expressed astonishment about his claim, given the Catholic churches well-documented problems with sexual abuse. They also pointed out that Pope Francis has been more open to the LGBTQ community than other Catholic leaders have historically been. A lot of those who pushed back against Tobin also self-identified as Catholics. Bustle has reached out to the Diocese of Providence for comment.

"This practicing Catholic will be supporting and attending LGBTQ Pride events," tweeted The View co-host Sunny Hostin. "And so will my Catholic children. You should be ashamed @ThomasJTobin1."

Actress Mia Farrow also had a lot to say in response to Tobin, remarking that "kids are in far more danger at a catholic church than at a gay pride gathering."

"Of COURSE we should embrace our LGBTQ brothers and sisters and children," Farrow wrote. "Jesus spoke of love."

Tobin received criticism from a lot of public figures, including actresses, activists, and writers. And many echoed similar sentiments — and some implored him to think of the consequences of his words.

"Shame on you," wrote Patricia Arquette. "LGBT kids are thrown out on the streets and abandoned because of poisonous thinking like yours."

Even some politicians chimed in, arguing that sentiments like Tobin's could be used to justify "conversion therapy." (Colorado, for reference, just banned such "therapy" for minors, per ABC News.)

"Hey @ThomasJTobin1 of the Catholic Church: I'm Catholic & I don't remember Jesus saying anything about LGBTQ. But I do remember Christ teaching about love," wrote Rep. Ted Lieu. "And your asinine remark about children is exactly the type of bigoted belief that leads to the evil of conversion therapy."

Tobin's tweet was sent on June 1, the official start of Pride Month. The occasion is marked by a multitude of events, including parades and marches. In a statement reported on by NBC 10, a local Massachusetts affiliate, Tobin said that he regrets the controversy that ensued after he posted his tweet.

“I regret that my comments yesterday about Pride Month have turned out to be so controversial in our community, and offensive to some, especially the gay community," Tobin said. "That certainly was not my intention, but I understand why a good number of individuals have taken offense."

Although he noted that "individuals with same-sex attraction are beloved children of God and our brothers and sisters," Tobin did not explicitly apologize for his remarks. Criticism continued to pour in on Twitter, even after his statement began to circulate.