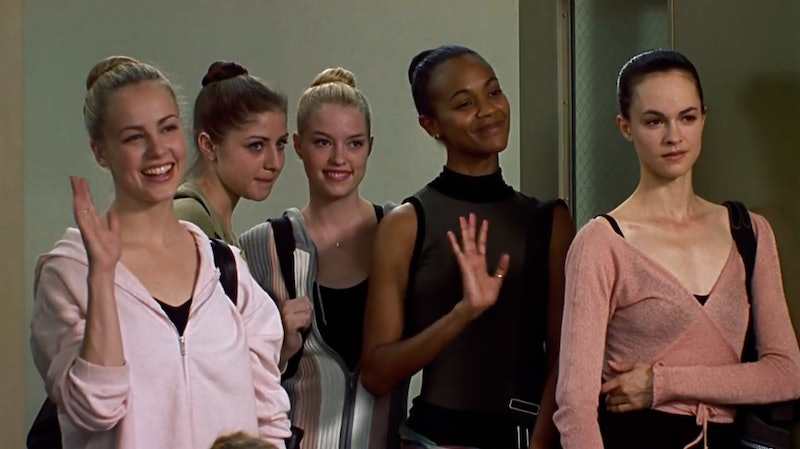 Two decades after driving a motorcycle straight into the hearts of dance movie fans everywhere, Center Stage is heading to the small screen. On Tuesday, May 12, Sweet/Vicious creator Jenn Kaytin Robinson announced plans to adapt Center Stage into a TV series, as part of the films' 20th anniversary celebrations. "Could not be more exciting to be developing one of my favorite movies into a series!!!!" Robinson wrote on Twitter. "Center Stage is perfect. Turn on some Jamiroquai and DANCE."

The Center Stage series will be a modern-day follow-up to the 2000 drama about the lives of a group of students at the prestigious (and fictional) American Ballet Academy in New York City. "[The series] follows a new, inclusive class of dancers as they work to stay at the academy and clash against the traditional students and style the ABA is known for," Deadline reported. Robinson is also planning to bring back one of the film's most iconic characters, Cooper Nielson, played by Ethan Stiefel.

"Ballet has always been a conformist world, but with Cooper Nielson now at the helm of the ABA and the ABC, change is on the horizon in more ways than one," the summary continues, although thus far, Steifel isn't officially attached to the series. (Deadline also reported that none of the show's roles have been cast yet, as the project is still in development.)

While it earned mixed reviews upon its release in 2000, Center Stage has inspired two sequels — 2008's Center Stage: Turn It Up and Center Stage: On Pointe — rumors of a possible TV adaptation have been swirling for years. However, in Vulture's recent oral history of Center Stage, the film's producer, Laurence Mark, explained that Robinson's project is "the first time there’s [been] a serious effort" to bring the ABA to the small screen.

In that same interview, Susan May Pratt — who played star dancer Maureen, who was dealing with an overbearing mother and secret eating disorder — told Vulture that she would love to reprise her role for a potential series. "A few years ago I ran into [Larry], and I was like, 'Hey, I want to be a really mean ballet teacher,'" she recalled. "Of the films I’ve done that’s the one that seems to mean the most. ... It's a lot of people's guilty pleasure."

Even Zoe Saldana, who made her film debut as smart-mouthed Eva Rodriguez, told the outlet that she still gets recognized for her work in Center Stage. "Everybody that comes up to me because they recognize me from things I’ve been in, I would say maybe half of the people reference Center Stage," she told Vulture. "The fact that they’re able to remember it years later makes me feel so good."

While there's still a long way to go before fans will get to see whether the Center Stage series manages to capture all of the grit, glamour and gloriously cheesy dance numbers of the original, it's clear that the ABA will live on in fans' hearts forever. And hopefully, the series will have just as many pairs of leather pants as the film that started it all.