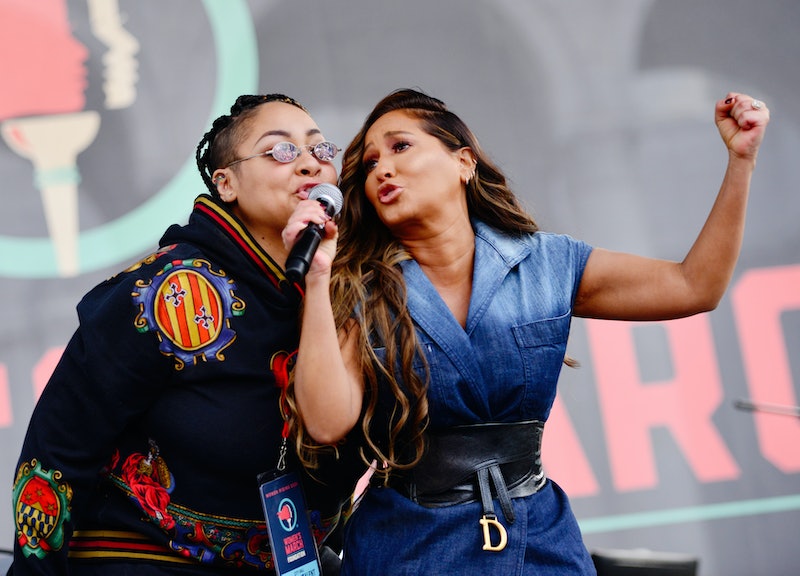 Ever since the Cheetah Girls came into our lives in 2003, girl power has been alive and well. But in 2020, it looks like the group isn't planning on bringing it back anytime soon. A Cheetah Girls reboot probably isn't happening, as one of the stars herself, Adrienne Bailon Houghton, said in an interview on Monday, Feb. 10.

While talking to Entertainment Tonight, Houghton confirmed that a possible Cheetah Girls reboot "has not been discussed at all," and she's a little hesitant to make a new film out of fear of it not being that good. "There's so many things that I'm a fan of and when they redo them, I'm like, 'Pero, why? Why did you feel that that was necessary?'," she said. "Sometimes it's just best to bow out gracefully, let people love it forever. I'd rather people keep wanting it to be done and then it never gets done, versus doing it and they're like, 'They ruined it.'"

Talk about a potential reboot started again when she reunited with co-star Raven-Symoné at the Women's March in January, which she said was very reflective of their characters' personalities. "What I loved most about being in The Cheetah Girls was the message of women empowerment, about girl power and what that was," she remembered. "It was crazy because in my mind, 15 years later, this is exactly where Bubbles and Chuchie would've been, at the Women's March."

The Cheetahs also reunited on another occasion— but without even knowing it. They both competed on last season of The Masked Singer, but as per the show's rules, they didn't know each other's identities — at least officially. “We actually think it’s pretty genius that the producers chose to have two Cheetah Girls on the show at the same time," Houghton said to TheWrap. "It’s actually genius how they kept us from knowing that it was each other and at the same time, it’s like, how did you think they were gonna fool us?”

Despite her hesitation, if she were to reunite once again with Raven for another Cheetah Girls movie, she does have a rough vision for what could happen. "Bubbles and Chuchie take on the world," Houghton told ET. "Maybe we became solo artists and come together years later? I don't know. I'm going to leave the writing to someone else, but that'd be awesome." Let's hope a good script will get Houghton back on board for one last round of girl power, courtesy of the Cheetahs.

More like this
The 'Scream 6' Trailer Shows Off Hayden Panettiere's Return & Ghostface In NYC
By Jack Irvin and Jake Viswanath
Man Meets Politics: ‘Boy Meets World’ Star Ben Savage Is Running For Congress
By Jake Viswanath
'Abbott Elementary' Fans Probably Missed This 'Parent Trap' Easter Egg
By Sam Ramsden
At 28, Rosie Perez Risked Her Career To Stop Playing Stereotypes
By Gabrielle Bondi
Get Even More From Bustle — Sign Up For The Newsletter
From hair trends to relationship advice, our daily newsletter has everything you need to sound like a person who’s on TikTok, even if you aren’t.