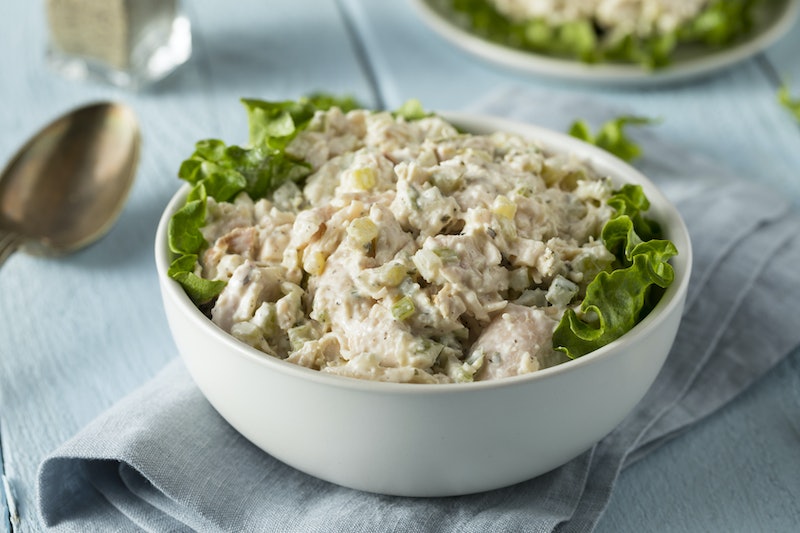 If chicken salad is one of your grab-and-go choices for a quick lunch, here's what you need to know about the chicken-salad salmonella outbreak to keep yourself from getting this nasty food-borne infection. The Centers for Disease Control reported that more than 170 people in seven states have fallen ill with salmonella after reportedly consuming ready-to-eat chicken salad produced by Triple T Specialty Meats Inc., which was sold at Fareway grocery stores. The U.S. Department of Agriculture’s Food Safety and Inspection Service (FSIS) announced Feb. 21 that the Ackley, Iowa, company recalled 20,630 pounds of chicken salad made between Jan. 2 and Feb. 7 after is was suspected that the pre-packaged food was contaminated with salmonella. Bustle has reached out to Triple T Specialty Meats for comment, and will update upon response.

The cases of people affected by the strain have occurred primarily in Iowa, but also Illinois, Minnesota, Nebraska, South Dakota, Indiana, and Texas, according to the CDC. The CDC notes that people "infected with salmonella develop diarrhea, fever, and abdominal cramps 12-to-72 hours after infection." Most people recover in about a week without seeking treatment, but some patients require hospitalization. "In some cases, diarrhea may be so severe that the patient needs to be hospitalized. In these patients, the salmonella infection may spread from the intestines to the blood stream, and then to other body sites," the CDC explains.

"In these cases, Salmonella can cause death unless the person is treated promptly with antibiotics. The elderly, infants, and those with impaired immune systems are more likely to have a severe illness," the CDC notes. The recall has been labeled "Class 1" by the FSIS, which means it's "a health hazard situation where there is a reasonable probability that the use of the product will cause serious, adverse health consequences or death."

The CDC reported that salmonella causes more than one million illnesses, 23,000 hospitalizations, and 450 deaths in the U.S. every year. In the most recent incident there have been 65 reported hospitalizations of people infected with salmonella, but no documented deaths. While the chicken salad is no longer available for sale, officials warn that if you purchased and froze the food you should throw it away to avoid being subjected to a potential salmonella infection.

Chicken salad isn't the only thing responsible for salmonella outbreaks in recent months. There are multiple strains of salmonella, and they all cause pretty unpleasant symptoms. The CDC noted that some people have contracted salmonella from infected guinea pigs while others have been sickened from contaminated kratom, a plant that comes in capsule and powder form and is often used as an opioid substitute for pain relief. Still more people have gotten salmonella from eating tainted sprouts, though, according to the CDC, the sprouts-related outbreak has been contained.

One of the reasons salmonella can spread quickly, according to the CDC, is because reports often aren't received and recorded by public health agencies until two-to-four weeks after the outbreak begins. This happens in part because some people don't see a doctor at all, and others often wait several days to seek treatment. It then takes officials additional time to identify the DNA fingerprint of the outbreak and link reported cases. If you did bring home some of the contaminated chicken, and you haven't gotten sick, it's still a good idea to sanitize all of your hard surfaces. If you did fall ill, cleaning is an important part of making sure you don't transmit the illness to others.

Cross contamination in your kitchen can also make you more susceptible to salmonella. "Because foods of animal origin may be contaminated with salmonella, people should not eat raw or undercooked eggs, poultry, or meat," the CDC advises. They also note to keep track of foods where you might not realize there are raw eggs present, like homemade dressings and doughs, as well as raw or undercooked meat.

This is why is super important to cut your meat and veggies on a separate cutting board. Aside from the significant risk of contracting salmonella, cutting boards can be a breeding ground for bacteria. Reader's Digest reported that your cutting board can contain 200 times more bacteria than a toilet seat, mostly due to feces present in raw meat. If you do get sick with salmonella, or another food-borne illness, you can treat it at home with anti-diarrhea medicine, according to the Mayo Clinic. You should also drink plenty of water. If you don't feel better in a few days it's time for a trip to the doctor to make sure you haven't developed an infection in your blood stream, which needs to be treated with antibiotics. And, If you need another reason not to eat undercooked meat, there's that whole tape-worm-in-the-eye thing. #TheMoreYouKnow.