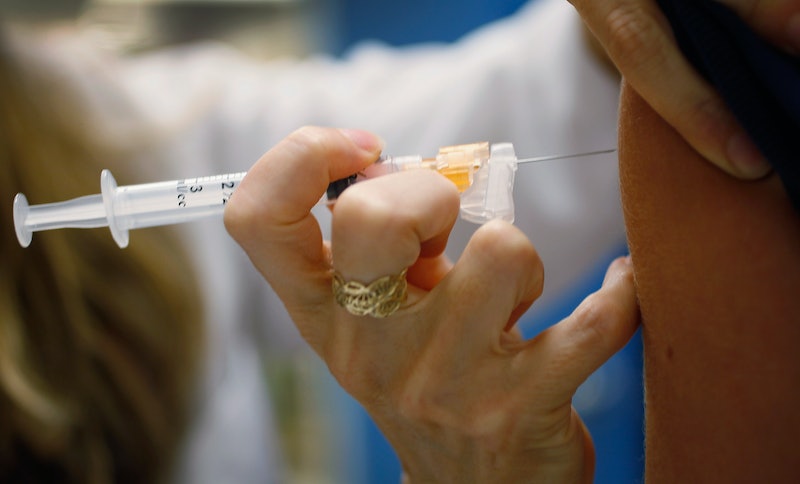 Even though they're extremely common, getting an STI can be a painful experience, and can potentially lead to complications if left untreated. Condoms, dental dams, antibiotics, and other methods are useful in preventing and treating infections, but they're not 100% reliable. That's why preventing an infection in the first place is the gold standard — and a new trial for a chlamydia vaccine shows promise in doing just that. If made commercially available, this vaccine could prevent millions of cases of genital chlamydia, according to a new study published in the Lancet.

This potential vaccine is a big deal. An estimated 2.86 million cases of chlamydia occur in the U.S. every year, according to the Centers for Disease Control (CDC). And the World Health Organization (WHO) says that globally, about 127 million cases were diagnosed in 2016.

According to the Mayo Clinic, some signs and symptoms of chlamydia are painful urination, lower abdominal pain, vaginal/penile discharge, painful vaginal sexual intercourse, bleeding between periods and after sex, rectal pain/discharge, and testicular pain. However, the CDC says most people with chlamydia don’t experience any symptoms, or symptoms may not appear for several weeks after exposure. So people may unknowingly pass it to sexual partners or delay seeking treatment, which has serious health consequences. The Mayo Clinic says that delayed treatment can lead to a high risk of HIV, the virus that causes AIDS, pelvic inflammatory disease, infection near the testicles (epididymitis), infections in newborns (chlamydia can "pass through the vaginal canal to your during delivery, causing pneumonia or a serious eye infection"), and infertility. Condoms help prevent chlamydia infections, but they're not 100% effective, especially when being they're not being used correctly. And the UK's National Health Service says that 95% of people will be cured of chlamydia if they take their antibiotics correctly. That's a significant number, but again, not 100%.

This vaccine could help people on a massive scale. In the trial, 35 healthy women (ages 19 to 45) received doses of one of two experimental chlamydia vaccines, while five received a placebo. It’s important to note that the women were not actually diagnosed with chlamydia. The purpose of this first trial was to determine how safe the vaccines were, and whether they could “trigger the production of antibodies necessary to fight off the bacteria that causes the illness,” according to TIME.

The participants had only mild side effects, like injection-site pain. Both vaccines led to higher levels of vaginal antibodies, which are necessary to prevent chlamydia. This suggests that the vaccine may be successful. Now, the next step is to test the vaccine against actual cases of chlamydia. If those rounds of testing are successful, the vaccine could become commercially available in some countries within five to seven years, Lancet study co-author Robin Shattock, a professor of mucosal infection and immunity at Imperial College London, told TIME. However, he pointed out that the vaccine will become available to "less developed" countries later.

Even if this vaccine gets made available commercially, however, stigma around STIs might prevent it from being made available to everyone. Like the human papillomavirus (HPV) — which is the most commonly transmitted STI in the U.S., according to the CDC — chlamydia is attached to a lot of sex-negative stereotypes. But anyone can get chlamydia, HPV, or any other STI, regardless of who they are or who they’ve had sex with. In fact, even people who haven't had penetrative sex can get an STI.

But the stigma persists. A study published in the Open AIDS Journal showed fear of judgement keeps some young people from STI testing. In a study of 300 young people aged aged 15-24, nearly one-third put off seeking medical attention for more than seven days, and 95% of them believed "my partner would blame me if I had an STD."

Because of stigma and lack of access to resources, some groups are at an increased risk for developing the infection. Black people experience chlamydia at rates 5.6 times higher than non-Hispanic white people, according to the CDC. And in Los Angeles County, health officials are examining how systemic racism and lack of education contributes to STI rates in marginalized ethnic and racial communities.

According to the CDC, nearly two-thirds of all new chlamydia infections occur among young people (15-24 years). And an estimated 1 in 20 sexually active young women (14-24 years) has the infection. Part of this may rest with parents and doctors being reluctant to educate young people — especially girls — about STI prevention. For this reason, Shattock expects the vaccine will be marketed as a “fertility vaccine,” not an STI vaccine, since infertility is one of the risks of delayed treatment. “In the same way that HPV is a sexually transmitted infection, but people are motivated to get vaccinated because they want protection from cancer, we would anticipate that this would be positioned as a fertility vaccine,” he told TIME.

I can personally attest to the fact that there is a stigma for STI vaccines. My mother wrestled with whether or not to allow me to have the HPV vaccine as a pre-teen, because she feared it would make me promiscuous. Concerns about teens’ and marginalized peoples’ ability to access these vaccines suggests that it’s time for legislators and health care providers to help teens gain more autonomy over their own health decisions and fund education, affordable healthcare, and STI testing.

If marketing the vaccine as a fertility vaccine helps more teens and adolescents access it, then I’m all for it. However, it is disheartening to see that access to the vaccine might have to be connected to fertility. Loss of fertility is a serious side effect of chlamydia, but this emphasis can stigmatize sexuality.

The possibility of a vaccine for chlamydia is incredibly exciting, because of its potential to help so many people. However, it's important to be mindful of how stigma and systemic inequities might affect some groups' ability to access the vaccine, if it were to become commercially available. Everyone deserves to be healthy.