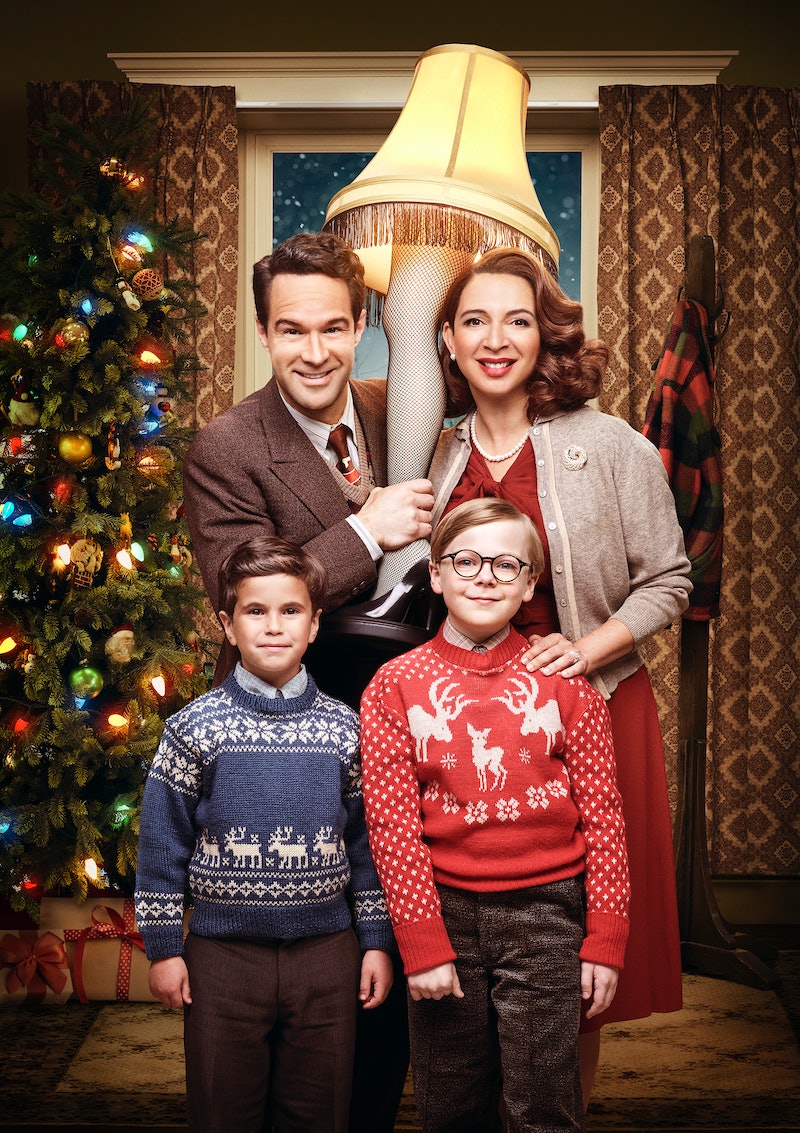 2017 almost snuck by without a single live musical, but A Christmas Story Live is coming on Dec. 17 to save the day. Based on the film adapted from Jean Shepherd's fictionalized anecdotes, the holiday classic is being interpreted by an all-star cast of performers. FOX's A Christmas Story Live cast will remind you of the original, with some familiar performers and new faces.

The musical has music and lyrics by Benj Pasek and Justin Paul — two names you surely know now thanks to La La Land, Dear Evan Hansen, and Hugh Jackman's circus musical The Greatest Showman. They really are having the best year ever, and A Christmas Story Live is that last present hidden behind the tree. The show's book (that's Broadway speak for "script") was written by Joseph Robinette, who was nominated for a Tony and a Drama Desk award when the musical premiered on Broadway in 2012.

If you subscribe to the annual Christmas day tradition of watching the 1983 film from somewhere in the middle to somewhere in the middle during the 24 hour TBS marathon, you've probably memorized the original cast. There are so many hilarious scenes and jokes in this movie that after a while they become part of your blood. And since none of the original cast went on to superstardom, the world seems contained.

The new cast for the live musical looks different in a couple of ways. For one thing, the original film's aesthetic never fully commits to setting the story in the 1940s. There's something distinctly '80s about the hairstyles and the costumes no matter how hard they try. While you'll notice in the original film that Ralphie and Randy's '40s elementary school is integrated, the 2017 cast is also a lot more racially diverse than the movie.

Here's the old cast and the new cast side by side to get you pumped for the musical experience:

Newcomer Andy Walken will take on Peter Billingsley's iconic starring role, and he's got the round face to pull it off.

Ralphie's brother was played by Ian Petrella in the film, and Tyler Wladis seems ready to suffer the trials of being a younger sibling at Christmas.

Probably the most sympathetic character when you watch as an adult, Maya Rudolph is taking on Melinda Dillon's role with presumably a lot of humor and a more period accurate hairdo.

Darren McGavin was hilarious as the curmudgeonly pater familias in the movie, but something about Chris Diamantopoulos (who was recently on Broadway in Waitress) just seems a little more winsome.

If it ain't broke, don't fix it, and Sacha Carlson as the larger than life bully is the spitting image of Zack Ward's villain.

Another iconic look that has been replicated for the live musical is Ralphie's best friend Flick, who infamously gets his tongue stuck to a frozen flagpole.

Other cast for the Fox broadcast includes Matthew Broderick as the narrator. Shepherd himself provided the voice in the original film, but didn't appear physically. Jane Krakowski will play Ralphie and Flick's unimpressed teacher Miss Shields, played by Tedde Moore in the film. Anna Gastayer will play Mrs. Schwartz, who is unseen in the film. The mother of one of Ralphie's other friends, she only appears as a voice over the phone in a pivotal moment. Comedian Ken Jeong will take on Les Carson's role as the Christmas Tree Salesman — and will show up later as the owner of the Chinese Restaurant where the family settles on Christmas night. David Allan Grier will play the aggressive Mall Santa played by Jeff Gillen in the movie, and the group PRETTYMUCH will appear in the live musical as carolers.

Excited to see this new group of performers take on a classic? They have to play these beloved characters and sing as well — but it's hard to mess up a tale as strong as A Christmas Story. This cast should have no trouble at all with a tried and true holiday classic.

More like this
20 Christmas Movie Quotes That'll Get You In The Holiday Spirit
By Alexis Morillo
Lindsay Lohan Just Recalled A Hilarious 'Parent Trap' Story
By Sam Ramsden
These ‘Love Actually’ Plotlines Are “Out Of Date,” According To Director Richard Curtis
By Grace Wehniainen
This Iconic ‘Love Actually’ Scene Drove Alan Rickman “Insane”
By Grace Wehniainen
Get Even More From Bustle — Sign Up For The Newsletter