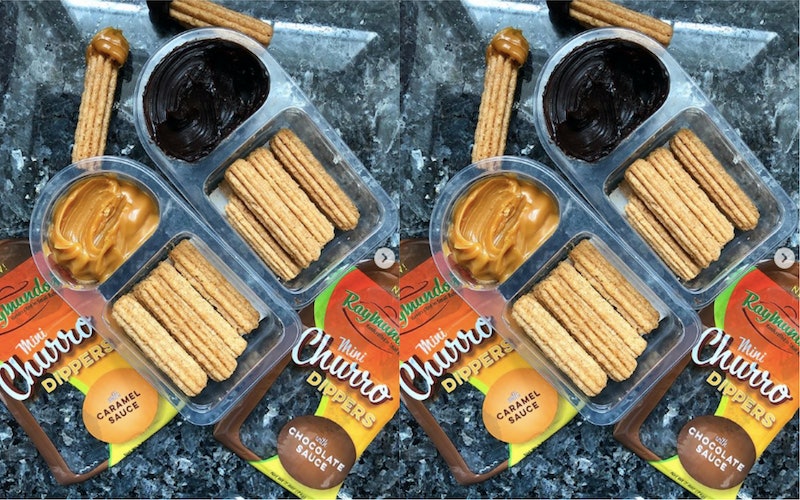 Some of the most iconic snacks of the '90's may be gone, but we'll never forget them (or how delicious they were). French Toast Crunch cereal, Butterfinger BBs, and of course, Dunkaroos. Nothing will ever beat the pure joy of dipping those little cookies into the well of icing (or just eating the icing by itself) or seeing that your mom packed one into your lunchbox. The classic snack was discontinued in 2012 — to the dismay of the inner kid inside all of us — and the shelves have seemed a little bit emptier ever since. Today, they've (kind of) made a comeback in possibly the most mouthwatering way possible: a mini churros version of Dunkaroos.

Junk food review platform JunkBanter took to Instagram to post a shot of the glorious snack, and it looks simply breathtaking. It looks like each individual pack contains about four or five adorable mini churros, and either a caramel or chocolate sauce to dip them into. According to the caption, they taste as good as they look. "The little churro sticks taste like churros if they were turned into a breakfast cereal," JunkBanter explains. Basically, it seems like the snack is a win-win — giving us French Toast Cereal and Dunkaroos reminiscent vibes at the same time.

The deliciousness doesn't end with the churros, because apparently the dipping sauces are equally tasty. "The chocolate is so much darker and richer than even a Betty Crocker cake frosting (almost like a brownie batter), and the caramel sauce is like spreadable Werther’s Original," JunkBanter says in the caption, noting that they were especially impressed with this aspect of the snack. Essentially, you get to eat churros dipped in brownie batter and smothered in rich, flavorful caramel. It's official, Heaven is a place on Earth with churro Dunkaroos.

JunkBanter tells followers that these delightful snack packs are available in the refrigerated section of Giant, a grocery store chain with locations in Delaware, Maryland, Pennsylvania, Virginia, and Washington, D.C. The snack's brand is Raymundo's, which specializes in jello and pudding products. Some of their other popular items are rice pudding, caramel flan, and a crème parfait dessert — it seems like they know their way around all things sweet. "If these expand, I’m confident that Everybody will love Raymundo’s," JunkBanter said on Instagram about the mini churros, and they couldn't be more spot on.

So far, it seems like Giant is the only supermarket chain selling Raymundo's mini churro dippers. We can only hope they hit more stores throughout the country as soon as possible, because we all deserve to get our hands on these. Dunkaroos may be a thing of the past, but that won't stop us from finding, trying, and making similar products to fill the void their absence left in our hearts. If you're in the DMV area any time soon, it only seems appropriate that you'd head to Giant and stock up on a ton of these and maybe even grab a few for your friends — I'm positive that they'd be forever grateful.