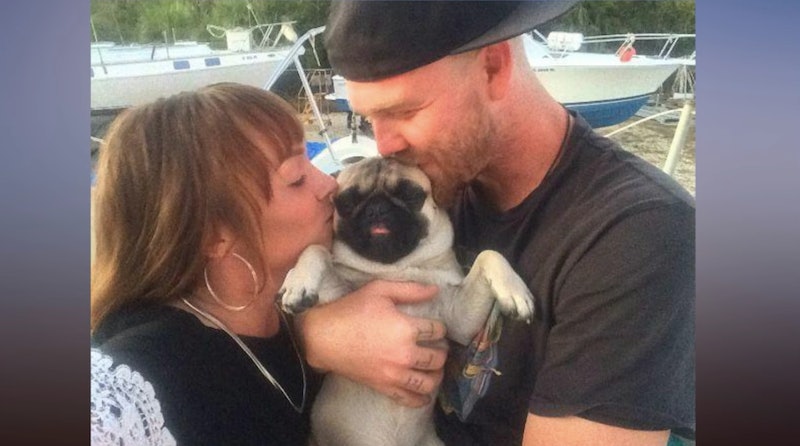 Perhaps you've dreamed of selling all of your material possessions to cruise around the world in a boat. If you have, who can blame you? It's a pretty boss idea. However, just make sure you have insurance — because things can go bad super fast. Case-in-point: One couple sold everything they owned to sail around the world, only to have their boat tragically sink after only two days at sea. Thankfully, the couple survived — but their boat was not so lucky.

The Colorado couple, Tanner Broadwell and Nikki Walsh, decided to pursue their version of the American dream by getting rid of all of their belongings and setting out to see the world with their dog in tow. However, their dream quickly turned into a nightmare when their sailboat sank in John’s Pass just off Madeira Beach, Fla. — only two days into their trip, WFTS ABC Action News reported.

"Travel and do things on our own terms when we wanted to, [I] thought what better way to do it than with a sailboat," Broadwell told WFTS. "We hit something in about eight or nine feet of water and it stopped the boat completely." The couple had just enough time to grab important documents and their dog before they were forced to abandon their beloved boat. "Everything I've worked for, everything I've owned since I was a child, I brought with me. It's just floating away and there's nothing I can do," Walsh added.

Inexperienced sailors, the couple hit rough water in John’s Pass. Due to low visibility, they eventually clipped a buoy, which tore a hole in the bottom of the boat, CBS Denver reported. Even worse, Walsh and Broadwell did not have insurance on their boat, which also doubled as their home and contained all of their remaining worldly possessions. Boradwell told CBS Denver that all of those things can be replaced, but that, "it teaches you a lesson of what really matters to you."

The couple donned life jackets, including one for their pug Remy, and jumped overboard where they waited for rescue teams to arrive. "I had his life vest on him. He was shaking, he was scared," Walsh told CBS Denver. "I was shaking. I’m like, 'Tanner, everything we’ve ever had is gone. Everything we worked for is gone.'" Neither Broadwell nor Walsh currently have jobs, because they were planning to sail around the world.

"I sold everything I had to do this," Broadwell told the Tampa Bay Times, "and I lost everything in a matter of 20 minutes." The Times reported that the couple spent two years saving for their dream adventure. They eventually bought a 49-year-old sailboat and spent $5,000 making it seaworthy. Now, all of their hard work and efforts are submerged in John's Pass.

Though the couple may have been inexperienced sailors, WFTS spoke with local charter boat captain Kenny Keen who said even seasoned sailors have encountered problems in John's Pass. "We've also had several experienced captains hit that from time to time when there's been big storms and they try to get into the inlet and they don't hit the buoy just right." He added that the increasing number of capsized boats poses an additional threat to sailors.

Now Broadwell and Walsh are tasked with removing their boat from the harbor at the cost of $10,000, and Walsh started a GoFundMe account, which has already surpassed its $10,000 goal, to help them with the fees. "We lost every single one of our belongings with no insurance, but we all made it to land alive [and] we are not giving up on our dreams!" Walsh wrote on GoFundMe, adding that any additional money will go toward a new boat. "I’m not going to give up now," Boradwell told the Times. "I’m going to get another boat down the road."

Even though they lost everything they owned, the couple said they are touched by the amount of people who have come out to support them, both virtually and IRL. "People came out of nowhere," Walsh told the Times. "Everyone just started showing up to help us." On GoFundMe she wrote, "Thank you to every single person who donated, you don't know what it means to us."