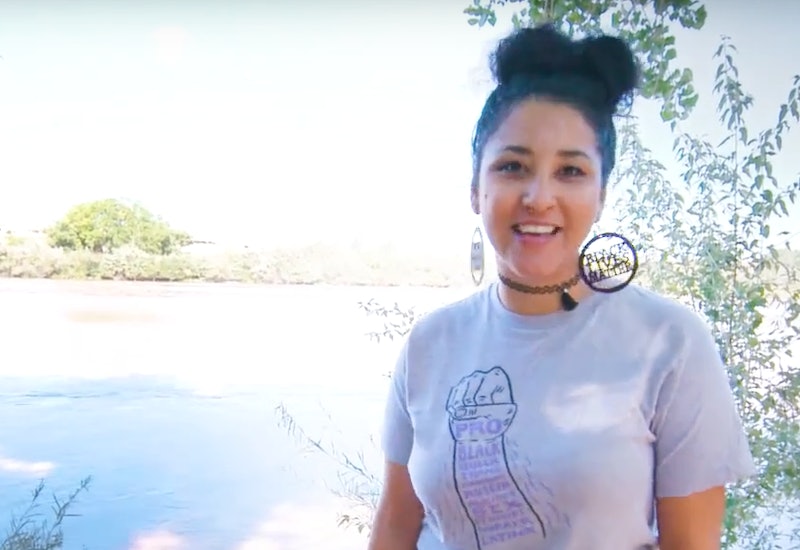 A 33-year-old immigrants' rights and reproductive justice activist was given an order of deportation from an Arizona federal court on Tuesday. Alejandra Pablos was seeking asylum in the United States, where she'd lived as a legal permanent resident with her family since she was an infant. After an arrest invalidated that legal status five years ago, she spent the ensuing years in an immigration battle, fighting to stay in the only country she's known.

"It's extremely difficult to hear the judge yesterday say those words to me that I was deported," Pablos tells Bustle over the phone, adding that she's glad it's over. "Right now, we just literally move on to the next step, which is we have the right to appeal within 30 days."

In a previous interview with Bustle in late October, Pablos said she was "scared as f*ck" that she would be deported to Mexico and away from her family members, who are naturalized citizens. She said she knew it was a reality that she might one day be forced to deport to Mexico — and she refused to stay silent in the face of that possibility, making it a point to share her story with others.

"I know that there's double, triple the corruption there," she said. "I've never lived there. My education and my work history, it’s not going to be really valid. Sure, I can speak English, I'm going to be able to find a job, but I'm definitely going to be a target. People are going to know I'm not from there, and I'm already somebody who has had a high profile deportation case. So there's a lot of fear from all different angles."

As Tina Vasquez at Rewire.News laid out, Pablos was first arrested in 2011 on a drug paraphernalia and DUI charge. She had a green card at the time, but U.S. law states that if a legal permanent resident commits a crime, she may be deported. Pablos spent two years in detainment at Eloy Detention Center in Arizona before being issued a bond for release in 2013.

Everything was going fine after that arrest, in Pablos' telling, until she was arrested again in January at a peaceful protest against Immigration and Customs Enforcement (ICE) raids outside the Department of Homeland Security in Virginia. She was released, but then was detained again for 43 days during a routine check-in with ICE in March. It was that arrest, Pablos told Bustle back in October, that "interrupted everything in my life." She added that she felt targeted by ICE, which she said was trying to "intimidate us and silence us."

For its part, ICE maintains that Pablos' activism did not make her a target for deportation.

"U.S. Immigration and Customs Enforcement (ICE) does not target unlawfully present aliens for arrest based on advocacy positions they hold or in retaliation for critical comments they make," ICE spokesperson Yasmeen Pitts O'Keefe says in a statement to Bustle. "Any suggestion to the contrary is irresponsible, speculative and inaccurate. ICE focuses its enforcement resources on individuals who pose a threat to national security, public safety and border security. We will continue to target criminal aliens whenever and however they come to our attention."

According to the Arizona Daily Star, the judge overseeing Pablos' case acknowledged that she had "never truly lived in Mexico" but said he saw "no clear indication" that she would face persecution for her reproductive rights activism. Abortion in Mexico — with the exception of Mexico City — is only legal in the first 12 weeks of pregnancy and only in the case of rape or if the pregnant person's life is at risk.

With her political asylum application denied, Pablos is now seeking a pardon from Republican Arizona Gov. Doug Ducey. Ducey's office did not immediately respond to a request for comment from Bustle.

"This is not the end of our fight; we will appeal this decision and urge Arizona Governor Ducey to issue a pardon for the arrests that led to my detention in the first place," Pablos said in a statement issued by Mijente, an organization supporting Latinx and Chicanx social justice movements. "Getting a pardon from the governor would significantly increase my chances to be able to continue to fight to stop my deportation and allow me to stay home with my family and community."

Ducey has pardoned just one person in his career as Arizona's governor, a role he has served in for nearly four years. Jacinta Gonzalez, Mijente's senior campaign organizer, tells Bustle she and Pablos recognize what they're up against. "We definitely know that we're set up for a very big and difficult fight," she says, also pointing out that in Arizona, the governor cannot issue a pardon without a favorable recommendation from the state's Board of Executive Clemency.

Pablos says she's still organizing. She urges people to visit keepalefree.org, where you can donate to help with her legal fees, and sign the petition asking the governor for a pardon. She also advises not to panic, because "when people panic, then I panic, right?"

In the October interview, Pablos told Bustle that organizing for reproductive justice and immigrant rights is her lifestyle, because she was forced into it. And in protesting against what she calls "atrocities against immigrants," she’s fighting for herself and her ability to stay in the United States, too. "This is where my family is," she said. "This is where my home is."

This story has been updated.