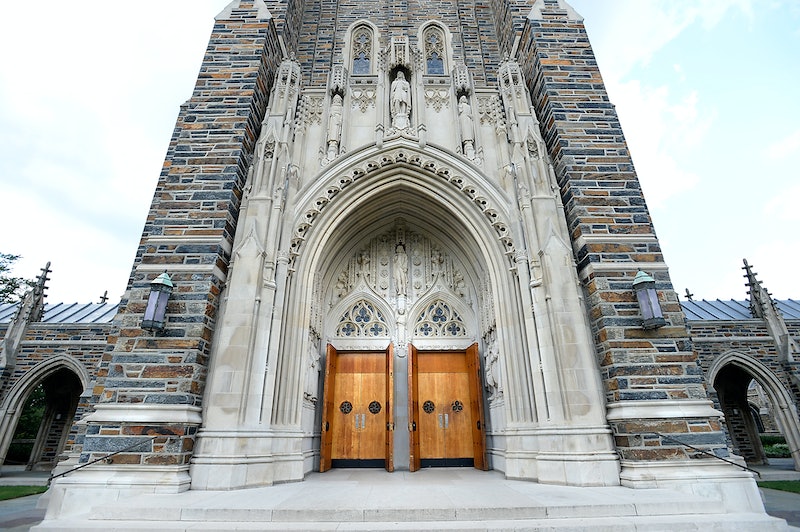 Enrolling in a graduate program abroad is a bold move, especially if the program that you choose takes place in a foreign language. A professor at one of the top-tier American universities took issue with a particular group of foreign students unwinding in their native language, though, and it cost her a position as head of a master's program. Specifically, a Duke professor stepped down after asking Chinese students not to speak Chinese in the university's common areas, although she will keep her job as an assistant professor at the university.

The professor, Megan Neely, reportedly sent an email asking Chinese students to refrain from speaking their native language to students in Duke's Master of Biostatistics program, of which she was the director. In the email, she described how two faculty members in the program, who came to her to complain about "a small group of first-year students who they observed speaking Chinese ... VERY LOUDLY" in the common areas of a university building. The faculty members, Neely wrote, wanted to know who these students were "so they could remember them if the students ever interviewed for an internship or asked to work with them for a master’s project."

"They were disappointed that these students were not taking the opportunity to improve their English and were being so impolite as to have a conversation that not everyone on the floor could understand," Neely wrote in bold, underlined text, according to CNN.

Bustle has reached out to Neely about her comments.

“I deeply regret the hurt my email has caused,” Neely told Duke's student newspaper, The Chronicle.

Neely then implored the students to think about the "unintended consequences" that speaking their native language at the university could have on their professional futures.

"I have no idea how hard it has been and still is for you to come to the US and have to learn in a non-native language. As such, I have the upmost respect for what you are doing," Neely wrote. "That being said, I encourage you to commit to using English 100% of the time when you are in Hock or any other professional setting."

After images of the email were posted on Twitter, Neely's request quickly went viral and was met with a strong negative reaction from Twitter users, Chinese social media, and Duke University organizations alike, according to USA Today.

After a group of Duke students created a petition to start an investigation into Neely's behavior, the Duke University Medical School dean issued an apology, as The New York Times reported.

“I understand that many of you felt hurt and angered by this message. To be clear: There is absolutely no restriction or limitation on the language you use to converse and communicate with each other," Dr. Mary Klotman wrote in her apology. "Your career opportunities and recommendations will not in any way be influenced by the language you use outside the classroom.”

It also emerged on Twitter that Neely wrote a similar email in February 2018. Even so, several foreign students from the masters program in question voiced their support for her to the BBC.

"Dr Neely is a great instructor and definitely not a racist, not even close," one Chinese student told the BBC.

"Megan is truly the best instructor and mentor I ever had," another Asian student told the BBC. "She made a mistake, but we still know what was her intention and how much she cares about us."