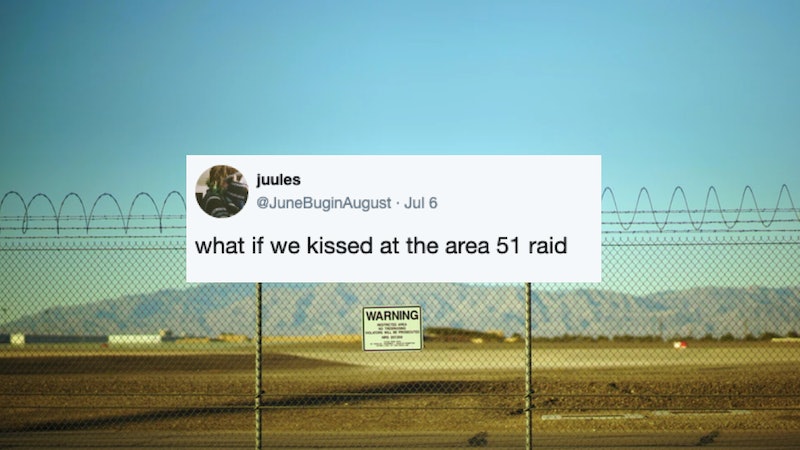 Well, it was only a matter of time. Facebook is full of people writing about conspiracy theories, and when you mix Facebook's events feature with a particularly popular conspiracy theory about aliens, what do you get? That's right, over 400,000 people RSVPing to storm Area 51. Their reasoning? "They can't stop all of us."

In fact, the event listing is called "Storm Area 51, They Can't Stop All of Us". The description reads, "We will all meet up at the Area 51 Alien Center tourist attraction and coordinate our entry. If we naruto run, we can move faster than their bullets. Lets see them aliens."

For those unaware, a Naruto run refers to the title character from the Japanese anime television season Naruto. Naruto has a distinct running style in which his arms are straight and positioned behind him and his back and head are titled forward. Presumably, this type of running will help the 400K guests break into the military facility — that may or may not be housing aliens and alien paraphernalia — more effectively.

It's clear from the reference to a Naruto run that this event is a joke — at least for the people who created it. One of their screen names is even "Sh*tposting cause im in shambles" and the event page has memes posted on it. That said, over 400,000 people have RSVP'd, so I'm not convinced that all of them are in on the joke. That's simply too high a number to not have a few people who think this is really a good idea hanging out in there. Guess we'll have to see what happens when the event kicks off on September 20 at 3 a.m. And that's PT, not ET!

For real, though, please don't do this.

This video of clips from Beyond Belief: Fact or Fiction is perfectly used here. (And is really just amazing on its own, too.)

A "V-J Day in Times Square" for the next generation, if you will.

This clip from Camp Rock instructs everyone on how they will enter Area 51 and raises the question: Have the Jonas Brothers RSVP'd yet?

You steal one little alien and suddenly you're having to attend to its every need.

Go For The Aliens...

... leave with a new clubbing outfit.

This Meme Popped Up

The internet is a strange, strange place, but if there's one lesson to be learned out of all of this it's this: Making memes about Area 51 from the safety of your own home is a better idea than heading off to Area 51 yourself.