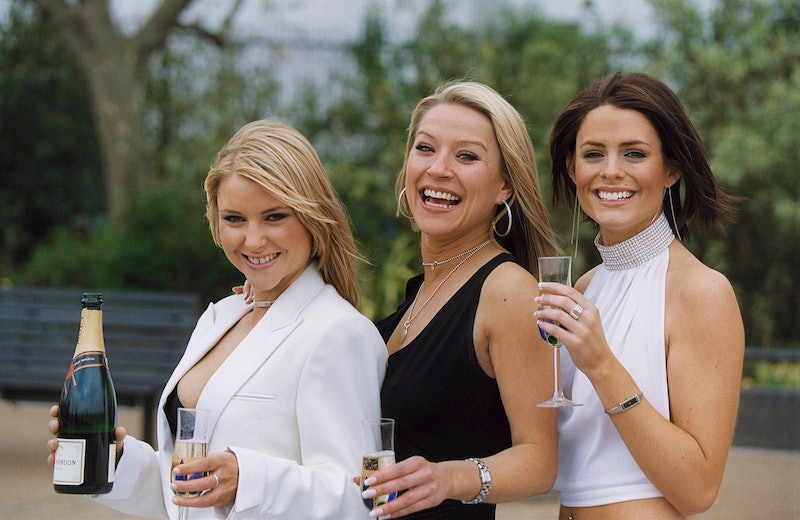 If you're a Brit of a certain age, chances are you remember Footballers' Wives being on TV. I watched it when I absolutely wasn't supposed to (my mum would have killed me; I was 11), and remember every episode. From the one where Tanya killed Frank to the moment Amber faked her own kidnapping (so dramatic). So when I heard the news that the show was coming back soon, I was very intrigued. Here's everything you need to know about the Footballers' Wives musical.

So, the first question is: how did this all come about? Well, it's all down to the #WagathaChristie scandal. It seems as though the recent real life drama between Coleen Rooney and Rebekah Vardy has inspired an appetite for more of the on-screen storylines that we so adored back in the early noughties. The news of an upcoming musical was revealed when one of the show’s original co-creators, Maureen Chadwick, confirmed it to Radio Times on Oct. 20. Little has been revealed about the show so far, but here's what we know...

When will it start?

I've reached out to representatives to find out what I can about the show, including when they're planning to have an opening night, but have no yet heard anything back. However, according to the Radio Times, it should hopefully be hitting theatres in 2020.

Aside from Chadwick, we know that Kath Gotts will also be joining the production team, heading up music and lyrics.

Who's in the cast?

Workshopping for casting begins at the end of the year, but the OG cast members from the show are unlikely to be starring.

According to Radio Times the show will based on some of the original storylines from the first series, with Tanya and Jason's marriage taking centre stage. Along with this, we should see "groupies, meddling club chairmen, deception, betrayal, and murder." I can't wait.

Is the TV show also getting a reboot?

Sadly, no. Well, not for now at least.

Former producer and writer for the show, Liz Lake told RadioTimes.com that she would go back to Footballers Wives “in a heartbeat.”

“If there’s an appetite for it, and enough people want it, it would be worth having that conversation,” she said. “Whatever job I do, I get people telling me they loved Footballers’ Wives. It was an escape and a bit of refreshing camp, but it was still really bold storytelling."

Lake continued: “I think we’d prefer to have an update than a reboot, a revival moving it forward. It’s more than just nostalgia, it’s about seeing what life is like now. Don’t think I haven’t thought about it – I’ve had various moments where I’ve thought, ‘Gosh, wouldn’t it be good to do a special tie-in with the World Cup or something?’”

Unfortunately, the show's main star Zoe Lucker (who played Tanya) may not be as up for it as Lake, commenting that she would worry about the new show living up to the OG.

"The thing that would worry me was if there was to be a reprise, what if it wasn’t as good? I always panic about that. The fact that people still talk about it the way they do, I would hate for any of us to go back and for any of us to be disappointed and it would be such a shame," she explained.