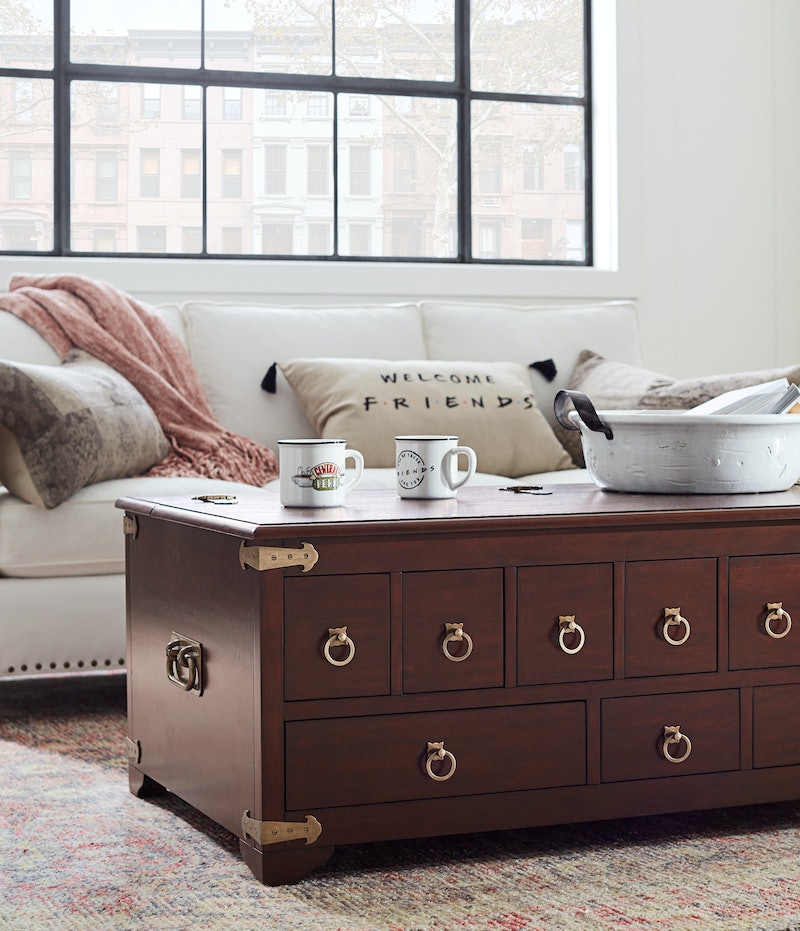 Ever wanted your apartment to feel a little more like Monica Geller's? Well, the time has (almost) come for your dreams to come true. Pottery Barn is releasing a Friends collection of furniture and home accessories inspired by the series. Phoebe will hate it. (Well, at least at first.)

The full list of items has not been released yet, but a promotional picture from Pottery Barn shows a Friends mug, a Central Perk mug, a pillow that's printed with "Welcome Friends" in the classic Friends font, and an apothecary table.

It's that last item that is the most tied to both Friends and Pottery Barn. As noted by PopSugar, there is an episode of Friends from Season 6 titled "The One with the Apothecary Table". In the episode, Rachel gets an apothecary table from Pottery Barn, but tells Phoebe, who is her roommate at the time, that she got it at a flea market because Phoebe hates Pottery Barn. At the end of the episode, Phoebe comes around on the chain after spotting a lamp she wants, which makes sense considering the episode was literally product placement for Pottery Barn. Anyway, the apothecary table is about to be back, so if you missed it before, now's your chance.

In addition to the new home goods, Pottery Barn is also marking the Friends anniversary by giving away a trip to Los Angeles for one lucky winner and their guest. The getaway — called The One with the Free Trip to LA — includes airfare to Los Angeles for two, hotel accommodation, admission to the Warner Bros. Deluxe Studio Tour, which includes a visit to the Central Perk set, and a $1,000 Pottery Barn shopping spree. That's a lot of mugs. Or maybe one apothecary table.

The entry period for the giveaway is now through September 30. Entries can be submitted here with an email address and zip code, and the official rules can be read here.

Pottery Barn's Friends collection will be here soon, but if you can't wait to Friends-isfy your apartment, try hanging a Magna Doodle on the back of your front door or putting a frame around the peephole. A replica of that French poster in Monica's apartment can be found online. Or, if you really want to go for it, you could paint the walls purple and buy this very expensive white dog sculpture like the one Chandler and Joey had.

Yeah, probably best to wait and get one of the mugs.